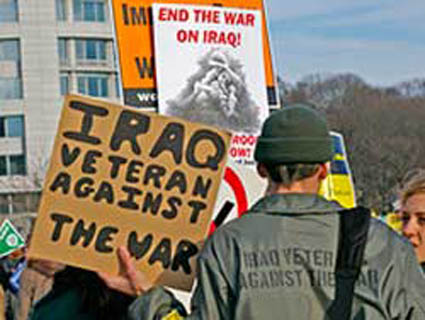 On the fourth anniversary of the start of the Iraq War, in March 2007, Marines Adam Kokesh and Cloy Richards joined a group of other Iraq Veterans Against the War in a mock combat patrol in Washington, DC. Wearing fatigues, a uniquely powerful symbol at a war protest, they pretended to arrest fellow protesters, throwing them to the ground, zip tying them, and leading them away. Other IVAW members passed out fliers explaining the guerrilla theater and noting that it wasn’t sanctioned by the military.

Not long after, the two Marines, both of whom had served tours in Iraq, were notified that they were under investigation for potential violations of the Uniform Code of Military Justice. The code mandates that soldiers who wear uniforms at political events may be penalized with an “other than honorable” discharge, one step above a dishonorable discharge; they can lose health benefits and be forced to repay grants, including GI bill assistance.

The probe came even though technically, Kokesh and Richards weren’t bound by the UCMJ at the time of the protest: They were part of the Individual Ready Reserves, a group of soldiers who’ve left active duty but still have time remaining on their eight-year military contracts. IRR status is mostly unpaid, and legally civilian.

Kokesh promptly fired off an email to his deputy commander, refusing to cooperate with an investigation he viewed as “political harassment.” He wrote, “I am deeply offended by the attempt to keep me under the thumb of the organization to which I pledged my life and served so devotedly.” The commander responded that Kokesh was being recommended for discharge; Kokesh, in turn, demanded a public hearing. At the hearing, in June 2007, with throngs of supporters and media standing outside the Marine Corps Mobilization Command in Kansas City, a panel of officers imposed a general discharge—the military equivalent of a C-minus report card, but with benefits intact.

For Richards, events unfolded differently. He had too much at stake to fight, having been recently diagnosed with 80 percent combat disability: He had sustained a brain injury during a mortar attack, was on the waiting list for knee surgery after an accident involving a cannon, and had attempted suicide multiple times due to severe PTSD. Upon learning of the investigation, he stopped wearing his uniform at protests.

The number of vocally anti-war soldiers appears to be growing. The IVAW alone signs up 12 to 15 new members each week; one-third of their 1,300 members have joined since February. Appeal for Redress, an online petition to end the war, has gathered more than 2,200 soldiers’ signatures since late 2006. “You take an average group of soldiers and ask them, ‘Is the war worth it?’ and you get close to a majority saying it is not really necessary or viable,” says David Cortright, author of Soldiers in Revolt: GI Resistance During the Vietnam War, who has been touring and speaking at bases. “The anti-war sentiments are much more pervasive now in Iraq.”

As a result, soldiers say, the military is increasingly trying to silence them with formal threats as well as less official intimidation techniques: At their own discretion, commanders can enact “non-judicial punishments,” such as imposing a diet of bread and water, enforcing longer work hours, and requiring intensive physical activity like hauling sandbags back and forth or running for hours in full gear.

“There has definitely been an uptick in complaints,” according to Mike Lebowitz, Kokesh’s lawyer and a National Guard officer, who receives up to five emails per week from soldiers or their families seeking legal advice related to anti-war activities. He specializes in military free speech. “The military is infamous for punishing people for expressing political beliefs,” he says. “The intimidation or threat of ramifications to soldiers is very pronounced.”

In the heyday of the GI protest movement during the Vietnam War, draftees might have been thrilled to be threatened with a discharge; a popular underground cartoon depicted a soldier refusing to fight, with the caption, “What are you going to do, fire me?” In today’s volunteer force, many enlistees are career soldiers who can be fiercely protective of their benefits, pensions, and wages—which, advocates say, makes them more vulnerable to intimidation.

Even some historically conservative veterans’ organizations say limits on speech have gone too far. “I may disagree with [these soldiers’] message, but I will always defend their right to say it,” says VFW head Gary Kurpius. In the Kokesh case, he says it’s clear that the military is “trying to hush up and punish” the reservist, via “a form of first-amendment-rights suppression.”

To be sure, when they enlist, soldiers knowingly forfeit some of the freedoms they enjoyed as citizens. The military is required to maintain political neutrality; political activity is allowed only when soldiers are off duty and out of uniform, and if they make it clear they are not speaking on behalf of the military. But enforcement of these rules, soldiers say, is haphazard, with charges such as “disloyalty, contempt, and unbecoming behavior” applied disproportionately for anti-war activities. (The UCMJ’s Article 134 gives the brass a great deal of leeway, allowing punishment for any activity that “threatens good order and discipline” or brings “discredit upon the armed forces.”)

In February, the Pentagon reissued its official directive regarding soldiers’ political activities, as is common during election years, with a few additional restrictions. Soldiers, it said, can write letters to the editor, but they can’t participate in organized letter-writing campaigns; nor can they display political signs larger than bumper stickers on their cars. While on duty or in uniform, they can’t use “contemptuous words” when describing high-ranking government officials or participate in partisan campaigns. Most notably, the rules for the first time apply to National Guard and Reserve soldiers, who are being deployed at unprecedented levels.

“It’s hard to explain how much the military has control over your entire life,” says Sergeant Selena Coppa, a career Army soldier and single mom. She faced retaliation starting in 2007 after criticizing the war to fellow soldiers and at an IVAW protest. The Army launched an inquiry, but she was never formally charged. “The investigation was seamless and easy,” says Coppa. “It was the informal retaliation that was severe.” According to Coppa, one superior officer threatened to have her committed to Walter Reed’s psych ward. He also claimed he’d provide her ex-husband, against whom she had a restraining order, with her address. Fearing reprisal, Coppa didn’t report the threats, which means there is no paper trail of the incident. But, she says gravely, “It is not unreasonable for a soldier to not want to speak out against the war.”

Army spokesperson Lt. Colonel Anne Edgecomb says her office is unaware of instances of informal retaliation and states that such behavior “would undermine good order and discipline” among the ranks. But, she adds, “If someone is unwilling to operate within the prescribed limitations, he or she should not join in the first place.” Aside from appearing before a discharge review board, there are few avenues for recourse in disciplinary matters. Filing a report with the Pentagon’s inspector general’s office leads to an investigation involving unit command, which many believe will instigate more harassment. According to Lebowitz, “The public won’t hear about 95 percent of these cases because soldiers just want to quietly resolve them and move on, with as few repercussions as possible.”

Under the Military Whistleblower Protection Act soldiers may take their grievances to Congress, but that involves risks as well. The Appeal for Redress site explains in great detail that soldiers who sign are protected by the Whistleblower statute. Even so, founder Jonathan Hutto says many are still too scared to sign. Seemingly with good reason: After signing the appeal last year, and shortly thereafter vocalizing her thoughts on the war to the New York Times, Air Force Sergeant Tassi McKee was suspended from her work assignment, stripped of her security clearance, and interrogated by superiors. Her complaint to the IG earned her back her military assignment, but her reputation among superiors remained tarnished.

Since his hearing, Kokesh, who now studies political management at George Washington University’s graduate school, has received scores of emails from soldiers and veterans thanking him for speaking up. He testified before Congress last May about his experience and has participated in numerous IVAW events—in uniform. Even Richards, inspired by Kokesh, has found a way to keep protesting, but through poetry, and much farther from the limelight.

*Correction appended: An earlier version of this story neglected to mention the fact that Air Force Sergeant Tassi McKee spoke out to the New York Times about her thoughts on war after signing the appeal, which contributed to her being apprehended.