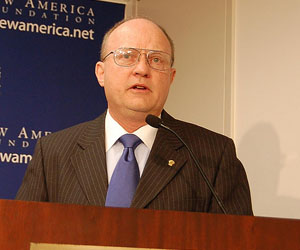 Mother Jones: Of all the things the Bush administration leaves behind, what’s the hardest one to fix?

Lawrence Wilkerson: The executive branch precedents that he, Cheney, and David Addington have established—which severely disturb the balance of power among the three branches of government. Candidates for the Oval Office can say, now, that they will reverse these precedents, but once in the presidential seat they will be very reluctant to relinquish power. This is not good for our republic.

LW: Our diminished reputation—close Guantanamo, denounce torture, restore habeas corpus, and declare, as John Kennedy did, that America is back to her time-honored tradition of not starting wars.

MJ: What would you say have been the president’s most notable policy failures, foreign and domestic?

Domestic failures? A profligate management of fiscal affairs and a collapsing economy; no action on the huge unfunded liabilities the nation confronts—Medicare, Medicaid, and Social Security leading the way—emergency disaster relief as in the responses to Katrina and Rita; no action whatsoever—other than negative action—on the nation’s energy needs for the future coupled with a sustainable environmental protection program, including actions to begin to deal with planetary warming; and absolutely no tax reform worth a farthing—in fact, the tax system is worse now than ever in our history.

MJ: Is the damage caused by any of these failures irreparable?

LW: The damage the Bush administration accelerated majorly with regard to the economy will endure for a decade or more, and the lack of action on energy and the environment may be devastating.

MJ: Which problem created by the administration most urgently needs addressing?

LW: Energy and the environment and the economic morass the Bush administration leaves behind—a morass that clearly has its beginnings well before Bush but, as I said, was majorly accelerated by him.

MJ: What lessons about leadership should the next president glean from the past eight years? What are the dos and don’ts?

LW: Leadership from the Oval Office—and sustained, effective use of the bully pulpit—is essential to getting the American people off their too-pampered butts and into meeting successfully the long-haul challenges of fixing major problems in the very fabric of our republic’s life, both domestically and in our international relations.

MJ: What legacy of the Bush administration will still be felt 50 years from now?

LW: Lack of positive action on energy and the environment and profligate and irresponsible spending with no commensurate action to deal with looming liabilities.

LW: To give the administration some credit, we did make a significant shift in focus under this administration, once it was awakened by the attacks of September 11, in the struggle against global terrorism—which had been transpiring since the fall of the Shah in Iran in 1979. We moved from a strictly law enforcement focus to a more robust focus that included the military instrument in an effective way in Afghanistan. However, the lack of an accompanying strategy to use the other elements of our national power—predominantly our ideas through an effective public diplomacy—has almost nullified the other gains. So, on balance, I believe we are about in the same place with regard to the dangers of global terrorism. That is to say, we will be attacked again because though we have made tactical progress in disrupting our principal enemy, Al Qaeda, we have not made strategic gains in eliminating the reasons for such a group to exist and prosper. In fact, we have lost ground strategically. If any effort in the world has gained ground strategically, it has been the effort by moderate Muslims in the world to denounce and cease support for Al Qaeda. That effort has prospered despite US lack of attention to supporting it in meaningful ways and despite US actions, such as in Iraq, that made that effort all the more difficult to carry out successfully.