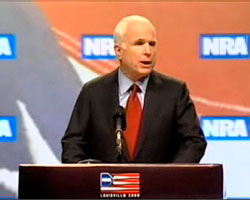 Have two lobbyists who work for John McCain’s campaign—one as national finance co-chairman, the other as co-chairman of the campaign’s Sportsmen for McCain committee—violated the campaign’s conflict of interest policy?

In May, when the campaign was being hit by one news story after another about lobbyists working on its staff, campaign manager Rick Davis (who is now on leave from his own influential lobbying firm, Davis Manafort, and under fire for his past connections to Freddie Mac and Fannie Mae) issued conflict rules that banned any active lobbyist or foreign agent from being a paid employee of the campaign. Lobbyists and foreign agents, though, could work for the campaign as part-time volunteers, as long as they did not participate in policy-making regarding the matters on which they lobby. Another provision declared that “no person with a McCain Campaign title or position may participate in a 527 [campaign committee] or other independent entity that makes public communications that support or oppose any presidential candidate.”

That rule that may cause trouble for the campaign and two of its prominent supporters, Wayne Berman and James Jay Baker, who are lobbyists for the National Rifle Association, for the NRA recently began airing harsh attack-ads against Barack Obama.

Berman and Baker work at the powerhouse lobbying shop Ogilvy Government Relations, where both are managing directors. According to the most recent Senate lobbying reports, the pair are registered lobbyists for the gun rights group. (Another Ogilvy lobbyist working for the NRA, Moses Mercado, has advised the Barack Obama campaign on a volunteer basis.) Berman—whose bio on the firm’s website describes him “as one of Washington’s quietly influential insiders on both domestic and foreign policy”—co-chairs McCain’s national finance committee. Baker, a former NRA official, co-steers (with Minnesota governor Tim Pawlenty and former Oklahoma governor Frank Keating) the campaign’s National Steering Committee of Sportsmen for McCain.

This month, the NRA—one of their many clients—launched a multimillion-dollar television ad assault against Barack Obama. One of the NRA ads shows a hunter claiming that Obama supports a “huge new tax” on “guns and ammo” and wants to take away guns and ammunition commonly used by hunters. (The Washington Post awarded the ad three Pinocchios for blatantly misrepresenting Obama’s stance on guns.) On its website, the NRA recently had headlines reading “Barack Obama—Lying Rabble Rouser” and “Barack Obama Encourages Supporters to Lie About His Gun Ban Record.”

The McCain conflict policy that prohibits McCain backers with a campaign title from being involved with an independent entity that runs ads for or against any presidential candidate seems to cover Berman and Baker, who are lobbying for an independent group that is airing TV ads blasting Obama. Yet there has been no announcement from the McCain camp regarding any change in their positions within the campaign.

Asked whether he might be in violation of the campaign’s conflict rules, Berman told Mother Jones, “Hmmm, I hadn’t thought of that.” He said he was currently lobbying for the NRA but not involved in the group’s campaign activities. “I’m in full compliance with campaign policy,” he maintained. “I will check over there….I will continue to be in compliance. If that requires me to make changes, I’ll make them.” He added, “You’ve done me a favor” by raising this issue.

Neither Baker nor the McCain campaign responded to requests for a comment.