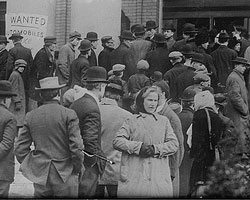 The crash of 1929 and the ensuing Great Depression imprinted an enduring image on the American imagination: millions of jobless workers on breadlines. By 1933, more than 25 percent of the US workforce was unemployed. This fact, more than anything else, locked the national economy in a state of depression, and the country in a state of hopelessness.

Despite the lessons of history—and despite the grim unemployment numbers released October 3—Congress included no meaningful job creation initiatives in the legislation it passed in response to the financial crisis. Instead, in the days preceding and following the $700 billion Wall Street bailout, Senate Republicans and George W. Bush repelled the modest measures approved by the House to help the unemployed and the poor. In doing so, they once again showed where their true loyalties lie.

While unemployment has increased every month this year, the September figures were the worst yet, exceeding all forecasts. According to the Department of Labor, employers cut 159,000 jobs—more than double the number for August or July, and the largest monthly decline since 2003. And the survey on which these numbers is based was conducted during the week of September 8—before the worst developments in the credit crisis, and long before the stock market entered its current freefall.

The current unemployment rate of 6.1 percent measures only a fraction of the truly unemployed, because it only counts those who are out of work and actively looking for a new job. It also does not reflect the people working part time because they cannot find full-time work, which has increased to more than 1.5 million in September, compared with 400,000 a year ago. And even those with jobs are suffering losses. In the last year, the increase in weekly pay for workers has risen only 2.8 percent, while inflation has been about 5 percent. The New York Times‘ David Leonhardt points out that “unlike some other indicators, like gross domestic product, the jobs statistics describe the tangible effect that the economy is having on households.”

More ominous is the broad-based nature of the job losses. They began in the hard-hit industries like construction and real estate, but they have extended to manufacturing, retail, and hotels and restaurants, and are likely to deepen and widen in the coming months.

Writing in the New York Times, Princeton economist Alan Kreuger predicted that “this financial crisis is likely to threaten middle- and upper-income jobs to a greater extent than has been the case in past recessions.” First to go, Kreuger projected, will be jobs producing durable goods that are purchased on credit—and already, auto sales are crashing. Next will be high-skilled jobs that depend upon investments in “new plant and equipment, especially high-tech information and computing equipment.”

Aggressive job creation is likely to be vital to any effective recovery effort, just as it was in the 1930s. In a concise report issued last Friday, the Center for Economic and Policy Research recommended a “coordinated fiscal stimulus…on the order of $300 billion to $400 billion (2.0-2.7 percent of GDP),” which is “essential for counteracting the sharp falloff in consumption.” This money would be spent on “aiding state and local governments, extending unemployment benefits, tax rebates to low income individuals, accelerating infrastructure spending and support for energy conserving retrofits of homes and businesses.” CEPR directors Dean Baker and Mark Weisbrot noted:

It is possible that even larger boosts to spending may be necessary to restore normal economic activity. The federal government must be prepared to spend whatever amount is needed to keep the economy creating jobs. This was the main lesson that we learned from the Great Depression. Concerns over deficits prevented the government from taking sufficient measures to boost the economy out of its slump until World War II left the government no choice. It would be an enormous tragedy for the country and the world if the United States were to repeat the same mistakes almost 80 years later.

This, of course, is basic Keynesian economics—the idea that when hard times make people stop spending and money stops flowing, the government should expand the money supply and start spending money itself, “priming the pump.” After the 1929 crash, Republican Treasury Secretary Andrew Mellon advised the government to cut spending to balance the budget, and left desperate banks, businesses, and families to fend for themselves because it would “purge the rottenness out of the system.” But Keynes said he did “not understand how universal bankruptcy can do any good or bring us nearer to prosperity,” and he insisted that there was “no hope of a recovery except in a revival of the high level of investment.” The most fundamental way to do this is by creating decent jobs that give people money to spend and restore confidence in the economy—something that was done to a degree through New Deal programs, and then more completely through wartime spending.

What we have today, it appears, is a Keynesian policy for banks and big businesses, and the Mellon plan for everyone else. This is consistent with the longtime Republican approach, which offers government support to corporations and the rich in the name of stimulating the economy but denies it to the working people who actually create the wealth.

While Congress and the president, under the leadership of Treasury Secretary (and former Goldman Sachs CEO) Henry Paulson, managed to come up with a $700 billion infusion for the financial industry, it couldn’t find a tenth of that to create new jobs or put a few more dollars in the pockets of the neediest Americans. In the first week of September, the House passed an economic stimulus package that would have spent a relatively modest $56 billion on public works projects—not only creating jobs, but also rebuilding infrastructure and promoting alternative energy—along with expansions of food stamps, children nutrition programs, senior meals, and low-income heating assistance, and payments to the states for Medicaid costs. It also would have extended unemployment benefits, which by one estimate will run out for more than 800,000 Americans in the month of October.

But Senate Republicans blocked a procedural vote (without much fight from Senate Democrats), leaving the intended beneficiaries to twist in the wind. And Bush had promised to veto the bill. A statement from the White House declared that “record spending that could lead to record tax increases or higher deficits will not advance our economic recovery.”

In an October 7 fact sheet on “Taking Urgently Needed Action to Stabilize Our Markets,” the White House elaborated on its plans for helping jobless Americans. “President Bush calls on the next Congress,” it states, to “encourage more job creation by making all of our tax cuts permanent.” Another “boost” to “American businesses and workers,” it says, could come from “approving our pending free trade agreements with Colombia, Panama and South Korea.” The following day, White House press secretary Dana Perino offered another plan: The “best way to help” unemployed people, she said, is for those people to “get back to work.”

Ignoring job creation could doom any chance at a real recovery. And this week, House Democrats announced that they are working on economic stimulus legislation that could be taken up when Congress returns to Washington after the November 4 election. Pelosi mentioned a $150 billion plan that would focus on job creation and complement the $700 billion rescue plan for Big Finance. On Monday, Barack Obama released a “rescue plan for the middle class” that would give businesses a $3,000 refundable tax credit for each American job created and finance public works projects that the campaign estimates will create or save one million jobs.

In the near term, jobs-centric economic stimulation is needed to get money flowing and to prevent the rise of even more troubling unemployment. And over the long term, as MSNBC’s financial columnist Jim Jubak argues, job creation is vital to the nation’s economic stability:

Everyone I talk to glibly says, “Well, I’ll just have to work longer.” At what jobs? In an economy in which companies regularly find ways to replace higher-paid older workers with younger employees, most people won’t be able to stay at their current jobs. And in an economy that is exporting its meat-and-potatoes manufacturing jobs and their higher wages and generating mostly lower-paying jobs to replace them, post-retirement workers are going to be competing with a horde of anxious younger workers for even ill-paying, no-benefit, part-time work.

We need Washington to wake up and realize that, yes, we need to create jobs to pull us out of the current economic slowdown but we also need to create jobs to fix the holes blown in the retirement plans of tens of millions of Americans by this financial crisis. We need not just jobs now but a coordinated national effort—public and private—to create long-term job growth for decades to come.

At my age, in other words, I’d better get on line for a job at Walmart—which won’t do much for any economic recovery.