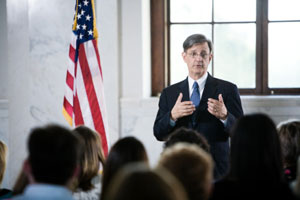 In 2002, Republican Rep. Saxby Chambliss was running against Senator Max Cleland (D-Ga.), in one of the most bitter races of that election cycle. With 9/11 still fresh, Chambliss ran an attack ad featuring a photo of Osama bin Laden that accused Cleland, a Vietnam veteran and triple amputee, of not having the “courage to lead” on national security. The ad worked; Chambliss won. But even Republicans thought the attack on Cleland’s patriotism was over the top: Chuck Hagel (R-Neb.) called it “beyond offensive.” This year, Democrats are looking to get their revenge by kicking Chambliss to the curb. And they think Jim Martin, a longtime state legislator and former candidate for lieutenant governor, is just the man to avenge Cleland.

Can Democrats really pick up a seat in deep-red Georgia? Until late September, it didn’t look possible. Chambliss led by a 17-point margin in a poll released on September 16. But as the economy worsened, Chambliss suddenly appeared vulnerable. Now most polls have Martin within a few points. Martin has yet to show a lead in a major non-partisan poll, but Nate Silver of fivethirtyeight.com thinks the polls are “lowballing” Martin and the race is closer than it seems:

The polls, from what I can tell, are showing a fairly high undecided vote among the African-American population. Rasmussen’s most recent poll, which had Saxby Chambliss up by two, shows that 12 percent of black voters are undecided in the senate race. Were those voters to split 4:1 to Jim Martin, that would be worth a net of around 2 points to him, making the race a tie. SurveyUSA, likewise, shows a higher rate of undecideds among black voters (7%) than among whites (3%).

Even if the Georgia Senate race didn’t have the Cleland backstory, Democrats would find it fascinating. Ever since they took control of the Senate in January 2007, Democrats have been frustrated by an unprecedented number of Republican filibusters.

If they can pick up at least nine seats in the Senate, the Democrats would have the 60 votes (including independents Bernie Sanders and Joe Lieberman) they need to break Republican filibusters. Winning the Georgia race looks increasingly crucial to that strategy. If the Democrats win the easy seats in Virginia, New Mexico, and Colorado, the closer races in Oregon, New Hampshire, Alaska, and North Carolina, and the squeaker in Minnesota, they’d still need one more seat to get to 60. The only remaining races within single digits are in Southern states: Mississippi, Kentucky, and Georgia. And many Democrats think Martin and the Georgia race are a good bet.

That Martin, who calls himself a “proud Democrat and a proud progressive,” might have a chance in deeply conservative Georgia might come as a shock. But in an interview with OpenLeft’s Matt Stoller, Martin said he thinks progressives can run and win in the South, because “people are fed up with where we are as a country, and they are looking for real change.”

Perhaps Martin’s most interesting position is his opposition to the $700 billion mortgage bailout bill. Martin says the bailout “failed to address the fundamental problems created by the deregulation of Wall Street. And it lacked consumer protections to stem the abusive lending practices that are at the root of this crisis.” Chambliss supported the bailout bill.

If Martin manages to pull out a victory in Georgia, not only will the Democrats be closer to thwarting GOP filibusters; progressive Democrats will have a new advocate in Washington. (That is, a reader points out, if Martin manages to get more than 50 percent of the vote on election day. Otherwise, a runoff will be scheduled for December).