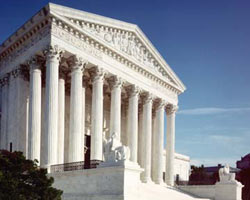 The Supreme Court kicks off its new term on Monday, smack in the middle of a hotly contested presidential election in which the court itself is not just a campaign issue, but the subject of TV attack ads against both candidates for the first time anyone can remember. Perhaps in a sign that the justices have a sense of humor, they’ve scheduled oral arguments in FCC v. Fox Television for Election Day—a case that’s all about the F-word. That case, you may recall, got its start during the live broadcasts of the 2002 and 2003 Billboard Music Awards, when Cher and Nicole Richie landed the network in hot water for a few fleeting expletives. (Richie: “Have you ever tried to get cow shit out of a Prada purse? It’s not so fucking simple.” And the always entertaining Cher, who, upon receiving her “artistic achievement award,” said of her many critics, “So fuck ’em. I still have a job and they don’t.”)

As the FCC squares off against Fox, whose lawyer launched his argument in the lower court with his own string of profanity, oral arguments promise to be entertaining. The FCC is hoping the high court will restore some of its power to regulate the F-word during prime-time TV. The rest of the cases in this term’s lineup are more consequential. None, however, is expected to land with the punch of Heller v. DC, the Second Amendment case from last term that undid 100 years of gun control law. Nonetheless, there’s plenty of substance to look forward to—or fear.

The tobacco company Altria/Philip Morris has two cases on the calendar. One, involving the limits of a state court’s power, is making its third appearance before the court from the state of Oregon, where the state’s highest court has essentially taken Cher’s attitude toward John Roberts and his brethren by refusing to overturn a multimillion dollar punitive damage award against the tobacco giant. The other involves lawsuits over whether the company’s marketing of light cigarettes constituted fraud that could be challenged in state court. The court will also hear an important case involving retaliation in employment litigation and another involving pregnancy discrimination, which court watchers have dubbed “Ledbetter II,” in reference to the case last year in which the court severely restricted womens’ ability to sue for pay discrimination. And the court will hear its third major case in the past year involving the arcane but important issue of federal preemption. In this case, the court will decide whether regulations issued by the Food and Drug Administration can prevent injured citizens from suing drug companies for damages in state court.

As it stands the court hasn’t taken on any major cases of the culture wars this term—no abortion cases or gay marriage challenges. But there is one free speech case that will be argued by a major culture warrior, Jay Sekulow. A veteran of religious freedom litigation, Sekulow represents the city of Pleasant Grove, Utah, which has been sued by a fringe religious group known as the Summum. The city denied the Summum the right to install a monument in a city park that outlines the group’s “Seven Aphorisms,” which it claims were inscribed by God on the first set of stone tablets given to Moses. The Ten Commandments are inscribed on another monument in this very park. The Summum argue that the city has violated their right to free speech by allowing one religious monument but not another, and a lower court sided with them. You’d think that Sekulow might be representing the Summum here, given his interest in religious free expression. He’s working for the city out of concern that a decision in favor of the Summum would require governments around the country to remove all existing religious monuments, fearing that they otherwise would have to grant the Aphorisms (or other unusual religious monuments) equal space.

One area of the Supreme Court docket that is significantly different from last term is environmental litigation. Last year, the court didn’t hear a single environmental case, but this term, there are four set for oral argument so far. Two of them will be argued on the first day of the term; lawyers jokingly refer to them as the “summer and winter cases.”

Winter v. Natural Resource Defense Council arose over the Navy’s use of sonar in training exercises off the coast of California in 2007. The NRDC sued the Navy to stop the exercises, alleging that the sonar use violated a host of environmental laws because it imperiled marine life, particularly the endangered beak whales. On its face the case is about environmental regulations, but at its heart, this is a serious challenge to the Bush administration’s assertion of executive power. That’s because after the NRDC won a preliminary injunction that halted the Navy’s unchecked use of sonar, the White House, through its Council on Environmental Quality, declared the injunction a national emergency and essentially told the Navy to ignore the court. The president then unilaterally exempted the Navy from having to comply with the relevant law, the Coastal Zone Management Act, arguing that protecting the whales would pose a threat to national security. The case will pose an interesting test for the new justices Roberts and Alito, who have shown a great deal of deference to the Bush administration.

In Summers v. Earth Island Institute, the environmental group sued to overturn Forest Service regulations that allowed the agency to log on public land without getting public comment or allowing for an appeals process. Former Clinton-era Solicitor General Seth Waxman said at a briefing last month that Summers may be the sleeper case of the term because its outcome could have a potentially big impact on the “regulated community,” i.e., big businesses. That’s because this case is what’s known as a facial challenge, which is a legal challenge filed to prevent harm or the loss of fundamental rights before any of those rights have actually been lost. Business groups and the Bush administration hate these type of cases (though presumably business groups will discover a new love for them if the Democrats take back the White House and the new administration starts issuing regulations they don’t like).

Waxman suggested that the case fits into one of the few trends so far discerned about the Roberts court. The court dismissed a facial challenge last term in a lawsuit over voting rights. That case was filed before any elections had actually taken place, so the plaintiffs couldn’t point to any single person who had lost his or her right to vote for lack of an ID, a point the court honed in on in its decision. But facial challenges are important to preserving rights that, once lost, can’t be recovered, such as the right to cast a ballot in an election. Should the court continue to rein in this type of litigation, it will seriously undermine the work of civil rights and environmental groups to act preemptively to protect natural resources and fundamental rights.

It’s unlikely that the court will hand down many decisions in these cases before the election. Nothing on the early argument calendar looks like an election turner, anyway. It’s too bad that the FCC case won’t be resolved by Election Day, when there will no doubt be plenty of people of one political persuasion or the other striving to keep themselves from uttering the F-word on TV.