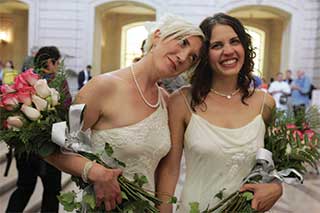 
In February 2004, San Francisco mayor Gavin Newsom began officiating same-sex weddings on the steps of City Hall. Over the next month, more than 4,000 couples tied the knot in defiance of a state referendum that had banned gay marriage in California in 2000. Newsom says he challenged the law out of a sense of “moral obligation.” But his move awakened a sense of moral outrage among Republicans, who raced to put anti-gay-marriage initiatives on the ballot in 11 states. After John Kerry lost in November, some Democrats suggested that the specter of gay marriage had thrown the contest to George W. Bush. “I believe it did energize a very conservative vote,” Sen. Dianne Feinstein (D-Calif.) said immediately after the election. “It gave them a position to rally around. The whole issue has just been too much, too fast, too soon.”

Now that the California Supreme Court has legalized gay marriage, should Barack Obama brace for another round of backlash at the ballot box? Bill Whalen, a Republican media consultant and a research fellow at Stanford’s Hoover Institution, describes gay marriage as a “gift” to John McCain. The California ruling is “going to make people mad,” says Carrie Gordon Earll, a policy analyst for Focus on the Family. Both predict that Christian conservatives in California, Florida, and Arizona will flock to the polls to back constitutional amendments that ban gay marriage. They also expect voters in other states to think twice about voting for an Illinois senator who supports the California ruling and says he wants to repeal the federal Defense of Marriage Act, which would open the door for married gay couples to sue for legal recognition in any state.

However, for many Americans, gay marriage may not seem as frightening as it did four short years ago. “You have a country that is evolving pretty quickly on these issues,” argues Chris Lehane, former communications director for the Kerry campaign. It’s not just the popularity of shows like Queer Eye for the Straight Guy. Anti-discrimination laws have afforded gays a new degree of safety and visibility in the workplace and acclimated more straights to the idea of same-sex relationships. While 63 percent of Americans opposed legalizing gay marriage four years ago, recently 63 percent told USA Today that same-sex marriage should be “strictly a private decision.”

To be sure, the gop strategy isn’t about reversing trends, but mobilizing the base. Unlike Bush in 2004, McCain could have a hard time prodding social conservatives to the polls, and gay marriage just might help. John Stemberger, an attorney who’s the lead backer of the Florida ban, says conservatives in the swing state “feel like there is something they can really get behind.” Yet it’s unclear that this will translate into votes for McCain. This month, 55 percent of Florida voters said they supported the ban; only 46 percent said they’d vote for McCain. Pastor Roland Comellas of the New Testament Worship Center in Tampa supports the measure, “but we’re more concerned about the economy,” he says. Last year, Florida’s moderate Republican governor, Charlie Crist, moved to yank his state party’s funding for the measure and proclaimed himself “a live-and-let-live kind of guy.”

The tacit support for gays by prominent Republicans such as Crist and California governor Arnold Schwarzenegger plus the recent defeat of anti-gay-marriage amendments in Iowa and Indiana suggest that opposition to gay marriage may no longer be a slam dunk for the gop. “McCain has gone to such pains to try to distance himself from Bush and to make clear that he represents a different kind of politics that he’s ultimately going to be forced to address this,” Lehane says. “Either he waffles on it, which just irritates everyone; he takes the conservative position, which undermines his brand; or he takes a more open-minded, progressive view of the world, and he really hurts his base. What worked great in 2004 doesn’t work so well in 2008.”

Both McCain and Obama have said that marriage should be “between a man and a woman” and that the states should decide the issue for themselves. But McCain voted for the 1996 Defense of Marriage Act, and in 2006 he campaigned for an unsuccessful gay marriage ban in Arizona. He also says he supports the California anti-gay-marriage initiative. According to Focus on the Family’s Earll, McCain’s record will resonate in the 27 states whose constitutional bans could be overturned by Obama-appointed “activist judges.”

But even if a Democratic Congress repealed the Defense of Marriage Act, the review of state laws would still fall to the Supreme Court. As a result, some conservatives say they no longer see the spread of gay marriage as the imminent threat they did in 2004. “I think Virginians feel very confident about our situation for the most part,” says Victoria Cobb, president of the Family Foundation of Virginia, which pushed through a gay marriage ban in 2006, “and so we are more focused on other issues.” In other words, recent victories in rolling back gay marriage may make it less of an issue in 2008.

Still, opinions of gay marriage are volatile. Throughout the summer the California gay marriage ban had trailed in the polls, only to leap ahead by 10 points early this month after attack ads painted the legalization of gay marriage as dictatorial and intrusive. The most striking flip was among young voters. Typically stalwart supporters of gay marriage, they now favor banning it by a 14-point margin, according to the poll, which was conducted by SurveyUSA on October 6th and has a 4 percent margin of error.

Yet young voters are notoriously difficult to poll, making the larger trend more instructive: in 1996 support for gay marriage among the under-30 set stood at 42 percent, in 2004 at 46 percent, and in May of this year at 52 percent, according to the Pew Forum on Religion and Public Life. In the long run, “the issue breaks along generational lines,” notes Whalen. Take for example Pete Knight, the Republican state senator who wrote California’s gay marriage ban. His son, David, married his partner in San Francisco in 2004. This year, Whalen says, Obama might bring out enough young voters to uphold gay marriage in California. (Obama is expected to beat McCain in the state by a double-digit margin.)

Plus, it’s not even a sure thing that gay marriage sank the Dems in 2004. Kerry pollster Mark Mellman has found that anti-gay-marriage ballot initiatives didn’t boost voter turnout for either party. Moreover, political scientists at mit found that Bush’s share of the 2004 vote increased in most battleground states, but not the three that had gay marriage bans on the ballot. Stephen Ansolabehere, one of the study’s authors, concludes that the gay marriage referenda may have given Kerry a bump. “That suggests there might even be some sort of backlash against this kind of politics,” he notes.

During last month’s vice presidential debate, the GOP took a less confrontational tack. Sarah Palin cited no differences from Joe Biden gay rights and even sought to temper her opposition to gay marriage with a shout out to her “very dear friends who do not agree with me on this issue.” The GOP’s more conciliatory approach indicates that gay marriage might soon play very differently. “Five years from now, ten years from now,” predicts Lehane, “you are going to have a bunch of people trying to explain their hypocrisy on this.”

For the time being, however, mayor Newsom’s more aggressive support for gay marriage remains ahead of its time—if not in substance, than at least in style. After the California Supreme Court upheld gay marriage this year, the exultant mayor and soon-to-be gubernatorial candidate mocked his adversaries in speech on the steps of city hall. Later edited and re-broadcast by gay marriage foes as a highly effective attack ad, his words will prove famously prescient or famously premature: “It’s inevitable, this door’s wide open now, it’s gonna happen, whether you like it or not,” Newsom said of gay marriage. “This is the future, and it’s now.”

Editor’s note: An earlier version of this story ran in the September/October 2008 issue of Mother Jones.