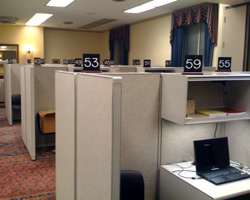 In Capitol Hill official-speak, it’s called the “transitional suite.” In reality, the harshly lit warren of numbered cubicles in the bowels of the Rayburn House Office Building is the private purgatory of members of Congress who are no longer needed.

Mere weeks after losing power, defeated or retiring US representatives move to this temporary basement setup from the comfortable office suites where they previously worked. Here they pass their final days in office, each soon-to-be ex-legislator and his or her staff issued a single work space measuring approximately 5’x5′. The cramped cubicle accommodates little more than a tiny desk, a laptop, a phone, and a box of Kleenex.

Bob Beauprez, a former two-term Republican congressman from Colorado who left office in 2006 to pursue an unsuccessful run for governor, recalls his own transition from elected office. “Anybody who’s been through [this] who doesn’t look in the mirror and wonder if anybody cares anymore…” he says, trailing off. “You go through a little bit of withdrawal. I was significant yesterday—today I’m not.”

In the weeks prior to December 1, when departing members of the House must vacate their offices for the transitional suite, the mood in B-339 Rayburn is decidedly more upbeat. During this period, it serves as the temporary quarters for newly elected House members, who are quickly swept up by a whirlwind of activity that includes orientation sessions and postelection parties and mixers. “When you’re part of the arriving class, it’s a beehive of activity,” says David Williams, the chief of staff to Rep. Steve Kagen (D-Wisc.), who has escorted both arriving and departing members through the transition process. “It’s Grand Central Station at rush hour. When you’re there with the departing members, it’s Grand Central on Christmas Day. It’s empty. In fact, it’s pretty morose.”

On a recent afternoon, Helene Flanagan, a Hill staffer who has helped to coordinate congressional transitions for 27 years, took me on a brief tour through the 3,900-square-foot basement suite, then in the process of being set up for the roughly 50 new members expected in the House. She described both the mechanics and mood of the changeover. “I always say the freshmen members of Congress are like freshmen in college,” Flanagan told me, standing among a bank of cubicles. “They’re wide-eyed and happy to be here.” On arriving, she says, it’s straight down to business as new members of Congress are bombarded with information, ranging from ethics tutorials to staffing options. “It’s like taking a fire hose to the poor souls, because we provide them with so much information. We get a lot of deer-in-the-headlight looks.”

After Thanksgiving, the new members of Congress are moved into their permanent offices, which are assigned through a lottery process. “Oftentimes, they are surprised how small the office space is,” says Flanagan, adding that it can come as a particular shock to those who held high-flying jobs prior to entering public service. After moving in, members meet with an architect to design the layout of their offices. If the office is due for new carpeting or drapes, the members-elect can choose replacements from an array of swatches. But when it comes to carpeting, there is one firm rule, Flanagan says: One color per office suite. “To save them from bad taste,” she explains.

It isn’t all work for the freshmen, who are inundated with invites to parties and luncheons held by fellow lawmakers, special interest groups, and lobbyists. It’s a little-known fact that the strict rules [PDF] on gift giving and lobbying that apply to sitting members do not cover members-elect. During an orientation session on congressional ethics in 2006, a Hill staffer who managed the transition for a newly elected Democrat recalls the trainer joked to the freshmen members, “Now is the time to get any expensive gifts out of the way.” The staffer provided a schedule of the orientation period, during which his boss was invited to eight receptions and four meals in the span of five days. “I took home a bottle of wine, a white chocolate Capitol Dome filled with chocolate nougat, and a tote bag,” the staffer says. The new lawmaker got the wine plus a fruit basket.

For departing members, these transitional weeks are less glamorous. While their replacements are rubbing elbows with the party leadership, the departees are offered resume writing and retirement planning seminars—even therapy sessions, if needed. Overnight these members go from dealing with issues of national import to attending to administrative minutiae. Among other things, they must ensure that all the equipment in their office, which technically belongs to the citizens of their districts, is accounted for. If so much as a laptop is missing, the member is held personally liable. “If they don’t pay, we take it out of their paycheck,” says Flanagan. An archivist is on hand if they wish to submit their papers to a library or university. (It’s up to them to handle any last-minute shredding.)

For Beauprez, who served on the powerful Ways and Means committee, through which many of the House’s most important bills pass, the postelection period came as a shock. “You go from being in the middle of the nation’s business to suddenly the phone doesn’t ring,” he says. “There’s no mail that goes through. There’s nobody to respond to.” Of his final weeks as a congressman, Beauprez recalls, “We had about two weeks of wrapping-up work after the election. That’s the most awkward part, when you know you’re not coming back but you’ve still got an obligation to finish the job you were elected to do. You’re just kind of sweeping out the corners of the room.”