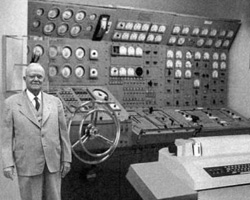 With the GOP in tatters after heavy electoral losses, there is a lot of grumbling going on inside Republican circles. The criticisms are many and, at times, contradictory: The party has grown too tight with the social conservative base and must moderate to have broader appeal; it has lost touch with its conservative roots; it is clueless about the needs of working men and women.

Amid all the griping, a handful of tech-savvy Republicans are saying that the real problem isn’t principle or politics; it’s hardware. The GOP, they complain, is a complete dud when it comes to the Internet and using the tools of a 21st-century campaign. These activists, generally younger than party leadership, are peeved that Barack Obama leveraged the Internet for unprecedented organizing and fundraising success while the Republican Party did nothing to keep pace. Within the Republican National Committee, says Michael Turk, a GOP Web strategist, “There is a view of the Internet as the ‘other.'” Turk left his post as the RNC’s eCampaign Director in 2005 out of frustration with the GOP’s inability to adapt. “I feel like I’ve been having the same arguments for 15 years,” he says.

A frustrated Turk cites what he calls a “perfect example” of the GOP’s institutional misunderstanding of how the Web works. When he was at the RNC, he helped start a series of Web videos called “Mindy and Katie Off the Record.” It featured two young female staffers chatting informally with prominent Republican figures about musical tastes, personal stories, and so on. Every time a new episode came out, the RNC would notify its email list. “We were getting better open rates”—that is, more recipients were opening the emails—”than stuff we were sending from the president,” says Turk. “They were hugely successfully. But they were hugely successful online, which meant they weren’t hugely successful in the ‘real world,’ according to some people” at the RNC.

One day, ABC’s online political bulletin The Note wrote a post called “What Do Mindy and Katie Think of Iran’s Nuclear Capability?” It teased Mindy and Katie for their softball questions. Turk was summoned to explain to top staff why he had put the RNC in a position to be mocked by the media. Turk argued that the media coverage was a positive. As Turk puts it, people were finally starting to say, “Wow, these guys are doing something we haven’t seen before, especially out of the RNC.” The brass didn’t buy it. They decided to go with a revamped scripted format that used a former TV anchor delivering something resembling an all-GOP newscast.

Turk told RNC officials they were “completely missing the medium.” He was quickly proven right. The new format lasted just a few shows. “They were abject failures,” says Turk. “Nobody watched them. Nobody passed them around. There was no interest in them at all. It became very much a propaganda sort of film.”

Turk left the RNC because of episodes like this. Today, he is working with a coalition of Web-oriented Republican activists that has started an initiative called Rebuild the Party. The group’s overarching goal is to change the GOP’s endemic Ludditism. Its website lays out a platform calling for the GOP to fully utilize the new technological tools that have vastly improved the arts of political organizing, fundraising, and campaigning. “Winning the technology war with the Democrats must be the RNC’s No. 1 priority in the next four years,” the group says. “The Republican Party can no longer survive in a modern era if we resist this new reality.”

Why is the GOP on the losing side of a technology gap? There is one obvious reason: Losers need innovation more than winners. “We are a victim of our success,” says Matt Lewis, a blogger for the conservative website TownHall.com and a member of the Rebuild the Party coalition. “When you’re winning elections, you don’t start looking around for innovative, transformative ideas. You stick to what works. And up until 2006, the Republican Party had been rewarded for sticking to what works. But the liberals who had been defeated many times were searching for something new, and they found it.”

It was a long search, stretching from MoveOn.org to Howard Dean’s presidential campaign and finally to the Obama Web team. Lewis is hoping GOP leaders, duly humbled by their party’s showing in the last election, will realize they have no choice but to initiate a similar process. “Sometimes,” he says, “you have to hit rock bottom.”

And after hitting rock bottom, sometimes there is a bounce. Scott Graves, editor in chief of the conservative blog Red County and a Rebuild the Party member, notes that conservative Internet activists mobilized quickly after the Republican defeat. “There were probably two dozen very legitimate, well-respected sites and initiatives that cropped up overnight [after the election],” he says, adding, “I think it is time for Republicans to experience a period of wandering the wilderness and rediscovering what they stand for. And then, after they figure that out, identifying who can communicate it.” He says the old, Internet-free way of doing business in the GOP won’t cut it any longer. “All these lions of the conservative movement getting together for a meeting or a conference call, that’s not a winning strategy. That’s just not how it’s going to work anymore.”

Change within the Republican Party’s national apparatus may not come easy. “The GOP tends to look at things like infrastructure in two-year spurts,” says Turk, who was the Bush/Cheney eCampaign Director in 2004 before taking the top Internet post at the RNC. “After ’04, I went to the RNC to take what we had built for the [Bush reelection] campaign and make that a permanent architecture, to bring the whole concept of social networks and online activism over to the RNC. I fought that battle for a little over a year, and it got to the point where it just wasn’t getting through.”

The RNC’s leaders haven’t run off to a dark room to hide under the covers. “We are fully committed to using new media and the Internet to interact with Americans on substantive issues,” says Cyrus Krohn, the RNC’s current eCampaign Director. Recently, the RNC launched a Web initiative called Republican for a Reason, which allows rank-and-file Republicans from around the country to submit text or video messages explaining why they belong to the party and “what [they] would like to see the party focus on and address in the coming weeks and months.”

Turk calls Republican for a Reason a “token measure” that is a “way for them to say they’re being interactive when they’re really not.” The site allows users to discuss issues with each other if they sign up for an account, but there is no mechanism for communicating with party leadership. “This is exactly the problem a lot of us have with the GOP. It’s all very one-way,” Turk says. “It provides the illusion of being two-way, in the sense, ‘Hey we’re going to give you the ability to submit a message to us.’ But that’s it. ‘We’re not going to give you any ability to continue the conversation. You’ve said your piece, we can say we’ve listened, and now you’ll go about your business.'”

The Rebuild the Party activists recognize that if the Republican Party goes about its business, disappointing election days like November 4 will become a regular occurrence, and the GOP will drive itself into a permanent technophobic minority.

Correction: This story originally claimed that the Republican for a Reason website does not include a discussion function. The function does exist. Users must sign up for an account in order to access it.