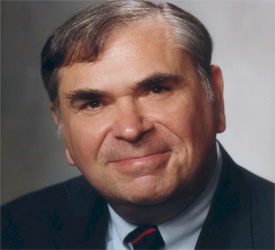 On a mid-September evening in northern Virginia, a group of true believers gathered in a spare meeting room at the Hyatt Arlington to celebrate the 221st anniversary of the signing of the US Constitution. This special event, sponsored by the political advocacy group the Conservative Caucus, drew some 40 or so people to gather at the feet of Caucus Chairman Howard Phillips, one of the grand architects of the religious right. Among the presenters were Thomas DiLorenzo, who offered a repudiation of Alexander Hamilton, and M. Stanton Evans, who delivered a paean to the late Sen. Joseph McCarthy. The evening’s highlight was the presentation of the Conservative Caucus’ Andrew Jackson Champion of Liberty Award to Cliff Kincaid, the longtime purveyor of a theme that would be picked up by the McCain camp in the final weeks of the campaign—that of Obama as spawn of a socialist, even communist, milieu.

Far from the ad makers and messaging experts, the personal shoppers, makeup artists, and campaign planes, here was the ill-funded alternate universe of the earnestly paranoid, led by a man who, through sheer force of personality, helped inspire a viral effort to plant doubts about the Democratic presidential nominee.

As the 2008 presidential campaign draws to a close, much of the swirl of insinuations about Obama traces back to Phillips and the ideology he represents, an admixture of ferocious anti-communism, vehement anti-feminism, and politicized Christian chauvinism. As a key player in a string of right-wing organizations, Phillips sits at the nexus of an alliance of activists who, beginning in primary season, advanced a fear-based case against Democratic candidate Barack Obama that would be disseminated throughout right-wing media, and eventually make its way, in a softened form, into the rhetoric of John McCain and Sarah Palin. And that rhetoric, about whether Obama shares America’s values, or has plans for the redistribution of wealth, has embarrassed the party’s moderates, some to the point of repudiating McCain.

She may not know it, but Palin herself owes a career debt to the Phillips worldview. Her first campaign for mayor of Wasilla was reportedly pushed by Mark Chryson, then chairman of the Alaska affiliate of Phillips’ Constitution Party, and his associate Steve Stoll, an activist for the anti-communist John Birch Society with whose president, John F. McManus, Phillips often collaborates.

Another of Phillips’ close associates is Jerome Corsi, author of The Obama Nation: Leftist Politics and the Cult of Personality, which portrays Obama as a closet socialist, and of course Unfit for Command: Swift Boat Veterans Speak Out Against John Kerry, cowritten with John E. O’Neill, which became a New York Times best-seller. Phillips is in frequent contact with Corsi, who, late last year, abandoned a bid for the Constitution Party’s presidential nomination in order to devote himself to promoting another of his books, this one about immigration, The Late Great USA: The Coming Merger With Mexico and Canada.

Cliff Kincaid, whom Phillips called “a good friend,” told the Conservative Caucus gathering that he supplied much of the research for Corsi’s Obama book, as well as for David Freddoso’s The Case Against Barack Obama. Kincaid leads America’s Survival, Inc., and is a longtime writer and editor for Accuracy in Media, both right-wing media outfits funded by foundations controlled by right-wing financier Richard Mellon Scaife.

The story told by Phillips’ followers is familiar by now: that Obama, who may not have been born in America, was mentored by socialists and communists, and pals around with domestic terrorists. As backlash to the Palin pick grew and McCain flubbed his handling of the financial crisis at that critical moment in September, the desperate candidate seemed only too happy to run with parts of the poison package handed him by Corsi and Kincaid.

Palin and McCain have built on the right’s theme, calling Obama a socialist for advocating a more progressive tax system. Meanwhile, the idea that Obama is foreign born is advanced on blogs like The Corner at the National Review‘s website and Atlas Shrugs, as well as on Internet news sites such as WorldNetDaily and Newsmax. The foremost purveyor of the alleged Obama birth-certificate mystery is Corsi, who, Phillips said when he spoke to me on Monday, “is in Hawaii right now, doing his best to check out the natural-born-citizenship status of Barack Obama.” (The nonpartisan group FactCheck.org has vouched for the validity of Obama’s Hawaii birth certificate, which its researchers said they have seen and touched.)

But Phillips has his sights set on more than defeating Obama; he’d like to blow up the Republican Party as well. For more than a decade, Phillips has been hard at work building the infrastructure of the Constitution Party, which he believes could pick up the most socially right-leaning fragments of the GOP in the event of an intraparty split. If Barack Obama wins the presidency, Phillips believes, this could be that moment.

More than a decade ago, Phillips explained to me that he well understood that the US electoral system favors the two-party setup; the question, he said, is which two parties. He also predicted a financial crisis—which he then saw as imminent—that would “terminally undermine confidence in whomever controls the presidency when it hits and, to a lesser extent, in the other party, as well,” he said. “The whole purpose” of his party’s presidential bid, he said, “is to position for that crisis and to be able to pick up the pieces when it’s over.” And indeed, speculation today is rife over a potential crack-up of the Republican Party, especially after the

<p>Adding to the strife is the selection of Palin as McCain’s running mate. Even as the pick elated the party’s right wing, it has served to alienate the likes of Colin Powell, former Reagan administration official <a href=”http://www.huffingtonpost.com/2008/10/20/neocon-iraq-war-promoter_n_136337.html” target=” _blank”>Ken Adelman, and Charles Fried, the former Reagan administration solicitor general, all of whom have endorsed Barack Obama, along with a string of elite conservative columnists.

For Phillips’ purposes, that makes Palin this year’s perfect pick. In the constellation of organizations Phillips either founded or cofounded, the most powerful by far is the Council for National Policy, an umbrella group of right-wing activists currently led, according to Phillips, by Becky Norton Dunlop, vice president for external relations for the Heritage Foundation. The CNP meets in secret closed-door sessions, most recently in St. Paul the weekend prior to the Republican National Convention. He told me that when news of the Palin pick came, the room erupted.

“They were hugging each other, they were screaming, they were so happy,” Phillips said of the CNP members, who hail from the leadership of nearly every right-wing organization, religious and secular. “And I can understand why,” he said, citing her comments upon the birth of her youngest child, Trig, who has Down syndrome. According to the Anchorage Daily News, “Palin said she was sad at first but they now feel blessed that God chose them.”

Phillips does carry a bit of a torch for Palin, hoping she herself might someday abandon the GOP: “She is a person who has won the hearts of grassroots conservatives, and she might be the kind of person who would consider another course of action.” That other course of action, in his view, would be to leave the Republican Party and run on the ticket of his Constitution Party, of which the secessionist Alaskan Independence Party is the state affiliate. Though Palin never belonged to the AIP, her husband, Todd, did register as a member for seven years, dropping the affiliation during his wife’s unsuccessful 2002 run for lieutenant governor. Then, just a few months ago, the governor herself delivered a video greeting to the party’s statewide convention, telling the assembled to “keep up the good work.”

“If conservatives were smart, they would ditch [the Republican Party] and start over,” Phillips told me in a phone interview this week from his Virginia office. “But it would take some visible leadership to do that, and you have a lot of people who see themselves as the Republican nominee four years hence who feel they’ve got an investment in the GOP.”

As for himself, Phillips says, he’ll stick with the outside game—even though it’s left him, at 67, with little money, while his former White House colleagues (Phillips famously led a “defund the left” campaign from the Office of Economic Opportunity, which he headed during the Nixon administration) went on to successful corporate careers. Just two weeks ago, Phillips gathered with other former OEO colleagues at Vice President Dick Cheney’s official residence, several multimillionaires—including Cheney and former Defense Secretary Donald Rumsfeld—among them.

Yet Phillips holds out hope he may yet have the last laugh. In the event of a schism, he reasons, the faction of the GOP likely to fall to the Constitution Party is the faction with the ground operation—the evangelical churches and faith-based organizations that run the get-out-the-vote operation created through the organizing infrastructure created by Phillips and Richard Viguerie more than 30 years ago. But the establishment faction has its own assets. “They don’t have the ground game, but they do control the party’s money. The concentrated power in the party establishment. The question is, will people who have grassroots support consider a different strategy? Will the James Dobsons of the world consider starting fresh outside the GOP?”

Phillips said he’s not optimistic that they will, though he does note that “the natives are restless” on the right. This presidential election, his Constitution Party will appear on the ballot in 38 states. The ticket has been endorsed by Ron Paul, the libertarian whose candidacy set online fundraising records but ultimately failed to draw votes in the Republican primary. Paul—and Obama, for that matter—also points the way to a new organizing paradigm for Phillips, who like Obama is well schooled in grassroots activism. (In the early days of the Conservative Caucus, which he launched in the 1970s, Phillips drove to each of the 435 congressional districts to recruit candidates and volunteers.) He’s an astute student of the left; he’s always quick to remind me that he subscribes to Mother Jones, and just about every other major progressive publication. The strategies he employed to build his movement were borrowed, he told Sidney Blumenthal in 1980, from Saul Alinsky, the community organizer whom Sarah Palin decries as the source of Barack Obama’s socialist ideology.

If Phillips can set the wedge firmly enough in Republican constituencies, and help to damage a victorious Obama with the Corsi-Kincaid narrative, he’s convinced that the Constitution Party could cause the GOP some headaches in 2012. “We have a lot of work to do,” Phillips told me. “In many ways, the very likely Obama landslide is going to make it easy for us. And we’re going to do our best to take advantage.”