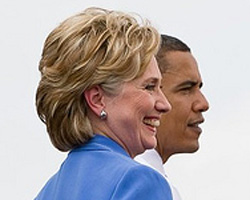 I was agnostic on the matter of Hillary Clinton’s possible appointment as secretary of state–until last night.

If Barack Obama, the president-elect, wanted to pull a Team of Rivals play, that had seemed fine to me. And placing Clinton in Foggy Bottom would remove her from the dicey business of passing health care reform. Would it unite the party? Well, judging from the election results, the party is pretty darn united already. Despite the griping of a few Hillaryites at the Democratic convention, her voters certainly swung behind Obama in the general election (see Pennsylvania), after HRC and WJC campaigned for BHO in the fall. Unless an explicit deal was made between Obama and Hillary Clinton, it did not seem that Obama, after bypassing her for veep, had to appoint her anything for the party’s sake. Still, if Obama and his savvy band of advisers thought that handing her one of the best jobs in the Cabinet would generate political benefits they could use to advance their agenda, I, as a non-fan of Hillary Clinton, was willing to say, okay–for what that was worth.

But then this happened: the presidential transition of no-drama Obama became infected by the never-ending soap opera of the Clintons. And it really is time to turn that program off. There are plenty of policy and political reasons for a progressive not to fancy Hillary. She served on the Wal-Mart board when the mega-firm was fighting unions; she screwed up health care reform for almost a generation; she voted wrong on the Iraq war and then refused to acknowledge she had erred. But, worst of all, as the cliché goes, with the Clintons, it always does seem to be about the Clintons.

So we’ve had a week of will-she-or-won’t-she and what-about-him. Couldn’t this have been handled with a little more grace? Maybe not, since it involves the Clintons.

I don’t know how the Obama camp approached the issue. But before Obama met last week with Hillary to talk about this, his team should have done a pre-vetting of Bill. And then Obama, at this meeting, ought to have said something like this to her:

If you might be interested in the State position, there are a few issues that would come up concerning Bill. Let me run through a few. Would he be willing to release the names of his foundation’s donors, as well as those who contribute to his presidential library? Would he be willing to forego contributions and speaking fees from foreign governments, foreign heads of states, and major foreign companies that would have an interest in US foreign policy decisions? Would he be willing to discuss with my national security adviser his foreign travel plans and his foundation’s projects before they are announced and undertaken–and would he be willing to defer to us if we believe they are not appropriate or helpful at the time? I know that these are big things to ask. But given his global activity and standing, there’s not much choice. And if it’s a deal-breaker, I certainly would understand. But before you and I go down this road, we should make sure there are no major obstacles. Can you talk to him and get back to me in a day or two? And, to be helpful, Rahm has come up with a list….

Hillary’s answer would have to have been either (a) of course, or (b) thank you for considering me, but I don’t believe this would be a good fit. Two days would pass, and then the drama–or at least this part of it–could be over.

Today the news is that Bill will do what he can. AP is reporting:

Clinton has agreed to release the names of several major donors to his charitable foundation and will submit future foundation activities and paid speeches to a strict ethics review, said Democrats knowledgeable about the discussions.

They also said that Clinton would step away from day-to-day responsibility for his foundation while his wife serves and would alert the State Department to his speaking schedule and any new sources of income.

Does that take care of it? Note the use of the word “several.” It’s hard not to see some sticking points arising about what is disclosed and when. The negotiations between the Obama camp and the Clinton team are supposedly proceeding smoothly. But why should there be negotiations? And could it end up with news reports saying Bill Clinton is willing to reveal X, but the Obama side wants him to release X plus Y? That is, more drama. According to AP, “One Clinton adviser noted that former President George H.W. Bush has given paid speeches and participated in international business ventures since his son, George W. Bush, has been president–without stirring public complaints or controversy about a possible conflict of interest.” This does raise the suspicion that the Clintonites might not agree to all the necessary limitations. And don’t they–or at least, this aide–understand there’s something of a difference between their case and that of the Bushes (though it was probably not appropriate for Daddy Bush to engage in that activity).

Bottom-line: if HRC came fuss-free, then maybe there’d be no reason to kick up a fuss about her appointment. Yet that doesn’t seem to be what’s happening.

But there’s another issue to consider, one that has been overshadowed by the drama: if she runs the State Department in a fashion similar to how she managed her campaign, then the country will be in trouble. Her spinners went beyond the boundaries of fair and reasonable spinning. Her team was a snake pit of competitive aides. She did not master the art of refereeing internal disputes. She signed off on strategic blunders. Hers was not a steady hand.

Perhaps that’s the better argument against her. Being secretary of state isn’t just about giving speeches and touring the world as a celebrity, it’s about managing (and now reviving) the creaky and beleaguered foreign policy apparatus of the United States. And Clinton’s résumé is not strong on that front.

(Photo of Clinton and Obama by flickr user sskennel used under a Creative Commons license.)