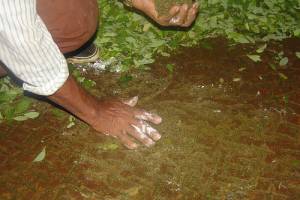 There’s a new tactic to target casual drug users: Convince them drugs are polluting the planet. On Tuesday, according to the Guardian, Francisco Santos Calderón, the vice-president of Colombia, told a conference of British senior police officers:

If you snort a gram of cocaine, you are destroying 4m square of rainforest and that rainforest is not just Colombian—it belongs to all of us who live on this planet, so we should all be worried about it. Not only that, the money that you use to buy the cocaine goes into the hands of FARC, of illegal groups that plant mines, that kidnap, that kill, that use terrorism to protect their business.

As the Guardian explained, Santos wanted to persuade casual British users, the “social user who drove a hybrid car and was concerned about the environment” to eschew the drug because of its environmental impact. As Gawker asked sardonically, “You might not stop for the sake of your money, your police record, or your septum, but would you give up blow if you knew that every eight ball cost ten square meters of precious rainforest habitat, you Whole Foods junkie?”

While Santos didn’t cite any evidence to prove his point (or his 4m square statistic), what he is saying sort of makes sense. The coca plant is a cash crop and Columbia is a tropical country; growing cocaine—like oranges, mandarins, or coffee—obliges farmers to cut down some of the rainforest. Still, something about this seems a little suspicious. Are casual users of cocaine really responsible for pervasive environmental destruction?

While it’s true that in the last five years, production of cocaine in Bolivia, Colombia, and Peru has increased almost 20 percent, the truth is that the destruction of the rainforest is not due to increased demand from wealthy British cocaine users. In fact, it makes more sense to wonder if inept efforts to eradicate the coca plant don’t cause most of the destruction of the rainforest. Farmers grow coca because it’s a lucrative cash crop; then drug control agents spray the plants with poison. As Mother Jones explained back in March 2007, this causes farmers to, sensibly, push further into the rainforest.

So yes, it is technically true that the cocaine industry is destroying the Columbian rainforest. But while casual drug use certainly doesn’t help, it’s not the main cause of environmental destruction; that award goes to Plan Columbia (.pdf). It looks like Santos can’t see the rainforest for the coke.