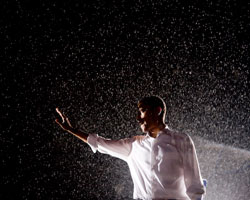 The Department of Homeland Security and Department of Agriculture have no plan to work together in the event of a food-borne disease outbreak or terrorist attack. The Department of Defense’s security clearance process takes so long it jeopardizes classified information. The EPA’s chemical risk assessment program is improperly influenced by private industry.

When Sen. George Voinovich (R-Ohio) requested a report from the Government Accountability Office (GAO) listing questions his fellow senators might ask President-elect Barack Obama’s political nominees at their upcoming confirmation hearings, he probably didn’t expect a 150-page list of Bush administration screwups. But that’s what he got.

The GAO, the investigative arm of Congress that frequently exposes waste, incompetence, and corruption in the federal government, supplemented its proposed questions with summaries of problems in the executive branch. The result is a catalogue of hundreds of unresolved issues that the Bush administration is leaving behind for Obama and his administration.

The report, which is divided by department, is strictly limited to what the GAO calls “basic management capabilities,” which means it raises questions about personnel, resource distribution, IT, and “results-oriented decision making.” Problems like the politicization of the Justice Department are not mentioned. But this report serves as a peephole into the myriad internal problems of the executive branch, depicting a federal bureaucracy that is rife with mismanagement, inefficiency, and faulty communication practices—all of this combining to jeopardize both the nation’s health and security.

Department of Homeland Security
The section on DHS begins with the big picture: “The department lacks not only a comprehensive strategy with overall goals and a timeline, but also a dedicated management integration team to support its management integration efforts.” In other words, the agency that’s supposed to protect American citizens is really screwed up—spinning wheels and wasting money.

But problems exist at the granular level, too. The department has largely failed to define the Transportation Security Agency‘s role in securing such vital (and vulnerable) infrastructure as rail systems, highways, and pipelines. DHS and FEMA have not clarified “how prepared they expect first responders to be.” Immigration paperwork is ending up in “long-standing backlogs.” A program costing hundreds of millions of dollars that aims to collect and share information on selected foreign nationals who enter and exit the United States “still does not have an operational exit tracking capability.” The Coast Guard suffers from a shortage of personnel and other resources, and the GAO reports that it is concerned it is “just reducing operations arbitrarily to meet budget constraints.”

Department of Defense
The Pentagon is singled out for fierce criticism in the GAO study. It is cited for a lack of strategic thinking in its “investment decision making” and for using “overly optimistic planning assumptions” that regularly leaves the agency lacking funds for its projects. It has done little to address long-standing weaknesses in its billion-dollar business operations that result in “substantial” waste and inefficiency.

The GAO is dubious that the DOD can rebuild its operational readiness, which has been badly hampered by the wars in Iraq and Afghanistan, and simultaneously pursue initiatives to modernize and reshape the armed forces. The department’s weapons systems acquisition program is in such disarray that the GAO has put it on its high-risk list.

Department of Agriculture
GAO investigators found that information technology security is so poor at the Department of Agriculture that its operations are “seriously” jeopardized. They also found that the federal farm programs the agency administers are handing out money to people who are not actively engaged in farming. Perhaps most distressing, the agency is not doing enough to secure “high-consequence biological pathogens” at laboratories carrying out agency-funded work. That means labs studying potential biological weapons agents are not handling these materials adequately and pose their own security risk.

Department of Veterans Affairs
The VA is portrayed in the report as mismanaged and out of date. Criticizing both the VA and the DOD for their inability to meet the health care needs of troops returning from Iraq and Afghanistan, the GAO says the VA has huge inventories of pending disability claims and takes far too long to process them. It knocks the department’s eligibility criteria for receiving benefits, and notes that its system for assessing the severity of disabilities is outmoded.

Environmental Protection Agency
The EPA lacks the air and water quality data needed “to evaluate the success of its policies and programs,” according to the GAO. The EPA’s chemical-risk-assessment process should be a scientific one, but instead, the report says, it’s influenced by industry groups, the Department of Defense, and others. The report notes that the EPA’s attempts to keep Americans safe from toxic chemicals are so subpar that a number of states have introduced their own legislation to fill the regulatory void. One particular problem is that the EPA rarely forces chemical manufacturers to provide data on the safety of their products, instead allowing companies to voluntarily supply information.

Department of Commerce
One division of Commerce is blasted in the report: the Census Bureau. In March 2008, the GAO placed the 2010 census project on its high-risk list, citing “long-standing weaknesses” in the Census Bureau’s IT department, problems with the handheld computers used to log census information, uncertainties over cost, and other potential problems. “There have been performance deficiencies and uncertain, escalating costs,” writes the GAO.

Department of Energy
The department is planning an $80 billion modernization of the nation’s nuclear weapons complex. But the modernization, including the construction of major new facilities, is being planned without “clear requirements from the Department of Defense about its weapons and stockpiling needs,” says the GAO. Consequently, the department may be building nuclear complexes that are potentially not needed or properly designed. The department’s nonproliferation efforts “need to be reviewed for relevance and effectiveness” and its contract management has been on the high-risk list since 1990 for “fraud, waste, abuse, and mismanagement.” Fixing all of these problems may be tough. According to the GAO, the department lacks staff with project management experience.

Department of Health and Human Services
Incoming HHS chief Tom Daschle has his work cut out for him: The department appears to have problems executing its core functions. According to the report, HHS efforts to boost preparedness for a public health emergency have been stymied by “shortages in the public health workforce” and “difficulties in intergovernmental coordination.” Due to “weaknesses in agency capacity and data,” the FDA has difficulty overseeing the safety and efficacy of medical products and it cannot effectively ensure food safety because of a lack of “strategic planning.”

Department of Transportation
The GAO offers an observation that to most Americans is a no-brainer: “Despite large increases in expenditures in real terms for transportation, the investment has not commensurately improved the performance of the nation’s surface transportation system as congestion continues to grow.” Translation? We’ve been spending tons of money and traffic is just as bad.

General Services Administration
The GSA, which provides support services for federal agencies, has a multibillion-dollar repair backlog and owns property that is not needed. The GAO notes that it has been harping since the late 1980s about the GSA’s leasing practices, which the GAO says has cost taxpayers hundreds of millions of dollars.