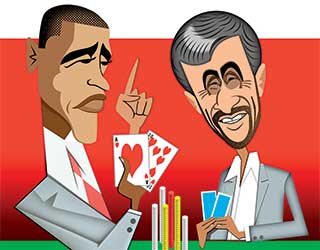 Flynt Leverett looks restless. Washington is preoccupied with the presidential transition, but Leverett’s mind is thousands of miles away, in the tangle of conflicts that embroil Iraq and Iran. Impishly intellectual, with a wisp of a beard, Leverett looks every bit like the Central Intelligence Agency analyst that he was for years before becoming the chief Middle East officer on President Bush’s National Security Council (nsc). Now a fierce Bush critic, Leverett is worried about how President Obama will pull off his promised withdrawal from Iraq.

Bringing the troops home might be the easy part, he suggests. The hard part? Making sure violence doesn’t erupt worse than before. And the key to that lies not in Baghdad or Washington, but Tehran. “In terms of day-to-day influence, Iran has more influence inside Iraq than any country, including the United States,” he says. “They’ve played a huge role in reducing violence levels there.”

Iran’s power is so extensive that there isn’t any fix for Iraq without a simultaneous deal with Iran. “It’s really hard to see how the United States can extricate itself from Iraq without some kind of understanding with Iran about what those arrangements might look like,” says Leverett. “There can’t be a settlement without an Iranian buy in.” The problem, of course, is that Iran has its own issues with Washington—and chances are good it would use Iraq as leverage to get what it wants, setting up perhaps the most dangerous dilemma for the Obama administration.

So far, especially since 2007, Iran has exercised restraint in Iraq, even using its influence among various Shiite parties to tamp down violence. Should it choose to take the lid off, the new president will face a brutal choice: forestall civil war by accepting a deal on Tehran’s terms, or send US troops back into Iraq and prepare for a military showdown with Iran.

Behind the scenes in Washington, these risks are being taken very seriously. “Iran’s leverage would be extraordinarily high,” says Chas Freeman, the portly, gray haired, and husky voiced former US ambassador to Saudi Arabia and one of Washington’s most informed observers on the Middle East. “If things in Iraq are going okay, and the Iranians have power to disrupt things and do, then Obama’s goose is cooked.”

Even worse, says a former State Department official, Tehran might push its luck too far—with catastrophic consequences. “Iran would have to be careful not to overplay its hand,” says this expert, who worked closely with the Iraq Study Group, the 2006 commission led by former Secretary of State James A. Baker III and former Indiana Rep. Lee Hamilton. “And if they overplay it, frankly, Obama would use the military instrument, and it won’t be a pinpoint attack. It will be a massive one.”

Already, there are signs that the relative calm in Iraq might be short-lived. Both General David Petraeus and the 2008 National Intelligence Estimate on Iraq have warned that a new explosion of violence could well reverse recent gains. An even blunter take comes from Wayne White, who until 2005 was one of the top Iraq watchers at the State Department’s Bureau of Intelligence and Research. “As president-elect, when Obama gets a look at the real intelligence reports, he’s going to be saying, ‘Oh shit, look how bad this is,'” he told me. “‘That stuff about the surge—it’s phony. It’s not sustainable. And if I leave Iraq and it blows up, it’ll be all my fault.'”

Via a crackling telephone connection to Amman, Jordan, I asked for an assessment from one of the central players in Iraq’s drama—Abu Azzam al-Tamimi, an accomplished businessman, tribal leader, and former insurgency leader who is now the commander of the US-allied Awakening movement in western Baghdad. His view was grim. Hundreds of the men under his command have been assassinated in recent months, he said, by death squads linked to Iran’s intelligence service or to the Iraqi ministry of the interior. In response, he predicted, many of his forces would go underground and join the resistance again. “Look around,” he said. “It’s already come back. It’s getting stronger. Look at what’s happening in Baghdad.”

If the Shiite-led government continues shutting out the minority Sunnis, agrees Freeman, things could get worse in a hurry. “It’s very explosive,” he says. “One missed step by the Shiite authorities and the insurgency resumes.” And that, according to Ali Allawi, who served as Iraq’s first minister of defense in the post-Saddam Hussein era, would set off a lethal response from the government. “The army will fire all of its Sunni officers, and they will attack without any of the qualms that the Americans have had,” he told me. “If there are attacks, say from Ghazaliya [in western Baghdad], they will just depopulate the area.”

The only way to defuse the insurgency over time, according to many of the experts I spoke with, is for Iraq’s government to strike a power-sharing deal with the Sunnis. And although Obama has proposed an international effort to facilitate such an accord, it’s increasingly clear that the United States has less leverage over the ruling Shiite religious parties than does Tehran.

Many of the Shiite exiles installed by the US invasion in 2003 lived for decades in Iran, where they built close ties to the religious establishment. The ruling Islamic Supreme Council of Iraq and its Badr Brigade militia were created by the Iranian Revolutionary Guard Corps and commanded by Iranians, and the council still receives much of its funding from Iran. Iran also has strong ties to Prime Minister Nouri al-Maliki, who lived in Tehran for part of his exile years, and to Moqtada al-Sadr, the rebel cleric whose 60,000-strong Mahdi Army is a potent force in Iraq’s civil strife. “When you tell the Americans about this, they don’t believe it,” Aiham Alsammarae, who served as Iraq’s minister of electricity from 2003 to 2005, told me. “They’ve created a monster.”

Iran also maintains a large network of covert agents and armed gangs inside Iraq. US military officials have started to uncover a paramilitary network called the Kata’ib Hezbollah, modeled on the Iranian-backed group in Lebanon, that they believe is getting support from Iran. Tehran, according to many sources, also supports death squads that have targeted former Baathists, military officers, and leaders of the Awakening movement. “If we were to attack Iran today,” says the ex-State Department official, who visits Iraq often, “we would lose thousands of people in Iraq. They could slit a thousand throats in one night.”

To deal with Iraq and Iran simultaneously, Obama will have to seek not one, but two grand bargains. Even in normal times, pulling off one would be exceedingly difficult. Doing two at once might be asking the impossible. Grand bargain No. 1 is the reordering of Iraq’s political system in a way that empowers forces that have so far been shut out of Iraq’s ruling coalition, including nationalist Sunnis, former Baathists, partisans of Sadr’s movement, and dissident Shiites unhappy with the Maliki regime. Such a deal would also have to blunt the Kurds’ expansionist aims and bring Sunnis, Shiites, and Kurds into a lasting accord—all of which would require Iran’s full support. Grand bargain No. 2 would be a comprehensive settlement of the US-Iran conflict, perhaps starting from a proposal Iranian officials reportedly made back in 2003: In exchange for a US promise to take regime change off the table and acknowledge Iran’s strategic interests in the region, they would end Iran’s support for terrorism, including Hamas and Hezbollah; work with the United States in Iraq and Afghanistan; and find a solution to the nuclear issue. The offer, which conservatives doubt was genuine, was dismissed out of hand by the administration. But Leverett and his wife, Hillary Mann Leverett (also a former nsc official), believe it could be the foundation of a comprehensive approach to Iran. “Too many people view Iran as incapable of calculating its own national interests,” says Mann Leverett.

To accomplish both of these grand bargains, Obama will need an enormous amount of international support, as well as consummate diplomatic skill and steely resolve. He’ll also need a near-improbable run of good luck. “The Iranians are sitting pretty,” concludes Joost Hiltermann, an Istanbul-based analyst with the International Crisis Group. “They have a lot of cards to play.”