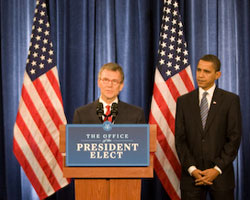 As the Senate Finance Committee reviewed Tom Daschle’s financial records on Monday, Daschle himself apologized for “the errors that required me to amend my tax returns.” But that apology didn’t turn out to be enough. On Tuesday, Daschle withdrew his name from consideration as the Obama administration’s Health and Human Services nominee.

Throughout all this, however, he offered no apologies for the riches he reaped quite legally by serving the interests of private health care companies.

There are plenty of things in Daschle’s financial history that should have alarmed the White House and his former Senate colleagues a lot more than a car and driver he forgot to report to the IRS. (Some of them are well documented by others here at Mother Jones.) But no one seemed much concerned about such matters–a fact that in itself reveals the inherent weaknesses in President Obama’s restrictions on former lobbyists serving in government.

Massachusetts Senator John Kerry was one of several leading Democrats who defended Daschle on the Sunday morning news shows. Kerry declared that Daschle’s tax issues were an “innocent mistake” that would not affect his ability to perform his job “one iota.”

Yes, it’s probably true that being driven around in a Cadillac and not paying taxes on it won’t compromise Daschle’s capabilities or independence as HHS secretary or “health czar.” The same cannot be said about all the income that Daschle did report to the IRS. As described by the New York Times:

As a politician, Mr. Daschle often struck a populist note, but his financial disclosure report shows that in the last two years, he received $2.1 million from a law firm, Alston & Bird; $2 million in consulting fees from a private equity firm run by a major Democratic fundraiser, Leo Hindery Jr. (which provided him with the car and driver); and at least $220,000 for speeches to health care, pharmaceutical and insurance companies. He also received nearly $100,000 from health-related companies affected by federal regulation.

Mr. Obama has instituted rules requiring former lobbyists in his administration to pledge not to deal with former clients…As a strategic adviser to companies, Mr. Daschle did not have to register as a lobbyist, and is not technically covered by those rules.

“He’s never lobbied, therefore he’s not in violation of the pledge,” [Press Secretary Robert] Gibbs said. “The president is comfortable with Senator Daschle’s variety of experiences and backgrounds. It’s why he believes he’s best suited to the efforts to reform our health care system.”

The Washington Post offered further details on how “exactly how, without becoming a registered lobbyist, he made millions of dollars giving public speeches and private counsel to insurers, hospitals, realtors, farmers, energy firms and telecommunications companies with complex regulatory and legislative interests in Washington”:

Daschle’s expertise and insights, gleaned over 26 years in Congress, earned him more than $5 million over the past two years, including $220,000 from the health-care industry…

He also has been a trustee of the Mayo Clinic in Rochester, Minn. For part of the $2 million he received from the law firm Alston & Bird over the past two years, Daschle also reported that he gave “policy advice” to United Health, a conglomerate that sells insurance, helps the government administer Medicaid, advises drug companies and physicians and dispenses prescriptions.

The 12 organizations or companies that paid Daschle speaking fees, ranging from $12,000 to $30,000, included the National Association of Boards of Pharmacy and America’s Health Insurance Plans, an influential trade group.

The Health Industry Distributors Association, a trade association representing medical product distributors, wrote to Daschle last week to express concerns about proposed Medicare changes and reminded him of the $14,000 speech he delivered at its conference last year.

Daschle had pledged that for a year following his confirmation he would not have participated in any matters where “a former client of mine is a party or represents a party.” But he never enumerated who all of those parties might be. It appears, in fact, that InterMedia Advisors, the private equity firm that provided him with the car and driver, may be one of the few sources of Daschle’s income that presented no possible conflict of interest (although it does own a few questionable properties, including the magazines Guns & Ammo, Handgun, and Shooting Times.)

An earlier story in the New York Times illustrates just how far former officials can go without ever acquiring the status of “registered lobbyist.” The Times described Daschle’s role at the law and lobbying firm of Alston & Bird, which “represents dozens…of pharmaceutical companies, health care providers, and trade groups for nurses and nursing homes”:

Although not a registered lobbyist, Mr. Daschle, a South Dakota Democrat who was party leader in the Senate, provides strategic advice to the firm’s clients about how to influence government policy or actions. The firm’s Web site declares, “Our health care legislative and policy team has the significant advantage of including two former U.S. Senate majority leaders–Senators Bob Dole and Tom Daschle–both resident in our Washington office and champions of many health care issues in their Senate Finance Committee and leadership roles.”

Daschle, of course, is no different from hundreds of other high-stature elected officials who use their political influence to provide what Alston & Bird calls “significant advantage” to private corporations dealing with the federal government. Few of them ever become registered lobbyists—so few would be disqualified or impeded by Obama’s pledge.

The future of health care reform depends largely on the Democrats’ ability to stand up to the drug companies and insurance companies who drive up costs and drive down access and benefits. If he’d become HHS secretary and health czar, Daschle would have led this reform effort. Personally, I was less concerned about his tax-free car rides than I was about his work on behalf of the very industries he would have been charged with reigning in for the good of the American public.