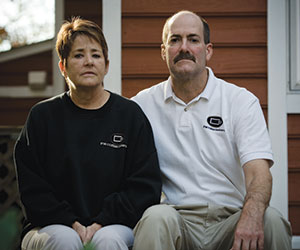 On a chilly spring day last year, Deborah Williams and Richard Welshans sat at their dining room table in Annapolis, Maryland. The waterfront abodes of Baltimore’s ex-mayor and other affluent residents, visible from their window, seemed to drive home just how far the couple had fallen. It was pouring outside, and the roof leaked like a sieve. Even if they could afford to fix it, why bother? It was the bank’s roof now. Their belongings were packed, stacked, and ready to move when the bank finally sold the house. They lacked health insurance and were drowning in debt, having filed for bankruptcy that May.

Their saga began in 2003, not long after Welshans, now 54, was laid off from his sales job at a chemical manufacturer. He got a decent severance package and wanted to do something less corporate. Williams, meanwhile, thought it would be nice to work for herself after 10 years as an executive with a national hair salon chain. So husband and wife decided to open a coffee bar. Knowing nothing about the business, they looked at franchise options, soon settling on Flushing, Michigan-based Coffee Beanery. Upon meeting the owners, they learned that the company no longer did coffee bars, but now focused on full-scale cafés that required a lot of food prep—and a lot of money to open.

Welshans and Williams balked, but company vice president Kevin Shaw was persuasive. Although federal law prohibits franchisors from predicting future earnings, the couple say he told them they would likely clear $125,000 annually in the right location. So they wrote Coffee Beanery a check for $25,000, signed a 15-year franchise agreement, and returned to Annapolis to find that perfect spot.

What Shaw didn’t mention, either in conversation or in the company’s disclosure documents, was that Coffee Beanery’s café concept was a bust; most of the shops closed within three years, leaving their owners deep in debt. By the time Welshans and Williams bought in, some 40 franchises had gone belly-up, including two owned by Shaw himself. Some 60 more have failed since.

By 2004, Welshans had invested $90,000 from his nest egg, plus a Small Business Administration loan of nearly $300,000, to lease and renovate a promising space in an Annapolis office park. But the couple soon began to sense they’d made a huge mistake. On opening day, Welshans had to secure an additional $40,000 home equity loan to keep the business afloat.

The couple hadn’t fully appreciated that Coffee Beanery, like many franchise operators, makes money selling franchises and gear, not coffee. They started getting bills far in excess of what they believed they’d signed up for. There was surveillance equipment, a music system, an obsolete, $14,000 lighting system. The ice machine the company sent was big enough to supply several restaurants, Williams says. Then there was the faulty $8,000 pastry display case, and a cash register so buggy that it sometimes forced them to close for days. In Coffee Beanery’s initial documentation, Welshans and Williams allege, it also failed to disclose a gift-card program and a Pepsi contract that were later imposed. If the couple refused any of it, the company could sue them for franchise violation. “We were losing money hand over fist,” Williams recalls.

After talking to other franchisees and realizing they’d been duped, the couple began looking for an escape route. They weren’t alone. In Chicago, Oliver Garner had invested $300,000 in a Coffee Beanery franchise, sunk extra cash into it, and then sold it a year later for $85,000. The company persuaded Texas resident Laura Deming to open a “double drive thru” store, a completely unproven model that left Deming and her partner more than $450,000 in the hole. Mike Yurick, a Michigan real estate developer who owned a franchise with VP Kevin Shaw, ended up down half a million dollars, much of it in legal expenses incurred to extract himself from the failing business. “They can’t claim they didn’t know [the concept didn’t work], because they were running their own stores,” says Yurick.

Franchising—in which a firm lets independent businesspeople market and distribute goods or services in its name—certainly has its benefits. It lets the franchisor expand its market while spreading risk around, and small investors can capitalize on a proven business model. But neophyte businesspeople may not be in the best position to judge that model before committing their life savings. According to Texas franchise lawyer Richard Solomon, fraud has become rampant in recent years, as people have sought to use their severance packages to become their own bosses. “Crooks are coming out of the woodwork,” he says.

Coffee Beanery is just one of many firms that has been accused of franchise fraud. Last year, a federal judge green-lighted a class action claiming that sandwich chain Quiznos had kept $75 million in fees from franchise owners who were never able to open stores. One indebted California owner embroiled in legal battles with the chain fatally shot himself in a Quiznos bathroom. “Calling yourself a franchise is license to steal,” snaps Justin Klein, a New Jersey lawyer representing some of the Quiznos franchisees.

The federal government doesn’t help matters: Regulators have been facilitating franchise deals while doing little to police them. Between 2000 and 2006, the Small Business Administration granted Coffee Beanery franchisees more than $7 million in loans. Quiznos and Curves, a fitness chain that has also come under legal scrutiny, expanded aggressively during that period thanks to $54 million in sba loans to their franchisees. The Federal Trade Commission, meanwhile, rarely goes after franchise abuses.

States do occasionally sanction companies. In 2005, Welshans and Williams tipped off state regulators to problems with Coffee Beanery’s legal paperwork, leading the Maryland securities commissioner to determine that the company had misrepresented itself in violation of state law. In 2006, officials ordered the company to let Maryland franchisees out of their contracts without penalty. (In January 2008, the Illinois attorney general made a similar determination involving Coffee Beanery.)

Hoping to recoup their losses, Welshans and Williams sued in Maryland federal court. But Coffee Beanery struck back in Michigan; a federal judge there ordered the couple—as required in the fine print of their franchise agreement—to instead take their dispute to a private arbitrator selected by the company. (Such binding arbitration clauses are boilerplate in contracts for everything from cell phones to credit cards.) Welshans had to borrow another $100,000 from his brother-in-law just to proceed with the process, which required steep fees up front.

JoAnne Barron, the arbitrator selected for the case, already knew the company and its lawyer, Karl Fink, who served 20 years as a judge on the state court where Barron has been employed as an attorney. She and Coffee Beanery also shared an accounting firm, a potential conflict given that the case partly involved the company’s accounting practices. Barron had overseen at least two previous franchise disputes involving Fink, finding in the company’s favor both times.

At issue in the Welshans/Williams case was whether Coffee Beanery had violated Maryland law by not revealing, for instance, that company VP Shaw had been convicted of grand larceny in 1987 (for stealing orange highway cones). After 11 days of hearings, despite the state’s previous fraud findings, Barron concluded that Coffee Beanery had provided “adequate, proper and timely disclosure,” as well as “excellent training” and all sorts of great products, equipment, and financial assistance. “Operator inexperience,” she said, was the likely problem.

She ordered the couple to pay $187,452 in legal fees and arbitration expenses—not including their own legal tab or the cost of travel to and from Michigan. Among the charges: $16,800 for Barron’s services, $35,571 for a court reporter and transcription, even $504 for the Beanery lawyers’ lunches.

In civil court, the law almost never requires a losing party to cover the winner’s legal costs, let alone its lunch tab. Arbitration is different. Here are the expenses Deborah Williams and Richard Welshans were obliged to pay after losing to Coffee Beanery.

Beanery’s legal/accounting fees for arbitration, and for defense against Maryland state investigation, to which the couple was not a party: $105,932.40

For Coffee Beanery, the victory served as the proverbial head on a stake: Its lawyers sent a copy of the award to Garner, the aggrieved Chicago franchisee, who abandoned his own arbitration claim soon after. (Congress is considering a ban on arbitration clauses in franchise contracts, but the franchisors are fighting back. The International Franchise Association, of which Coffee Beanery is a member, has spent more than $2 million lobbying in DC since 2005.)

Since their café closed in November 2007, Welshans and Williams have remained unemployed. The experience in Michigan continues to spook them. While pursuing a job with Coca-Cola, Welshans discovered an arbitration clause in the application. Williams, on the verge of getting hired by Macy’s, learned she’d have to submit any dispute to “in-house” arbitration. The couple planned to use ReMax to sell their house, but that, too, required an arbitration clause. In each case, they simply couldn’t bring themselves to sign.

Against all odds, Williams and Welshans have continued their legal battle with Coffee Beanery. They appealed Barron’s ruling, lost, and appealed again. Then, last August, a three-judge panel of the 6th Circuit Court of Appeals struck down the arbitrator’s award—a nearly unheard-of move—ruling that Barron had ignored state law by disregarding Shaw’s felony conviction.

Now it’s the company that’s appealing. If it loses, the couple can finally sue Coffee Beanery in a proper court, where they won’t have to buy anyone’s lunch, pay the judge, or rent an overpriced court reporter.

Whether they ever see their money again may yet be up to a jury of their peers.