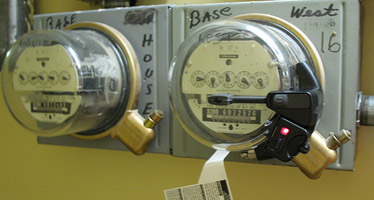 Photo by flickr user <a href="http://www.flickr.com/photos/crimesagainstlogic/3099752052/" target="new">anemergencystop</a> used under a Creative Commons license.

House Democrats wanted to talk energy efficiency. Their GOP colleagues had other things in mind. As Rep. Henry Waxman’s energy and commerce committee begins to forge comprehensive climate change legislation, a preliminary hearing on Tuesday foreshadowed what is likely to be a torturous process due in part to Republican distractions.

Convened by Rep. Edward Markey (D-Mass.), who chairs the House Subcommittee on Energy and Environment, the hearing focused on one narrow aspect of the overall climate change agenda: energy efficiency. “If we are to cut global warming pollution as quickly and as deeply as the science says we must, it is imperative that climate legislation be designed to capture efficiency gains immediately,” Markey said. “By making the potential of energy efficiency a reality, we can save the planet while simultaneously saving consumer’s money, spurring job growth, and meeting our nation’s rising energy demand at the lowest possible cost.”

Committee Democrats, along with several of the witnesses, pointed to case studies that could be used as models for improving energy efficiency nationwide, often touting projects in their home states. “Since 1975, California’s energy efficiency standards for buildings and appliances have saved residents and businesses $56 billion in energy costs and have avoided the need to build 24 major power plants,” Waxman, who is from the Golden State, said. Philip Giudice, head of the Department of Energy Resources in Massachusetts, touted the Bay State’s efforts to incentivize energy efficiency for utilities and businesses. Thomas King, president of National Grid US, explained how his company has helped consumers save $3.6 billion in energy costs by undertaking efficiency projects. Even the Dow Chemical Company had a representative on hand, who noted that firm has used efficiency measures to avoid producing 86 million metric tons of carbon dioxide emissions, a fact that earned it EPA’s 2008 Energy Star “Partner of the Year” award.

But while the Democrats on the panel, along with the industry witnesses, embraced energy efficiency as a key component of climate change legislation, the Republican contingent chose instead to press one seemingly minor issue so frequently it appeared they had been handed a single set of marching orders before the hearing began. At least six members of the GOP used their allotted time to bash a minor provision of the stimulus bill pertaining to “decoupling,” a policy that disconnects energy utilities’ profits from their sales. While this seems vaguely anti-capitalist, it means that utilities’ profits remain constant if they sell less, meaning these companies can pursue efficiency measures without working against their financial interests. The practice has been embraced in California, Maryland, and elsewhere. Former President Clinton has called decoupling a “simple, brilliant idea.” As he described it in September 2007:

So suppose [a utility company] make[s] your home 30 percent more efficient, they charge you 15 percent more per kilowatt hour, so your bill goes down 15 percent and they get the financing they need, collectively it will be much less expensive for them than building a new power plant. They’ll be able to finance and we won’t be contributing any more to climate change.

The problem, as Republicans pointed out repeatedly in Tuesday’s hearing, is that homeowners, not utility companies, often make their homes more energy efficient. And under decoupling, a homeowner who makes her house 30 percent more efficient doesn’t see a 30 percent drop in her energy bill. She is charged more than she ought to be so that the energy company doesn’t go out of business. Meanwhile, people who don’t weatherize their homes or use solar panels may go on paying the same rate as before.

Republicans on the panel repeatedly insisted that the stimulus bill made decoupling mandatory. They also distributed a chart claiming that under decoupling, residential or commercial energy users would be charged a flat fee (like cable TV subscribers) that could mean a rate drop for high-energy users and a rate increase for low-energy users.

But there are a couple key problems with the anti-decoupling argument advanced at the hearing. First, the stimulus bill doesn’t make decoupling mandatory. Second, it wouldn’t necessarily result in a flat rate. R. Neal Elliott, Associate Director for Research at the American Council for an Energy-Efficient Economy says, “The way we understand it, the original language made it mandatory. It was a precondition for second-year funding. But it was removed.” Elliott says that the language is now “hortatory”—meaning the stimulus bill urges state public utility commissions and regulatory bodies to “look” at decoupling.

Elliott also notes that, to date, there remains no legal definition of decoupling. So there is no reason to assume that it will result in flat utility rates that penalize low-end users. “Most of the utilities that have been decoupled in this country have been local natural gas distribution companies,” says Elliott. “Electric utilities do not function the same way as natural gas utilities.” Meaning, there are no hard and fast rules on how decoupling would change your electric bill. The only state that has embraced the decoupling of energy utilities over the long term, California, has seen success. It has held its per capita energy use flat over the last 25 years. Meanwhile, the nationwide figure has risen by 50 percent over the same period.

Decoupling is by no means a perfect solution, but nor is it an issue worth obsessing over for the entirety of a congressional hearing. If the minority is already picking fights over small issues, expect them to make war over larger ones as the climate bill is pieced together in the coming months.