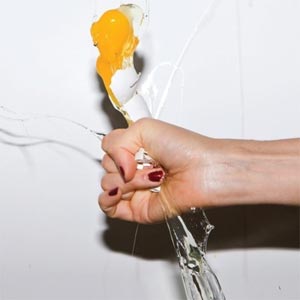 Has everybody in America thrown out their guitars? When do we get to call this a trend? Okay, sure, a quick look at the iTunes Top 100 shows All-American Rejects and Jason Mraz still wielding the axes in the Top 20. But there’s something New Wave-y in the air when even rapper Flo Rida hits #1 with a Dead or Alive cover and bisexual robo-pixie Lady Gaga is America’s sweetheart.

Into this synthtastic moment strut the Yeah Yeah Yeahs, and while Nick Zinner’s noisy, careening guitar work has always defined the band’s sound, they’re also respectably New Wave, with an appreciation for accessible, dramatic pop melodies, not to mention Karen O’s colorful outfits. Over the last few years, they’ve even started offering up their hits for remixes, and Zinner himself has tried reworking the band’s songs for the dance floor. It feels completely natural that they’d turn to drum machines and keyboards on It’s Blitz!, and they still wring an organic, rich noise out of their gadgets.The question is, are they also squeezing good songs out of their heads? This is a band with a lot to live up to in that regard: “Maps,” from their 2003 debut, became an unexpected smash nearly a year after its release—it was the “Paper Planes” of its day. There are five ballads on this 10-track album, and while some are quite lovely, they all have the feeling of reaching for, but not quite touching, “Maps.” Track four, “Skeletons,” has a cinematic sweep, with a mournful keyboard melody and dramatic, pounding drums, but Karen O seems a little lost, unenthusiastically intoning “Love don’t cry,” and I’m not sure if it’s a statement or a request.

The uptempo half of the album is a little more successful: “Dull Life” brings back the guitars for a swinging four minutes, but if you’re going to copy “Lust For Life,” you need to change the title a little more. Okay, I’m being very critical, and I should say that I do like this band, and I’m enjoying this album, really. “Dragon Queen” has a quirky, Talking Heads feel, and lead single “Zero” (listen to it here) soars like Blondie covering OMD. But I miss the Yeah Yeah Yeahs who reached out and throttled my neck on “Date With the Night” and who got right to the point on “Gold Lion.” They used to be bigger than the sound; now, the sound is all there is.

It’s Blitz is out April 14 on Interscope.