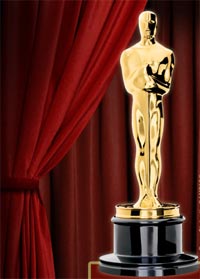 This just in: water may possibly be wet! The irascible Los Angeles columnist Nikki Finke is claiming there is “flopsweat panic” backstage that the Oscar ceremony, now just 24 hours away, will be a dud, and even CNN agrees. Stars from Jack Nicholson to Nicole Kidman have apparently begged off presenting, Peter Gabriel pulled out after being offered 65 seconds to perform his nominated song, and fans of The Dark Knight are attempting to boycott the ceremony because it didn’t get enough nominations. Finke also has a whole list of other complaints, including something about how previous actor winners are being forced to present as a group, which is apparently scandalous. She also claims that “trophy boys” will now join the young ladies who carry the statuettes onto the stage, an acknowledgment that “only females and gays” watch the show any more. It’ll be the biggest failure ever!

But honestly, let’s just remember that the Academy Awards is always a terrible TV show. Jon Stewart had a few good moments last year, but for most of the ceremony he was little more than a placeholder, and No Country for Old Men‘s wins were widely anticipated. In 2006, it was The Departed and Ellen Degeneres (yawn), and in 2005, the big Crash-Brokeback upset only came at the last minute of a very long and boring ceremony. Finke claims ad rates are down from $1.7 million last year to $1.4 million this year, but that probably has little to do with anticipation of a crappier show and more to do with that wee little, you know, collapse of our entire economic system. Of course Hugh Jackman will be embarrassing to watch, but no worse than anybody else—don’t get me wrong, I’d pay to see Wolverine read (and then rip up) the phone book, but real-life Jackman in song-and-dance mode is smarmy and self-satisfied. The only good thing about the Oscars this year will be the same thing that’s always good about them: watching with your snarky film-buff friends who mercilessly skewer the winners and presenters. Plus, it’s an excuse to have a cocktail at 3pm.