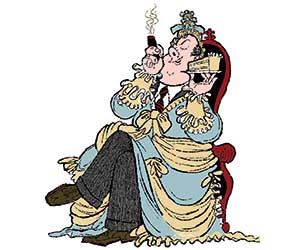 According to Forbes’ “cost of living extremely well index,” the price of luxuries like caviar and yachts jumped 12% in 2008.

55% of millionaires say they now worry they won’t be able to maintain their current lifestyles.

Things that the rich have cut back on, according to the New York Times: plastic surgery, jets, maids, tipping, and jewels.

Last February, an heir to the Johnson & Johnson fortune wrote on the Huffington Post, “For the mega-rich, recession brings with it the ability to live well at a lower cost and with less of a hassle.”

Asked in November if he’d take a cut in his $2.2 million salary, General Motors ceo Rick Wagoner said, “I do have a son in college I have to pay for somehow.” After public outcry, he announced he would be paid only $1 for the year.

Those firms have since received $60 billion in federal bailouts.

In their 2007 benefits package, Wells Fargo executives received as much as $20,000 apiece to put toward “personal financial planning.”

In December, after just 3 months on the job, Merrill Lynch executive VP Peter Kraus quit with a $25 million parachute.

After workers at Republic Windows & Doors successfully staged a sit-in for severance benefits in December, ceo Richard Gillman demanded that any new bank loans to help them must also cover the leases on his bmw and Mercedes.

Hyundai says new customers may return leased or financed cars if they get laid off in the next year.

60% of ceos surveyed in November said they expected to let workers go in the next 6 months.

More than 4.5 million Americans are currently receiving jobless benefits—more than at any time during the past 26 years.

As of last September, almost half of all states were at risk of running out of funds for unemployment benefits by the end of 2009.

Only 37% of unemployed Americans currently collect jobless benefits. During the 1950s economic boom, 50% did.

In the mid-’70s economic slump, jobless benefits were extended to 65 weeks. Today, the limit is 39 weeks.

The average unemployment benefit is $293 a week.

Campbell’s Soup now touts 5 of its condensed soups as “the original dollar menu.” Sales were up 12% in the most recent quarter.

Nearly 1 in 5 Americans with retirement accounts say they’ve recently made an early withdrawal.

Hustler‘s Larry Flynt and the creator of Girls Gone Wild have proposed that the government offer the adult industry a $5 billion stimulus because “the economy has made America’s appetite for sex go limp.”

…Or not: The maker of Wet, a personal lubricant, tells Forbes that his firm grew 30% in 2008: “People are deciding to stay at home and engage in inexpensive entertainment.”

Las Vegas’ mayor says the federal stimulus should fund a $50 million Mafia museum. “That’s what the Main Street stimulus program is all about,” he says.

In the first 3 quarters of 2008, finance, insurance, and real estate companies spent $343 million on lobbying.

In September, the Treasury Department quietly—and unlawfully—nullified Section 382 of the tax code, giving banks a tax windfall of as much as $140 billion. The move may be worth $25 billion to Wells Fargo alone.

According to the Daily Beast, “secret shopping” was this winter’s newest trend among Manhattan’s superrich. The wife of disgraced Lehman Brothers ceo Dick Fuld reportedly asks Hermès to put her purchases in unmarked bags.

In September, fashion designer Erin Wasson told Nylon TV, “The people with the best style, for me, are the people that are the poorest. When I go down to, like, Venice Beach and I see the homeless, I’m like, ‘Oh my God, you’re pulling out, like, crazy looks.’ They pulled shit out of, like, garbage bags.”

A week after its $4 billion bailout, Chrysler spent more than $200,000 for a full-page ad in the Wall Street Journal that read “Thank You America.”

The application for federal bailout funds is just 2 pages long. The first page is for contact information only.

It took Mother Jones interns 27 minutes to request bailout funds for the organization. Applying for welfare takes about 4 hours. 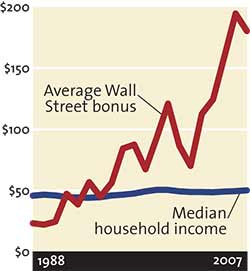 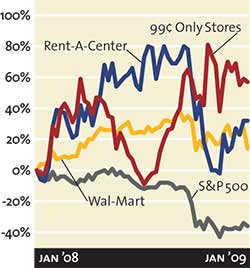