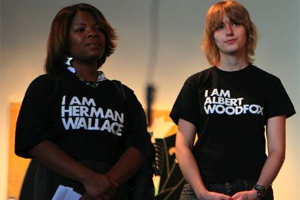 On a brisk New Orleans morning, as hotel workers, attorneys, and the occasional tourist walked past, a small crowd gathered outside the US Court of Appeals on Camp Street in the city’s central business district. They came from as far away as Maine and California, and as close as a few blocks away. They brought “I am Herman Wallace” and “I am Albert Woodfox” T-shirts, a documentary film crew, and a bubble-shaped van–donated by ice cream magnate Ben Cohen–that called for Wallace and Woodfox’s freedom. They were all here for a hearing of the 5th Circuit Court of Appeals that would decide whether to uphold a federal judge’s decision and let Woodfox to go free.

Standing out among the gathering, with a sharp suit and a deep baritone voice, was Parnell Herbert, an activist known in the local spoken word community as the “poetic panther.” Herbert grew up with Woodfox, who has been in solitary confinement for 36 years. Displaced to Texas by Hurricane Katrina, he returns to New Orleans whenever there is movement in his friend’s case. “I’m trying to draw attention to a situation the state of Louisiana wants to keep buried,” he says. “We’re here to show support for the truth.”

It is rare for a prisoner to leave the Louisiana State Penitentiary at Angola, a former slave plantation; it’s estimated that 95 percent of the inmates will die behind bars. (The day before the hearing, the Pew Center released a report (pdf) showing that one in 26 Louisiana adults is under correctional control, the largest percentage in the US and the world.) One who did make it out was Robert King, the third member of the Angola 3, released in 2001 after a judge overturned his conviction. “We hope this nightmare is finally ending,” King told me at the hearing.

Inside the courtroom–a smallish room with grand, 50-foot-high ceilings–the front row held another type of Angola resident: guards, administrators, and their family members. “I asked Warden [Burl] Cain if anyone is running Angola,” attorney Nick Trenticosta told me. “Because it seemed like everyone was here.”

There was no courtroom spectacle or confrontation. Observers from both sides followed the proceedings with an intense and studious quiet, some taking notes. The hearing lasted about an hour. Lawyers for both sides made their case, occasionally interrupted by questions from the three-judge panel. “I was very encouraged by today’s argument,” Trenticosta told me later. “I think the court understands our case, and that’s half our job.”

After the hearing ended, supporters chatted, dissecting the proceedings. The court may take between four weeks and six months to release a ruling, but that time seems short compared to the decades the case has already taken. Even if the court lets stand the ruling overturning Woodfox’s conviction, the state has already vowed to retry him. Still, among Woodfox’s supporters–many of whom were not yet born when he was last a free man–there was a palpable expectation of success. “Albert has hope,” King told me. “And as long as Albert has hope, we all have hope.”