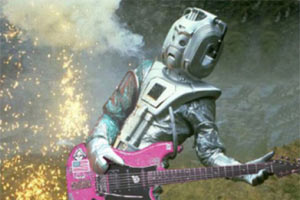 Back in April, I posted about an enjoyable live performance by The Ting Tings where the UK duo used some form of backing track or sequencer for extra harmonies, bass and percussion. It got me to thinking about what the boundary is between “live” and “not live” music in a performance setting, and why audiences are willing to accept certain amounts of prerecorded material in some live shows, but not in others. I even drew a little graph in an attempt to define what we call “live.” Of course, as an electronic music enthusiast and DJ, I wasn’t passing judgment, just trying to describe the phenomenon, but commenters (always a charming bunch) went on the attack, saying I didn’t understand anything about live music and insulting me in vivid enough terms they got their comments deleted. Crazy! Well, today the folks at NPR’s All Songs Considered blog waded into the topic, and I hope they get nicer comments. They noticed backing tracks a-plenty at the recent SXSW music festival in Austin:

Backing tracks are the anabolic steroids of live music. They add muscle where there otherwise might just be a bunch of humans doing the best they can. And there’s no denying that they can make something average sound pretty over-the-top. Would you rather hear the climax of The Decemberists’ new record without the children’s choir? (It’s admittedly nearly impossible to pull off live, since you can’t expect a bunch of kids to tour with the band.) Would Loney Dear be less Loney without the pizzicato strings? (They’re probably sampled anyway.) Would K’Naan be less K’Naan without the invisible drum ensemble?

I admit that I want my concert-going experience to be as aurally rich as possible, so I don’t want The Decemberists to just leave off the choir, but it still feels just a little bit cheap that someone’s just hitting “play” on a digital choir. One interesting solution I remember was thought up by electronic duo The Chemical Brothers, whose legendary live shows incorporated improvisation and rock-style dramatics while maintaining the “greatest hits” feel of a DJ set. Their popular song “Setting Sun” featured the vocals of Oasis’ Noel Gallagher, who couldn’t be expected to go on tour with them for just the one song, since he’s a big rock star. Instead, the band took the first line of Gallagher’s vocals and used a digital interface to stretch and stutter the sample, effectively treating the vocal as another instrument which they “played” live. Of course, all this was taking place over a pounding drum machine, which disqualifies them as a live act in many people’s eyes anyway. So, Riffers, have you come to any conclusions on how much pre-recorded or sequenced material is acceptable in your live shows, and if the use of prerecorded material is ingenious enough, does that make it better?