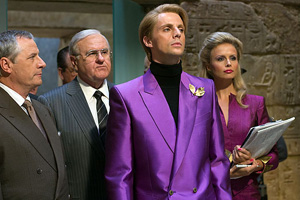 I just saw Watchmen and—spoiler alert!—it kind of sucked. But not just for the obvious reasons (it’s based on an impossible-to-adapt comic book; it’s terribly acted, pointlessly violent, and infuriatingly shallow; and it ruins a great Leonard Cohen song). It was awful because it turned an unnecessary subplot about clean energy into a major plot point that’s the foundation of its unsatisfying climax. Bear with me: In the original Watchmen book, we learn that atomic demigod Dr. Manhattan (owner of a hard to ignore, possibly offensive, glowing blue penis) has figured out a way to make mass quantities of efficient lithium batteries, and as a result, by the 1980s, electric cars have made gas guzzlers obsolete. Goodbye climate change! Yet in the movie, electric cars are nowhere to be seen, though we learn that Dr. Manhattan is working with impossibly skinny crimefighter-turned-tycoon Ozymandias (AKA “the world’s smartest man”) to come up with some new form of vague yet CGI-intensive clean energy. And that’s where things start to get really dumb.About halfway through the movie, Ozymandias meets with Lee Iacocca and other automobile executives (see image). He berates them for their dependence on fossil fuel and informs them that a new day is coming. (Iacocca then gets shot in the head by an assassin.) None of this is in the book, and the anachronistic mini-rant about the evils of fossil fuels feels like typical Hollywood agenda-stuffing. Director Zack Snyder could have left it at that, but no. Instead, in his biggest digression from his source material, he ditches Ozymandias’ plot to bring about world peace, The Day The Earth Stood Still-style, with a fake yet devastating alien attack. Instead, Ozymandias uses the clean energy doohickey to kill millions, framing Dr. Manhattan along the way. The world steps back from the brink of nuclear armageddon to unite in harmony against the naked blue dude. The clean energy device, it seems, was an elaborate hoax, a doomsday device masquerading as the solution to all our environmental woes. I imagine this would give alternative energy sources a pretty bad name. After all, who’s going to want to invest in solar energy when it’s just going to kill us all? Which means that in addition to being a mass murderer, Snyder’s Ozymandias is a clean-energy huckster who’s just doomed us to a slow death by fossil fuel addiction. Nice going, genius. (And you even ticked off the real Lee Iacocca, who’s alive and well, thank you very much.)