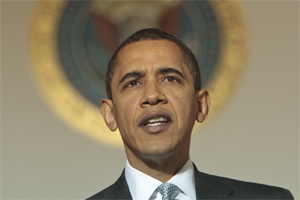 President Barack Obama threw some tough love at GM and Chrysler on Monday morning. In a much-anticipated speech, he said that neither of the ailing automakers deserve additional billions from the federal government–yet. Obama noted that his administration had reviewed the respective restructuring plans of the two firms and that “we have determined that neither goes far enough to warrant the substantial new investments that these companies are requesting.” But this is not his final answer. The president offered each “a limited period of time” to work out better plans. In Chrysler’s case, that means sealing its merger with Fiat within 30 or so days.

Obama’s speech was good politics and probably good policy. After the AIG bonuses controversy and with bailout fatigue setting in, Obama was able to show he can come down hard on corporate screw-ups. He essentially forced out GM CEO Rick Wagoner and now is pressuring GM and Chrysler to go further in remaking themselves. This has led to the obvious question, which was indeed asked of White House press secretary Robert Gibbs at Monday’s briefing: why is Obama being more of a hard-ass with Detroit than with Wall Street? Gibbs did not take that question by the horns–though he did point out that the feds were not particularly kind to Wachovia and Merrill Lynch. But this asymmetry aside, Obama is seizing the opportunity to signal he won’t throw billions at just any collapsing corporate behemoth.

The president does appear to want to reach the point when he can bolster GM with more federal money–and use federal leverage to push the company to manufacture cleaner and greener cars. He said that in the next 60 days,

my team will be working closely with GM to produce a better business plan. They must ask themselves: have they consolidated enough unprofitable brands? Have they cleaned up their balance sheets or are they still saddled with so much debt that they can’t make future investments? And above all, have they created a credible model for how to not only survive, but succeed in this competitive global market? Let me be clear: the United States government has no interest or intention of running GM. What we are interested in is giving GM an opportunity to finally make those much-needed changes that will let them emerge from this crisis a stronger and more competitive company.

As for Chrysler, Obama was tougher on the tough love, declaring, “It is with deep reluctance but also a clear-eyed recognition of the facts that we have determined, after a careful review, that Chrysler needs a partner to remain viable.” In other words, Chrysler, submit to Fiat, or die. But, he added, if that merger (or takeover) can be worked out–and a “sound arrangement” reached–he’d be willing to kick in $6 billion in loans. (Soon after Obama’s speech, Chrysler announced it has agreed on the terms of a formal alliance with Fiat. What a coincidence.)

Obama realizes that an auto bailout is not popular. So when he discussed potential further federal funding for the GM and Chrysler, he emphasized the promise of a federally-enabled new-and-improved Detroit building cars of the future that pollute less and lessen the nation’s dependence on foreign oil. He also attempts to strike a communal tone: “When a community is struck by a natural disaster, the nation responds to put it back on its feet. While the storm that’s hit our auto towns is not a tornado or a hurricane, the damage is clear, and we must respond.” In other words, what’s good for GM workers is good for the country.

So in addition to pushing GM and Chrysler to craft plans that will allow him to assist them–like Tom Cruise urging Cuba Gooding, Jr. in Jerry Maguire, “help me to help you”–Obama announced a few other initiatives to boost the carmakers. He said that he will get stimulus package funds out the door PDQ to purchase cars for the government, that the Treasury Department is working to free up the flow for credit that can finance car purchases, and that the IRS will be promoting a new tax benefit that allows purchasers of new cars to deduct sales and excise taxes. He also signaled that he is sympathetic to congressional proposals for tax credits for consumers who turn in gas-guzzlers and buy new fuel-efficient autos.

Yet one question is, how far will Obama go in attempting to transform the auto industry? He will be demanding that GM’s and Chrysler’s plans contain provisions for the stepped-up manufacturing of greener vehicles. Can he go farther than that?

Earlier this year, Jamie Kitman, a columnist for Automobile magazine proposed that Obama turn this moment of crisis into a grand double-dip and nudge the automakers to build mass transit equipment:

[N]ow is the time for them to build new things. New kinds of cars, trucks and buses–in fact, GM is already at the forefront of hybrid bus production–that don’t run on gasoline, or use less of it. And how about trains, trolleys, and subway cars? We used to manufacture them here, but those once-lucrative industries have been ceded to foreign competitors. It’s time to reclaim these honorable lines of work on our way to actually doing something about energy independence and curtailing carbon emissions.

There is a great precedent. During World War II, President Roosevelt directed the manufacturing giants of the day to bring the fight to that era’s Axis of Evil. The best Detroit executives were chosen to oversee the wartime conversion of automobile factories to build the weapons of war. American industry, staffed by autoworkers, became an “arsenal of democracy” turning out airplanes, tanks and guns for the war effort.

Could these dinosaurs of the industrial age turn around and do more than simply make better automobiles? Figuring out how to stay in car business appears to be a difficult enough task for them. But could they be part of a grander national retrofitting involving trains, trolleys, and trams? (Of course, GM did its bit to kill mass transit in years past.) In The Washington Monthly, Phillip Longman, a senior fellow at the New American Foundation, recently wrote that a freight rail electrification project could employ many laid-off auto workers, and he pointed out that GM until only a few years ago was the nation’s “dominant diesel-electric locomotive maker.” Were Obama to elbow GM and/or Chrysler (with or without Ford) into producing smarter transportation–assuming there’s a market underwritten by stimulus spending or fueled by just plain demand–that would be going the extra mile. But before Obama can consider doing, he will first have to keep the automakers on the road and out of the junkyard.