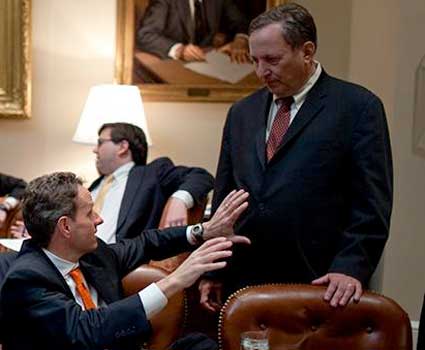 Though the stock market may have lifted off on news of Treasury Secretary Timothy Geithner’s purchase plan for toxic assets, don’t be fooled by Wall Street’s optimism. The plan is even worse than the one floated by Geithner’s predecessor, Henry Paulson, last fall. At least Paulson wanted the government simply to buy the banking industry’s junk outright—and spend less doing so.

Under Treasury’s complicated Public-Private Partnership Investment Program, which was unveiled on Monday morning, Geithner wants to strike a deal with private investors who wouldn’t touch these assets without serious incentives. The program will essentially give investors between $500 billion and $1 trillion dollars—at this point, what difference does half a trill make?—of spending money to go shopping for the bad assets that banks are dying to get off their books. And the kicker? The White House says the private sector is doing us a favor.

In the rosiest scenario, the assets will have some value one day. In that case, the government will have entered the hedge and private equity fund prime brokerage business. That is, the business of lending money to private funds backed by small amounts of collateral that the funds themselves post. In this instance that collateral would consist of—you guessed it—toxic assets. Remember, it was all the leverage, or borrowing, in the system that created the current mess. Surely, someone in Washington must question how more leverage, on the back of the same toxic assets, makes sense. At any rate, if this strategy pays off, private investors would profit more than the government, or taxpayers, because they risked less capital to buy the assets in the first place.

But here’s another possibility: The assets have little or no value, because they have no incoming cash or no buyers—otherwise known as the situation we’re presently in. To this day, we don’t even have any knowledge of what exactly these assets are. The government won’t tell us because the banks won’t tell the government. And if the assets zero out, the private investors will largely be covered. The taxpayers, of course, won’t.

That plan is based on the assumption that private funds want to bother with any of this. One thing’s certain, though: The sweeter the deal the government makes to entice investors to buy assets they’d otherwise have no interest in, the worse it is for taxpayers. That’s the brand of capitalism that was at work before this crisis, and it seems to have survived the economic collapse intact.

Geithner told the Wall Street Journal last week, “Our judgment is that the best way to get through this is if we can work with the markets…We don’t want the government to assume all the risk. We want the private sector to work with us.”

The private sector helped create and spread a toxic stew of derivatives. Yet Geithner’s strategy to “fix” the financial system is to ask its riskiest, most opaque players—the companies that shirked the most in taxes and were led by the execs who made the most money during the build-up years—to buy the system’s junky assets in order “to cleanse it.” And this will come after $350 billion of capital injections and trillions of dollars of Federal Reserve loans haven’t fixed the problem.

On top of this, Geithner doesn’t think investors who participate in his program should be subject to any restrictions. No executive pay caps, no nothing. Moreover, the toxic assets to be brokered under this plan will be selected by the players that have not been able to unload them so far. It’s like going to a used car dealership and saying to the car salesman, “I’ve got $100,000 to buy whatever you have to sell me,” and expecting him to provide you with his most valuable inventory.

Of course, bank stocks rallied on this cheery news. The Dow perked up like a heroin addict about to get a fix. Why wouldn’t banks welcome the chance to participate in a government-sponsored program to clean their polluted balance sheets, where their old clients, the same ones who wouldn’t be caught dead purchasing these toxic assets, could be paid for participating?

This is how Christina Romer, chair of the White House Council of Economic Advisers, described the plan on Sunday night: “What we’re talking about now are private firms that are kind of doing us a favor, right? Coming into this market to help us buy these toxic assets off banks’ balance sheets.” She added, “They are firms that are being the good guys here—coming into a market that hasn’t existed to try and help us get toxic assets off banks’ balance sheets.”

Which good guys? The financial firms that had their profits taxed at 25 percent rather than at 35 percent, like the rest of us, and made oodles of money in 2006 and 2007 before their bad bets greased the way to an economic collapse? Or the ones that bet housing-related securities would fail, in a self-fulfilling manner?

I’ve never been a fan of any toxic asset purchase plan (nor of the capital injection through stock purchase plans). Randomly buying a bunch of heavily layered, heavily leveraged securities and expecting them to be profitable some day has never made sense to me, especially when nothing is being done to bolster the underlying collateral. The White House and Treasury Department are throwing money at the banking and finance industry, while simultaneously doing little about the loans and borrowers at the bottom of the crisis—not to mention the very risky and overleveraged structure of the banking system itself.

The administration is caught up in crafting big plans to solve the problems of big banks. Instead, it should be dissecting the system into transparent, quantifiable, and understandable parts—and then dealing with those elements that can and should be assisted. Geithner ought to jettison the too-big-to-fail nonsense and keep it simple: Break up the banks into their commercial and speculative parts, and separate the assets along similar lines. Let the speculative parts die, and tend to the rest. As it stands, the present solution—propping up the entire system in a complex, highly leveraged manner that depends on the kindness of the culprits that caused this mess—is a colossally expensive exercise in bipartisan stupidity.