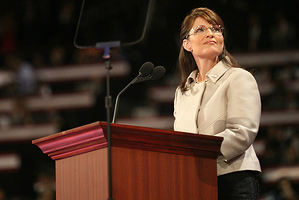 On the campaign trail last year, Alaska’s Republican governor, Sarah Palin, sold herself as a crusading reformer who despised earmarks–those federal spending projects that Capitol Hill legislators of both parties slip into appropriations bills. Though her claim to have turned down an earmark for the now-infamous Bridge to Nowhere was debunked by assorted media outlets, she kept on insisting that if she were elected vice president, she would lead a charge in Washington against earmarks.

That was then. The omnibus spending bill that President Barack Obama signed on Wednesday includes earmarks that Palin sought.

The $410 billion bill has been lambasted by Republicans and a few Democrats for being loaded with nearly 9,000 earmarks covering $7.7 billion in projects. Senator John McCain, Palin’s former ticket-mate, has blasted Obama for supporting the earmark-laden legislation. (“So much for the promise of change,” an angry McCain howled from the Senate floor.) But earmarks in the bill are quite generous to Palin’s state. According to Taxpayers for Common Sense, a Washington-based watchdog group, Alaska will receive more money, per capita, from the bill’s earmarks than any other state. (Alaska will pocket $209.71 for each state resident.) One hundred earmarks in the bill, worth a total of $143.9 million, are tagged for Palin’s state.

Asked by Mother Jones about the Alaska earmarks, Bill McAllister, Palin’s communications director, pointed to Sen. Lisa Murkowski (R-Alaska) and Rep. Don Young (R-Alaska) as responsible for these provisions. But in an email, he noted that a “few of [the Alaska earmarks] were requested directly” by Palin. But how many? And which ones? McAllister declined to say. Mother Jones also asked McAllister if Palin believes it was appropriate for Murkowski and Young to insert these earmarks into the legislation and whether she will reject any earmarked funds. He did not answer those queries either.

At the Republican convention in Minneapolis last summer, Palin introduced herself to America by declaring she was a foe of wasteful spending who had “championed reform to end the abuses of earmark spending by Congress.” She claimed that she had said “thanks, but no thanks” to America’s most infamous earmark, the Bridge to Nowhere. During the presidential campaign, McCain railed incessantly against earmarks, at one point thundering that if he made it to White House, “I will take an ink pen and I will veto every pork barrel earmark spending bill that comes across my desk.”

In trying to beat back the omnibus spending bill, McCain denounced earmarking as a “corrupt practice.” And he employed the timeworn tactic of publicly mocking silly sounding appropriations: “How does anyone justify some of these earmarks: $1.7 million for pig odor research in Iowa; $2 million ‘for the promotion of astronomy’ in Hawaii; $6.6 million for termite research in New Orleans; $2.1 million for the Center for Grape Genetics in New York.” But, as they often say in Washington, one legislator’s pork is another legislator’s necessary program.

The earmarks that Palin apparently will accept could also be ridiculed in a McCain-ish fashion. They include $475,000 to construct a “heritage center” in the Chilkat Indian Village; $150,000 to support private industry participation in two international fishery groups; $200,000 for investigating and prosecuting bootlegging; $200,000 for researching the king crab; and $855,000 for building fairgrounds. The Alaska earmarks also include $1.2 million for construction work on an airport on Akutan, a tiny island that relies on seaplane for contact with the Alaskan mainland. (The Coast Guard handles medical emergencies.) The island has roughly 800 residents. Could this be dubbed the Airport to Nowhere?

Whether or not any of these projects is worthwhile–the people of Akutan might need an airport to keep their community alive–Palin is certainly not decrying earmarks when they are benefiting her state.

Alaska’s earmarks have been primarily the handiwork of Murkowski and Young. Former Senator Ted Stevens secured some of them, but had then transferred to Murkowski when he lost his seat in the 2008 elections after being convicted on corruption charges. According to Taxpayers for Common Sense, Murkowski scored big with 71 solo earmarks, the second highest number in the Senate, totaling over $74 million. (Counting also the earmarks she requested jointly with other legislators, Murkowski won a total of $181.5 million in projects.) Young, Alaska’s only House representative, obtained 10 solo earmarks, worth $22.5 million. All his earmarks total $71.3 million, making him the 11th most productive earmark-seeker in the House. All of this funding is headed Alaska’s way even though, according to Bureau of Labor Statistics numbers, Alaska is one of the few states that experienced an increase in employment during 2008. (“Our state budget is under control,” Palin said at the convention. “We have a surplus.”)

Despite her ample earmarking, Murkowski harshly criticized Obama’s stimulus bill for containing wasteful spending. “At a time when every dollar counts,” she said, “we went overboard.” Yet she voted for the omnibus spending legislation–because of the earmarks. “Although I have concerns about the price tag of this bill,” she explained, “I heard from a number of Alaskans telling me how important some of the Alaska-specific projects were to their cities, towns, communities and villages. Defeat of this bill could have resulted in Alaska missing out on nearly $200 million in funding.”

In other words, earmarks rule in Alaska. And Palin, who last year tried to ride an anti-earmarks campaign into the vice presidency, is apparently willing to exploit the earmarks process, make her own requests, accept all the money that comes, and put that crusade of hers on hold.