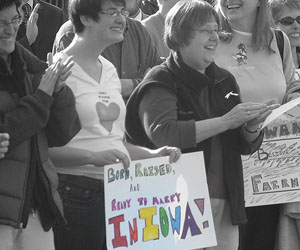 Tom Fiebiger, a Democratic state senator from North Dakota, has mixed emotions about the events of April 3. On that morning, he learned that Iowa was to become the first state in the Midwest to recognize same-sex marriages. In the afternoon, he watched as his own state’s House of Representatives voted 54-to-34 to kill a bill that would have protected North Dakotans from being fired, denied credit, or evicted because of their sexual orientation or gender identity. As the father of a gay son and the bill’s chief sponsor in the Senate—where it passed 27-to-19 in a bipartisan vote—Fiebiger views the Iowa ruling as “kind of bittersweet.”

The news from Vermont was kind of bittersweet, too. For four days, the Iowa Supreme Court’s unanimous decision was being talked about as perhaps the unlikely tipping point for the lesbian, gay, bisexual, and transgender (LGBT) rights movement. But then Vermont’s legislature gave a thumbs-up to same-sex marriage, and the attention turned back toward the coasts—and ongoing battles in California and the Northeast.

While New England has several short-term prospects for same-sex marital bliss, the Midwest is primed for a bumper crop of basic anti-discrimination bills—legislation unthinkable just a few years ago—needed to build foundations for marriage equality down the road. Sure, marriage is nice and all that, but it’s nicer still to have laws that make it illegal for a gay man’s boss to say, “Hit the road, faggot.”

A little national support now, state activists say, might mean the difference between incremental progress and a burst of progressive legislation in the Heartland. After all, just about everybody expects California and New York—where Gov. David Paterson is pushing same-sex marriage legislation—to cave at some point. But in states that have never passed a gay-rights bill, a string of legislative victories would make it hard to argue, as anti-discrimination opponents did in North Dakota, that those rights embody “New York” values. “For the people on the coasts, this is flyover territory, and nothing really important ever happens in the Midwest,” says Glenn Carlson of Fair Wisconsin, a gay-rights group. “But that’s really not true at all. History shows that, and the Iowa decision really affirms it.”

And in these Midwestern states, where much of the groundwork is already laid, a concentrated push could also lead to domestic partnerships and marriage rights faster than many people realize. “Iowa passed their nondiscrimination bill in 2007,” says Karen Mudd of Equality South Dakota Institute, “and look where they’re at now.”

Indeed, marriage rights in Massachusetts, Connecticut, Iowa, and Vermont were preceded by years of lobbying for more fundamental protections and benefits for same-sex couples. Until recently, in fact, activists in the Heartland were resigned to spending their time and energy blocking bills aimed at stripping away their rights. Marriage seemed like a distant goal. “We’re used to playing defense,” says Mudd, whose group formed two years ago to pass pro-rights legislation.

Activists like Mudd have to contend with constitutional bans on same-sex marriage—and repealing those will require unprecedented levels of public support. “It’s important for people to realize why we can’t have the same result that Iowa has right away,” warns Fair Wisconsin’s Carlson. “It raises expectations—maybe unreasonably—about what we can achieve in the next three to five years.”

And yet the next legislative session could usher in a wave of game-changing achievements. Before Iowa was on anyone’s lips, 2009 was already notable for the amount of pro-LGBT legislation in play. Gay-rights groups pushed anti-discrimination bills in Montana, Indiana, Michigan, Pennsylvania, Kansas, Missouri, Utah, Ohio, and North Dakota. Lawmakers in Minnesota, Indiana, and Utah sought limited rights for gay couples, like power of attorney, hospital visitation, and right of inheritance. The most controversial bills of the lot looked to expand same-sex adoption rights in Utah and create domestic partnerships in Montana and Wisconsin.

While the bills that were brought to a vote failed (narrowly), first-time legislation fared surprisingly well, and legislation reintroduced from past sessions went further through hearings, committees, and floor votes than ever before. Notably, pro-gay bills fared considerably better than anti-gay legislation. Wyoming’s House nixed a constitutional ban on same-sex marriage in February, and Indiana Republicans killed a similar measure shortly thereafter. In March, conservatives tried to bring a marriage amendment to the floor in West Virginia, but were trounced, 67-to-30.

In Minnesota, a perennial attempt to preempt gay marriage was postponed until session’s end before finally fizzling. Amy Johnson of OutFront Minnesota sees this as a sign that the bigots are losing traction. “I just don’t think their message resonates with people,” she says. “These families exist, and people are figuring it out.”

Polls numbers bear this out. Well over half of Montanans say they support anti-discrimination laws; in Utah and Indiana it’s about 70 percent and 80 percent, respectively. Even in states that have seen bruising campaigns against same-sex marriage, a growing number of people have apparently made peace with some level of equality. “Pretty much across the board, the responses were incredible,” says Travis McAdam of the Montana Human Rights Network. “When you tell them how the law is currently drafted, people say, ‘Well, that’s not right, how can that be legal?'”

It’s hard to say exactly when these sentiments will translate into law, for while conservative voters may believe in fairness, their elected leaders usually proceed with trepidation. “In the Midwest, I think the people, the voters, have changed more rapidly than the legislators,” notes Indiana Equality‘s Kathy Sarris. “But legislators are beginning to notice.”

That’s part of the reason state-level activists are now openly optimistic about their near-term prospects. Lynne Bowman of Equality Ohio, for instance, predicts that her state’s Equal Housing and Employment Act will finally pass this session, and Carlson has high hopes that Wisconsin will become the second Midwestern state to recognize same-sex relationships. “The walls are coming down faster and faster,” he says. “I think we’ll get our domestic partnerships.”

Virtually every state-level activist I spoke with says Iowa has helped matters along considerably. “People in Wisconsin relate to people in Iowa better than people in California, Vermont, or Massachusetts,” explains Carlson, who sees same-sex marriage spreading across the Midwest within five to ten years. Bowman and Sarris also predict a domino effect with more and more states acknowledging gay relationships. “I would predict that Illinois will have civil unions very quickly,” Sarris says. Minnesota’s Amy Johnson envisions “a three- to five-year horizon” for marriage legislation in her state, where activists’ efforts have been waylaid by Republican governor Tim Pawlenty’s vow to veto anything resembling a step toward same-sex marriage.

While they would welcome help from the national gay-rights crowd, the state-level folks have no intention of ceding control. “I think they can help on some of the language framing and the arguments,” Fiebiger says, “but so much of this is based on long-standing values that differ from other parts of the country…I think the local folks have a better handle on that piece.”

What they do need is money, especially in states with small gay populations. But historically, national groups have been reluctant to open their wallets unless a bill is close to passage. This, state-level activists say, makes it hard for them to do the grunt work needed to secure those long-term victories.

They would also welcome national help to elect more Democrats at the state level. The latest votes on gay rights in Montana, Utah, and West Virginia were split along party lines, and leaders in Minnesota and Wisconsin stress that their outlook has improved dramatically since the Dems took power.

In Wisconsin, bigotry itself helped facilitate the power shift. “I think under Karl Rove, the Republican Party decided that this was going to be a really good wedge issue for them—and it actually was, for a few years,” notes Carlson. The turning point, he says, came in 2006, when anti-gay campaigning backfired on state Republicans, likely costing them control of the statehouse. “Not to sound like it’s the school yard,” Carlson quips, “but they started it.”

Ryan Thoreson, a Rhodes scholar, studies social anthropology at Oxford University. His work has appeared in the Advocate, the American Prospect, and the Nation.