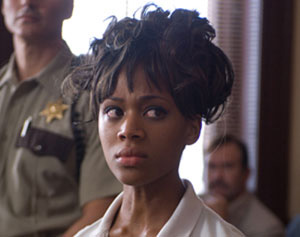 In a homespun start to the movie American Violet, Dee Roberts (the exceptional Nicole Beharie), a young mother of four, lovingly waters her potted violets. Before the roots have drunk their share, a police task force has swooped into Dee’s housing project in Melody, TX, and conducted a military-style raid. Dee’s daughter, caught in the eye of the storm, holds her grandmother’s heirloom pottery in the parking lot. There are gunmen on all sides. She is saved; the dish breaks. This overwrought metaphor of family ruin is realized when Dee is then arrested at the diner where she works, charged with distributing narcotics in a school zone.

Once in jail, Dee is assigned to a court-appointed lawyer who, the film suggests, is really there to represent the local DA’s interests in furthering prosecutions. Claiming that the police have incriminating audio tapes, the lawyer urges Dee to accept a plea bargain that would spring her from jail. But Dee will have none of it. Innocent, she’d rather wait it out in jail than accept a guilty plea that would label her a felon and deny her future government assistance. Who will win, Dee or the slimy DA? Is the answer a surprise?

American Violet is based on real events of 2000, when a small town DA in Texas systemically made blacks in public housing a target of aggressive drug raids. With the help of a local attorney, the ACLU successfully sued the DA for racial discrimination and for using the testimony of only one informant to indict countless individuals.

In screenwriter Bill Haney’s didactic retelling, the DA and his quarry are treated as tools to argue against racial injustice and a troubled plea bargaining system. There is not much room left for nuance or complexity. Dee’s mother (Alfre Woodard) is simple and solid, timid in action but loud of voice. The local attorney (Will Patton) is a good guy, but may have enabled racists in the past. The lead ACLU attorney (Tim Blake Nelson) is a skinny, pointy-headed New Yorker, with all that entails, even though he is actually a Southerner himself. (At the San Francisco screening, Haney explained this away, stating that he needed “a real fish out of water story”). The DA, Calvin Beckett (Michael O’Keefe) flames with racism and good ol’ boy meanness, reminding me of that other infamous Texas legal figure, the Judge from Cormac McCarthy’s Blood Meridian. You sense that Haney would have shown the DA molesting a young boy in a backwoods outhouse if he could have gotten away with it.

Black and white, right and wrong, good and evil: These are also the truisms by which George W. Bush governed. We see the man on flickering TV screens in the aftermath of the Supreme Court decision that unleashed eight years of government abuses. The filmmakers want to help remind you what injustice is, in case you forgot.

American Violet doesn’t pretend to be more than a liberal message movie, but wonderful acting, especially Beharie’s, bubbles over the common stock of flat characters and generic plot twists that can give it the sensibility of an elevated after-school special. The message alone is enough to earn attention: That the federal War on Drugs has promulgated a system in which drug task forces create terror; that counties have an incentive to seek plea bargains, since federal money is distributed to the counties that convict the most; and perhaps most importantly, that innocent people plead guilty across the country every day to avoid the prospect of extended incarceration.