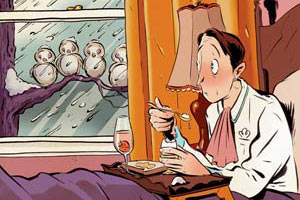 I’M A SELFISH BASTARD. At least, I’ve been feeling like one ever since I picked up Peter Singer’s new book, The Life You Can Save: Acting Now to End World Poverty. In it, the Princeton philosophy prof directly challenges the notion—popularized by all those late-night Sally Struthers Save the Children ads—that helping others is as cheap and easy as giving up your daily latte. Sponsoring a kid doesn’t cut it, Singer says; instead, he wants us to pony up and save as many lives as possible, disposable income be damned.

For Singer, this is a simple matter of arithmetic: Every day, 25,000 children under five die from sickness, hunger, and other preventable causes. Ending these deaths is a matter of money. (And not a lot, in the scheme of things. The UN seeks to halve extreme poverty and hunger by 2015—saving 30 million kids in the process—with no more than $189 billion a year. That’s less than what taxpayers have given to AIG and Citigroup alone.) As an American, you have more money than you really need. So get out your checkbook.

Singer, a utilitarian best known for his groundbreaking advocacy of animal rights and controversial pro-euthanasia stance, walks the talk. Since the early 1970s, he has given away an increasing share of his income to aid groups like Oxfam; he’s now up to 25 percent. He’d like to see everyone in wealthy countries do the same, ideally to the point where they can give no more without harming themselves or neglecting their families. To define this financial pain threshold, he lays out a sliding scale by which most Americans would pledge 5 percent—and as much as 33 percent if they’re superrich—of their yearly income to combat poverty.

He’s right: I should—and could—give away a lot more money without giving up my cozy lifestyle. But seeing as I’ve got two kids, retirement funds in free fall, and a job in a field that feels like the buggy-whip industry circa 1910, I’m a bit wary of taking too much stuffing out of my financial cushion. Can I get back to you in a couple of years when this whole economy thing blows over?

It’s easy to find such excuses for being a tightwad. Take the first family, which in 2006 donated 6 percent of its $984,000 income to various causes. Not bad, considering that the average American household gives away around 2 percent of its income. Yet in the early 2000s, the Obamas gave away less than 1 percent, because, as a flack later explained, “as new parents who were paying off their large student loans,” they had been “as generous as they could be at the time.” The economic meltdown has only heightened our conflicted attitude toward generosity: We now have the perfect excuse to hoard our hard-earned cash—and yet there have never been more compelling reasons to be generous.

“It’s always a good time to give more money away,” says Karen Pittelman, who’s written two books encouraging young donors to put their money where their mouth is. (She gave away all of her $3.3 million trust fund to start a nonprofit for poor women when she was 24.) The current economic situation, she says, “intensifies the need of everyone around you”—and the need to pitch in. “Understanding yourself as a part of a community at a moment like this is essential. Otherwise, we’re all going to hole up in our separate little cubicles and panic.”

President Obama has hailed volunteerism as an important way to help our fellow Americans. But let’s be honest: We’re not going to tutor and Big Brother our way out of this mess. It’s going to take some serious cash to plug the gaping holes in our social safety net. Organizations on the front lines of poverty, health care, and education are already hurting. Then consider that nonprofits provided nearly 10 percent of the nation’s jobs and brought in 5 percent of its GDP in 2006 (just edging out construction), and it becomes evident that bailing out the do-gooders isn’t just an ethical priority but a financial one: Altruism is too big to fail.

History suggests that we will pitch in—eventually. The Giving USA Foundation found that while giving has slowed during economic downturns, it has been growing steadily since the late 1960s. And while charitable donations dropped 22 percent in the first years of the Great Depression, they surged in the late 1930s and early 1940s.

Singer’s 5 percent solution illuminates one of the more mundane reasons why we don’t give more, and suggests an easy way to keep on giving—and possibly be even more generous—in uncertain times. Many of us express our good intentions in a flurry of year-end check writing or by whipping out credit cards when a tsunami or an earthquake strikes. Were we to commit ourselves to giving away a certain percentage of our incomes and budget it as an ongoing expense like any other, generosity might not be a guilt-ridden afterthought.

Pittelman stresses that ordinary folks shouldn’t feel bad for not donating more than they think they can reasonably afford. “I don’t think you can do such a great job working for social justice if you don’t have a roof over your head or health insurance,” she explains. Even Singer quietly adds some wiggle room in his call for sacrifice. While he used to insist that a family earning $50,000 should give away $20,000, he’s now willing to cut anyone who earns less than $100,000 some slack. Phew. I can contribute to my favorite NGOs and my kids’ college fund with a clear conscience.

In the end, Singer is adamant that the deeper your pockets, the bigger your debt to society. The superrich have taken a hit recently; now they’re just slightly less wealthy. Fortunately, some of them understand that the illusory gains of the past few years haven’t diminished their responsibilities. Bill Gates’ foundation plans to increase its giving even though its endowment has shrunk by 20 percent. “The wealthy have a responsibility to invest in addressing inequity,” Gates recently wrote. “This is especially true when the constraints on others are so great.”

Plus, if you’re sitting on a fortune, munificence may be a smart PR move. As Matthew Bishop, coauthor of Philanthrocapitalism: How the Rich Can Save the World, told Philanthropy News Digest, the superwealthy should publicly give away more of their wealth lest they be branded “robber barons”—or, perhaps, selfish bastards.