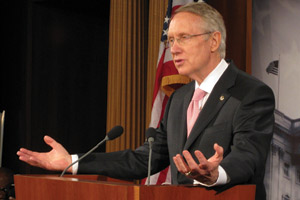 On Tuesday—after Democrats joined with Republicans in the Senate to vote against President Obama’s request for $80 million to close the Guantanamo Bay prison—Senate Majority Leader Harry Reid (D-Nev.) told reporters that he didn’t want terrorist suspects in US prisons. Yet in the midst of scoring—or deflecting—a political point, Reid apparently forgot a basic fact: there are dozens of terrorists in US jails.

Senate Democrats, including Reid, moved to strip the Gitmo shutdown money after the Republicans initiated a scare campaign, warning that the worst will happen if Obama transfers Gitmo detainees to federal prison facilities in the United States. Looking for a winning political issue, Republican House members and senators have been sending letters to Obama and declaring, “Not in my state.” Though Reid’s home state of Nevada has no federal prisons, he joined this chorus, saying: “Part of what we don’t want is [terrorists] be put in prisons in the United States. We don’t want them around the United States.”

But there already are dozens, if not scores, of terrorists in US prisons. Since 9/11, according to Human Rights Watch, federal courts have tried 145 people on terrorism charges. Those found guilty are in US jails. And it’s no secret that a number of prominent terrorists—including key figures connected to al Qaeda—have been sent to high security federal prisons. Here’s a sampling:

* Omar Ahmad-Rahman, a.k.a. the Blind Sheikh, who was convicted for masterminding the 1993 World Trade Center attack, is in the Butner Federal Correctional Complex in North Carolina.

* Richard Reid, the failed shoe-bomber terrorist, is in the supermax federal prison in Florence, Colorado.

* Ramzi Yousef, one of the planners of the 1993 WTC bombing and a nephew of 9/11 plotter Khalid Shaikh Mohammed, is in Florence.

* Jose Padilla, accused of plotting a dirty bomb attack (before those particular charges were dropped), is in Florence.

* Zacarias Moussaoui, dubbed the “20th hijacker,” is in Florence.

* Ahmed Ressam, who planned to bomb Los Angeles International Airport, is in Florence.

* Mohamed al-Owhali, Khalfan Khamis Mohamed, Mohamed Odeh, and Wadih el Hage—each convicted for the bombings of the US embassies in Tanzania and Kenya in 1998—are in Florence.

The United States does have the ability to lock up terrorists. And none of these bad guys have been able to escape and terrorize the communities surrounding these federal jails. (Thirteen members of the ring behind the 2000 bombing of the USS Cole were imprisoned in Yemen, but they managed to escape; most remain at large.) Adding some or all of the 240 detainees now in Gitmo would certainly pose challenges to federal prison authorities. But the system has worked. Officials Hardin, Montana, have even expressed interest in taking the Gitmo prisoners to fill the town’s detention facility, which has been sitting vacant since completion in 2007.

Republicans, eager for any political ammo, are trying to turn Gitmo into a NIMBY issue. And they have at least succeeded in frightening Reid and his fellow Senate Democrats—to such an extent that Reid ended up echoing their demagogic talking points. (A senior Democratic Senate aide says that Reid did try to “walk back the comments a bit.”) “At this time, [Reid] opposes transferring detainees to American prisons,” a Reid spokesperson says. “If the administration proposes a plan that recommends the transfer of some detainees to Americans prisons, he will evaluate it carefully and make a judgment at that time. He will always strongly oppose the release of any terrorists onto American streets.”

On Thursday, Obama is scheduled to deliver a speech outlining his plan for closing down Gitmo—in an effort to regain support for the funding request he submitted to Congress. He will, no doubt, appeal to reason and make a calm and deliberate case to back up his position. And, no doubt, the Republicans will try to blast him for shuttering Gitmo and possibly sending nasty terrorists into the American heartland. It would be good for the Obama White House if during this round Reid doesn’t give aid and comfort to fear-mongering GOPers.