1869 Prohibition Party founded. Central goals include women’s suffrage and freeing the working class from the evils of drink.

1987 As Carlos Salinas runs for president of Mexico, his brother Raul begins working for the cartels.

1987 Partnership for a Drug-Free America launches “This is your brain on drugs” ad. 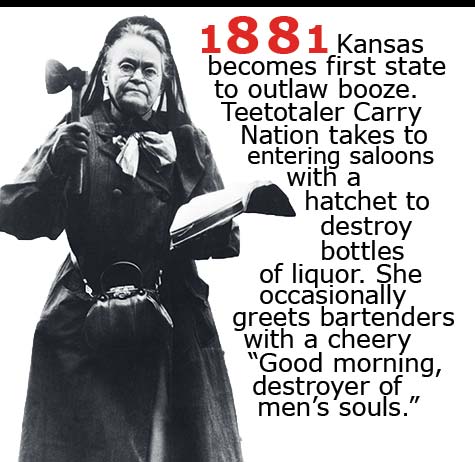 1912 Twelve countries sign First International Opium Convention, agreeing to “use their best endeavors” to clamp down on “morphine, cocaine, and their respective salts.”

1929 Montana outlaws pot because, as one doctor explains, “When some beet field peon takes a few traces of this stuff…he thinks he has just been elected president of Mexico, so he starts out to execute all his political enemies.”

1936 Church group finances Tell Your Children, a film about the manslaughter, suicide, rape, and insanity that ensue when kids try pot. Bought by exploitation film producer, who renames it Reefer Madness.

1950s FBN chief Anslinger provides Sen. Joe McCarthy morphine for fear that exposing his addiction would put country at risk. “On the day he died,” Anslinger later writes, “I thanked God for relieving me of my burden.”

1967 The BBC refuses to play the Beatles’ “Lucy in the Sky With Diamonds,” because of the apparent reference to LSD. John Lennon maintains the song was inspired by a picture drawn by his son Julian.

Sept 1969 To combat marijuana imports, US launches Operation Intercept, searching all traffic along the Mexican border for 3 weeks and costing both countries millions.

Oct 27, 1970 The Comprehensive Drug Abuse Prevention and Control Act reduces penalties for marijuana possession. Also allows police to conduct “no-knock” searches and establishes five “schedules” of drugs based on their medicinal value and potential for addiction.

Sept 5, 1989 President George H.W. Bush unveils anti-drug program by holding up 3 ounces of crack purchased by DEA agents “in a park across the street from the White House.” It is later revealed that agents entrapped the dealer—a high school student.

Nov 1991 While trying to stop a coke shipment, Mexican federales are killed by Mexican soldiers in the pay of Colombian cartels. One general imprisoned, then quietly released.

1996 Gary Webb publishes “Dark Alliance” series in the San Jose Mercury News accusing CIA of helping contras smuggle cocaine into the US during the 1980s. Webb is discredited by media, is demoted, resigns, and commits suicide in 2004. Internal CIA probe ultimately corroborates many of Webb’s claims.

1997 Sen. Jesse Helms (R-N.C.) blocks the nomination of Massachusetts governor William Weld as ambassador to Mexico, saying that the Republican’s support for medical marijuana and needle exchange programs makes him unfit to serve.

1997 C.R.A.C.K. (Children Requiring a Caring Kommunity), a California nonprofit, offers $200 to any drug-addicted woman who agrees to be sterilized or get birth-control implants. Founder Barbara Harris explains, “We don’t allow dogs to breed…We try to keep them from having unwanted puppies, and yet these women are literally having litters of children.”

1998 Congress requires drug czar to oppose legalization of drugs and any research on legalization. 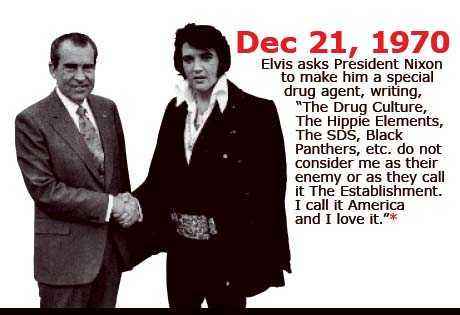 June 17, 1971 Borrowing language from LBJ’s War on Poverty, Richard Nixon declares War on Drugs, calling narcotics “public enemy No. 1.” For the only time during the War on Drugs, the majority of funding goes toward treatment.

1972 US and French law enforcement bust the “French Connection,” a smuggling operation controlled by Corsican gangsters and the Mafia, resulting in a heroin shortage on the East Coast.

March 1972 Nixon-ordered Shafer Commission recommends decriminalization, finding that “neither the marihuana user nor the drug itself can be said to constitute a danger to public safety.” Nixon ignores the report.

May 30, 1977 Newsweek reports, “Among hostesses in the smart sets of Los Angeles and New York, a little cocaine, like Dom Pérignon and Beluga caviar, is now de rigueur at dinners.” The article cautions that cocaine can be dangerous but “a number of researchers have concluded that it can be safer than liquor and cigarettes when used discriminately.”

1978 Medellín cartel cofounder Carlos Lehder buys a 165-acre island in the Bahamas, which is used as refueling spot for planes flying drugs from Colombia to the United States until 1983.

1983 Drug Abuse Resistance Education (DARE), a program in which police officers talk to kids about drug use, is founded in Los Angeles.

Nov 6, 1984 The DEA and Mexican agents raid five marijuana farms in the Chihuahua desert and seize 9,000 tons of marijuana worth an estimated $4 billion. US officials declare the event the “Bust of the Century.” The previous bust record was 570 tons.

Jan 29, 2002 Noelle Bush, daughter of Florida governor Jeb Bush and niece of President Bush, is arrested for forging a Xanax prescription. During her court-ordered rehab, she is found with two grams of cocaine and is sentenced to 10 days in jail.

Feb 3, 2002 ONDCP spends $3.4 million on Super Bowl ads warning, “Where do terrorists get their money? If you buy drugs, some of it might come from you.”

Nov 5, 2002 Nelson Rockefeller’s granddaughter, Meile, is arrested for protesting the harshness of the Rockefeller Drug Laws in front of the New York governor’s office.

2003 80% of US school districts now have much-touted DARE programs. GAO finds “no significant differences in illicit drug use between students who received DARE…and students who did not.”

Feb 25, 2004 Thirty leading doctors and scientists issue a letter asking the press to stop using the term “crack baby.” “None of us,” the researchers explain, “has identified a recognizable condition, syndrome or disorder that should be termed ‘crack baby.'” One of the signatories is Dr. Ira Chasnoff.

Jan 2006 Authorities announce the discovery of a half-mile-long tunnel linking a warehouse in Tijuana to a warehouse in the United States where 200 pounds of marijuana were found.

March 2007 The Lancet reports that as far as drug prohibition goes, “the exclusion of alcohol and tobacco…is, from a scientific perspective, arbitrary.”

2008 An ad by the Partnership for a Drug-Free America advises parents to talk to their kids about drug use, but notes that there is “no need to reveal you smoked marijuana 132 times.”

Jan 2009 NY gov. David Paterson says, “I can’t think of a criminal justice strategy that has been more unsuccessful than the Rockefeller drug laws.”

Feb 1985 DEA agent Enrique Camarena is kidnapped and murdered in Mexico. The Mexicans’ lack of cooperation leads US to launch a crackdown on the Mexican border. Camarena’s body is found within a month, as is evidence of Mexican cover-up.

1986 Reagan signs National Security Directive No. 221, expressing concern over narcostates, “where a combination of international criminal trafficking organizations, rural insurgents, and urban terrorists can undermine the stability of the local government.”

May 13, 2009 Drug Czar Gil Kerlikowske says he wants to banish term “War on Drugs” and favor treatment over incarceration to reduce illicit drug use.

2009 40% of the 288,000 Americans admitted to rehab for marijuana use have not used the drug in the month prior to their admission. Roughly 2/3 are there as part of a deal to avoid jail time.

The Altered States of America: Sources

1929: “The Forbidden Fruit and the Tree of Knowledge: An Inquiry Into the Legal History of American Marijuana Prohibition,” Virginia Law Review, October 1970

1983: YouTube video of Nancy Reagan in the episode “The Reporter“

1988: Snitch: Informants, Cooperators and the Corruption of Justice, Ethan Brown, 2007; “What Is Addiction, and How Can We Treat It?,” PBS Frontline

1994: “The estimated number of arrests for drug abuse violations for adults has been increasing,” Bureau of Justice Statistics; “The War on Drugs – A Peace Proposal,” L. Grinspoon and J. B. Bakalar, New England Journal of Medicine, February 3, 1994