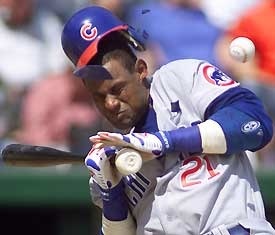 The exposé of Sammy Sosa’s past steroid use hasn’t surprised much of anybody. I lived a few blocks from Wrigley in Chicago during the magical 1998 season and even as a middle schooler I could sense that something was amiss. After Big Mac, BALCO, Clemens, congressional interventions, A-Rod, and Manny, fans and the sports press don’t have the energy left to go through the outrage motions with Slammin’ Sammy. In Robert Lipsyte’s excellent overview of recent sports books he suggests that the sports media take a new approach towards the steroids story:

Meanwhile, it feels like the pin-striped suits are slinking away without the media-mauling they deserve, much less real punishment. Maybe this is the chance for the sports media to make a comeback, avenge the loss, win one when it counts. While it might be hard to mount a war crimes charge against George W. Bush, what about a steroids trial? After all, he was managing partner of the Texas Rangers in the early 1990s when Jose Conseco, the guru and snitch of performance enhancing drugs, played for him and began sharing his needle.

Funny that Lipsyte should mention Bush’s former ownership of the Texas Rangers on the day the Sosa steroids news broke. During the 2000 Republican primaries the candidates were asked what they considered their biggest mistake and Bush somewhat famously answered that his had been to sign off on the 1989 trade of Sammy Sosa from the Texas Rangers to the Chicago White Sox. It was a dumb answer—he did, of course, have a DUI—but it was innocuous enough and may have endeared him to baseball-loving Americans. The 2000 elections, after all, fell right during the height of the Steroid Era; a time when balls were flying out of ballparks, and the game was enjoying an incredible surge in popularity. So while Bush’s trade of Sosa looked particularly stupid in 2000, when Sammy was in the midst of a 4-year stretch where he hit an insane 243 homers, a decade of steroid scandals later (including Sammy’s own day of reckoning) the trade doesn’t look any better.

Why? Because, to owners throughout the majors, the Steroid Era was worth the largely player-focused ignominy that followed. The game enjoys a popularity and profitability today that it never would have without the enhanced exploits of Sammy and Mark McGwire in 1998, Barry Bonds to follow, and so on.

This is precisely Lipsyte’s point: owners haven’t suffered any consequences for their role in the Steroid Era (other than temporarily losing the services of players suspended for juicing). Steroid use is a stain that falls solely on the players (even as they feel the physical after-effects on their bodies), while the real moneyed interests continue to get off scot-free.