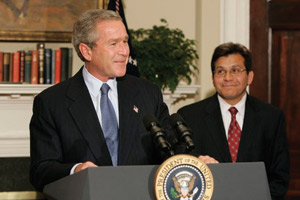 Will former US Attorney General Alberto Gonzales and other senior Bush administration officials end up in jail for crafting the policies that led to the torture of prisoners at Guantánamo? As of yet, no government prosecutor is targeting them in the United States. But thousands of miles away, Spanish attorney Gonzalo Boyé is chasing after Gonzales and five other lawyers, and he has a chance—perhaps not a large one—of convincing his country’s legal system to charge these former Bush aides with human rights violations.

For more than a decade, Spanish courts have been the terror of torturers and genocidaires the world over. Operating under the principle of “universal jurisdiction,” the country has claimed the right to investigate and, if necessary, prosecute human rights cases that occurred beyond its borders if the countries in question fail to act. Spain first invoked its status as the world’s court of last resort in 1998, when Judge Baltazar Garzón of the National Court in Madrid issued an arrest warrant for former Chilean dictator Augusto Pinochet for his regime’s torture and murder of Spanish citizens. Pinochet ultimately escaped prosecution in Spain, but Garzón’s move paved the way for more cases. Sixteen are currently moving through Spanish courts, targeting perpetrators from Israel, China, Guatemala, Argentina, and El Salvador, among other countries. Still, for all the shuffling of paper, Spain has produced only one conviction under the banner of universal jurisdiction: that of Adolfo Scilingo, an Argentinean convicted in 2005 of assassinating left-wing dissidents during the country’s “dirty war.”

The investigation is the handiwork of Boyé, a human rights lawyer who represents several former Guantánamo detainees. According to their criminal complaint, they allege that the Bush Six “participated actively and decisively in the creation, approval and execution of a judicial framework that allowed for the deprivation of fundamental rights to a large number of prisoners,” and legitimized “the implementation of new interrogation techniques including torture.”  In March, Garzón took up Boyé’s case and initiated an official investigation; another National Court judge, Ismail Moreno, has since taken over the matter. Theoretically, assuming investigators gather sufficient evidence, indictments and prosecutions could follow, though it’s unlikely that any of the Bush administration lawyers would choose to show up in Spain for a trial.

Boyé himself is no stranger to terrorism cases. He spent eight years in a Spanish prison for his involvement in the 1988 kidnapping of businessman Emiliano Revilla, who was held hostage for eight months by members of ETA, a Basque separatist group that appears on the US State Department’s list of international terrorist organizations. Boyé claims to only have lent the kidnappers his ID and characterizes his incarceration as the result of “a very unfair trial.”

Now, Boyé has become something of a de facto prosecutor. But a recent resolution passed by the Spanish parliament could undermine his case. Spain’s two leading political parties—the Socialists and the People’s Party—overwhelmingly passed a measure on May 19 calling for a law that would restrict the use of universal jurisdiction. Will the measure quash the Bush Six investigation? Mother Jones discussed the case with Boyé.

Mother Jones: How was it that you came to be involved with the Bush Six case?

Gonzalo Boyé: I was concerned about the situation in Guantanamo and was searching for more information about it. Then I found several books, including The Torture Team by Philippe Sands. Reading it, I was sure that the key problem was the lawyers. The lawyers who created the legal framework for Guantanamo are the basis for all that happened there. Without the lawyers, the crime would never have been committed, or at least not in that form and with such a degree of impunity.

MJ: What are you hoping to accomplish?

GB: To get a conviction against the people responsible for what happened in Guantánamo. Accountability is the first step toward deterrence. With criminal offenses like this, it is necessary to send a clear message: No one is above the law, no matter their intentions. The security of any country can only exist within the rule of law. The war on terror is no exception. Thanks to Guantánamo, no evidence obtained there can be used in any court of law. Bush and his advisers have done a great favor for Islamic terrorists.

MJ: Are there any legal precedents for what you are attempting to do?

GB: Yes, at the Nuremberg trials several lawyers and judges were convicted for actions similar to those of the Bush Six. And in other countries, legal advisers and physicians have been convicted for taking part in torture. I do not see any reason why this case should be different.

MJ: A similar case in Germany against the Bush administration failed. Why? And what do you plan to do differently in order to optimize your chances of success?

GB: Because in Germany only the state prosecutor can exercise criminal action. In Spain, victims and civil society can do so themselves. There is no political control over what can go to court. According to the Spanish constitution, anyone can file criminal charges. That is the main difference between Spain and any other legal system in which universal jurisdiction is recognized.

MJ: What would you characterize as success in this case? Indictments?

GB: We are seeking more than just indictments. These people will be convicted, either in Spain or in the United States. I would prefer that the trial take place in North America, as that would be the best example of a legal system working for everyone.

MJ: The Spanish parliament passed a draft law on May 19, setting additional restrictions on universal jurisdiction cases like yours, presumably with the intent of making them more difficult to file. How might the new law affect the Bush Six case? Does it target your investigation specifically?

GB: The Spanish parliament is in the process of approving new regulations, but that will have no effect on this case. We represent Spanish victims, so there is sufficient relevance to Spain for the case to go forward. The new regulations are being devised in order to obtain impunity for the Chinese and Israeli authorities involved in other universal jurisdiction cases. They will not apply to people involved in torture committed at Guantánamo. In the Bush Six case, we fulfill all the new requirements of the draft law, so there is no reason for the Bush Six to relax or celebrate.

MJ: How likely is it that this draft law will pass? When do you expect it will?

GB: The law will be passed without a doubt, as it is in the interest of both major political parties. For the first time in several years, they are in agreement on something. They want to grant impunity to people who have committed the most serious criminal offences as defined under international treaties. Sooner than later, the government will regret changing the law and its collaboration with the opposition. The draft law would never have been written without political pressure exerted by both Israel and China.

MJ: Why do you think both major parties in Spain are so eager to weaken universal jurisdiction?

GB: They are bending to pressure from abroad. Politicians never considered changing the law until we brought criminal cases against some Israeli and Chinese officials. At the end of the day, the new draft law was not planned in Madrid, but in Tel Aviv and Beijing. Instead of keeping a dignified and independent position, Spanish politicians are running to meet the demands of these two foreign governments. Spain does not have a long-standing democratic culture, so it feels the need to be friendly with everyone rather than only those countries that respect human rights. In cases like this, a middle-of-the-road position is unacceptable: Either you are with the victims, or you are with the perpetrators. Spain was to play a major role in a peaceful solution to the Israeli-Palestinian problem, but with decisions like this, its position will become unacceptable to the Palestinian side. Politicians have a double standard when it comes to these types of crimes. That is quite evident.

MJ: How far along is the investigation? Have you requested that Judge Moreno call any witnesses? Gather any documents?

GB: We have requested a lot of documents and are waiting for US authorities to respond. We have presented some expert reports to the court. The next step will be to call witnesses.

MJ: Do you intend to urge the court to call members of the Bush Six to testify?

GB: Yes, all of them will be called as defendants. They are people responsible for serious criminal offences. We will guarantee them due process, as that is the only way to achieve proper justice.