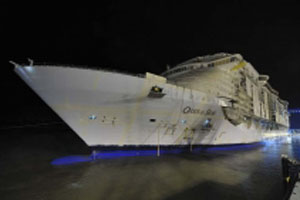 The June issue of the Atlantic has a look at the mind-blowing Oasis of the Seas, a gargantuan ocean liner forthcoming from cruise company Royal Caribbean International. Its unprecedented scale of apparent luxury surely required feats of engineering. But any awe that inspires would seem to wash away with apprehension of the ship’s untold economic and ecological hubris.

A decade ago, a large cruise ship typically carried in the neighborhood of 2,000 passengers and 1,000 crew members. But in an industry intently focused on swelling its profits no matter the non-fiscal costs, bigger is always better. Ordered in 2006 for $1.4 billion (on the crest ahead of the economic meltdown), the Oasis leaves those old numbers far in its wake. “In November,” writes Rory Nugent, “Royal Caribbean will take delivery of a true sea monster. Now in its final phase of construction, the Oasis of the Seas will be the biggest (longest, tallest, widest, heaviest) passenger ship ever built—and the most expensive. It will dwarf Nimitz-class aircraft carriers and cast shadows dockside atop 20-story buildings. A crew of 2,165 will tend the expectations of up to 6,296 passengers.”

According to the Atlantic, the ship has 21 swimming pools onboard, circulating more than 600,000 gallons of water. Passengers are expected to consume another 560,000 gallons per day, including daily production of 110,230 pounds of ice cubes—more than the weight of nine adult male elephants. The Oasis will also function as “its own utility company” with a 100-megawatt electrical grid—which will consume 12 tons of diesel fuel per hour and generate enough juice to power 105,000 homes.

There is a 1,380-seat playhouse onboard, though it’s not even the main attraction. That would be the outdoor “AquaTheater,” which apparently is “wrapped in its own wind-shielded microclimate” and uses nearly 2,000 nozzles to spray water in concert with a Las Vegas-style light show.

A good many people enjoy this kind of thing, the decadent vacation cruise. (Enough of them to support an industry with annual revenues in the tens of billions of dollars.) Based on the intuition that the experience might feel a bit like feasting on a nine-course meal in the middle of an Ethiopian refugee camp, I’ve never had any intention of trying it. David Foster Wallace famously once did. It’s a safe bet that the Oasis of the Seas would have left him royally retching. (His great essay “A Supposedly Fun Thing I’ll Never Do Again,” originally published in Harper’s in 1996 as “Shipping Out,” was made available online by the magazine after his tragic death last fall.)

From Florida to Alaska, the consumptive ships of Royal Caribbean have been in the news before. Seven years ago federal investigators determined that the cruise company had covered up massive environmental malfeasance, despite a case focusing on one of its ships, the Norway, that resolved with a $1 million slap on the wrist. As USA Today reported in November 2002:

Now, some of the federal agents who investigated the case say the company’s pollution went on for much longer and was much worse than the light fine suggests. Environmental Protection Agency agents say—and court records support—that the Norway not only poured hundreds of thousands of gallons of oily bilge water into the ocean. It also dumped raw sewage mixed with hazardous, even cancer-causing, chemicals from dry cleaning and photo development into the waters near Miami for many years.

In the late 1990s, according to that USA Today report, Royal Caribbean had eventually pleaded guilty to 30 criminal charges in Miami, New York, Puerto Rico, Los Angeles, the Virgin Islands and Alaska, and had paid $27 million in fines in 1998 and ‘99. By the 2002 news report, it had “implemented a companywide environmental compliance program.”

About to embark with its new mega-ship, has it since cleaned up its act? A year ago this week, a Royal Caribbean cruise ship dumped 20,000 gallons of contaminated water just off the coast of Southeast Alaska.

Mark Follman is a journalist based in San Francisco. You can read more of his writing about current affairs and culture at markfollman.com.