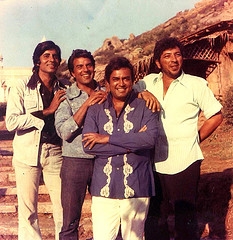 Hindi cinema, long dismissed by the West as melodrama with a soundtrack, is the largest film industry (by volume and global popularity) in the world. Those so inclined can laugh, cry, and swoon their way through three hours of lush scenery, arch comedy, and catchy music in theaters across Africa, Asia, the Middle East and the former Soviet Bloc, not to mention Canada, the UK, and the borough of Queens.

So why have so few Americans ever seen a Bollywood movie? If you’re daunted by the prospect of sorting through 900 films per annum, consider this your beginner’s guide to Bollywood.

Below, a 5-video cheat sheet of what to see first.

1) Chak De! India (2007): Chak De is Punjabi for “go for it,” and this 2007 movie about the Indian National women’s hockey team certainly has that spirit.

Synopsis: Once-great men’s field hockey coach Gabbir Khan (Shah Rukh Khan) is determined to turn a rag-tag group of girls from all over India into a World Cup winning team. But language, class and communities divide them, and besides, who cares about a women’s league? As feminist a film as you’re likely to find, and a lot of fun.

Bonus: Nothing beats girls beating boys, except possibly the movie’s title song. Chak De! was, for awhile, literally the catchiest tune in the world.

Synopsis: In this picture (scored by the epicly talented A.R. Rahman more than a decade before he won an Oscar and showed up in that video with the Pussycat Dolls), Shah Rukh Khan plays a reporter for All-India Radio sent to investigate attitudes about India’s independence in a troubled region of the country. There, he meets Meghna (Manisha Koirala), a strange but beautiful enigma. And, it turns out, a terrorist. Priti Zinta also plays Khan’s fiance.

Bonus: The score. The song Chaiya Chaiya (below) is one of the most memorable (and stolen) of the decade. And yes, they’re really dancing on a moving train.

3) Sholay (1975): They call this a Curry Western. Take one part John Wayne, two parts bromance, stir in the subaltern heros of the 1970s and the star power of Amitabh Bachchan, and you have Sholay, the most watched Bollywood movie of all time.

Synopsis: Jay (Bachchan) and Veeru (Dharmendra) are a couple of small-time crooks whose cunning and moral uprightness win them a special place in the heart of Thakur Baldev Singh, a local lawman who wants revenge against a gangster so mean, his name is still synonomys with evil.

Bonus: It’s a tie, between Bollywood’s most evil villian, Gabar Singh, and the loveable buddiness of Jay and Veeru, who were bromancing thirty years before it was an MTV show.

Synopsis: Set half in the UK and half in Punjab, the romantic comedy tells the story of Raj (Shah Rukh Khan), a nogoodnik with a heart of gold who falls head over heels for Simran (Kajul) on a school trip across the Continent. When her father finds out he packs her off to Punjab to get hitched, but Raj can’t let go. What ensues has been played and replayed, danced and sung at every South Asian wedding since 1995.

Bonus: Khan and Kajul are the Richard Gere and Julia Roberts of India, and DDLJ is their Pretty Woman.

5) Deewar (1975): This is my favorite film, a throwback to a time when Hindi movies were political.

Synopsis: Deewar, which translates to “The Wall,” is the story of two brothers whose father, a union organizer, is forced to capitulate to the bosses after his family is kidnapped and held ransom against his signature. Disgraced, daddy jumps town leaving mom and the kids to fend for themselves on the mean streets of Bombay.  Older brother Vijay (Amitabh Bachchan) goes to work so that younger brother Ravi (Shashi Kapoor) can go to school. Flash forward and Ravi has distinguished himself as a cop and Vijay a feared gangster.

Bonus: Bollywood’s best line—”Mere pas Maa hai” As the movie winds towards its terrible climax, Vijay demands to know what Ravi has gained from his upright life as a police officer. “Look, look what I have, and look what you have. I have buildings, property, a bank balance, bungalows. And you, what do you have?” To which Ravi replies “I have Mother.”

Not enough? Let us hear your recommendations.