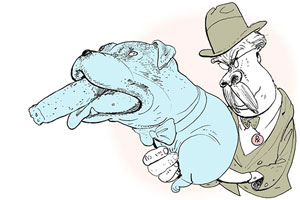 As the legislation moves through the Senate a consensus for watered-down health care reform starts to emerge: a plan that regulates the corporations some more, sparing them the inconvenience of the desperately needed Public Option. This turn of events didn’t come from the GOP, but from DEMOCRATS. Conservative Democrats, called Blue Dogs. But “conservative” is a misnomer here. These representatives are from the state of Corpo-predation. And as funny dogs, they insult the people and the government of the country to the tune of the big bucks of the industry that put them there. A laugh and a half.

PS: This from Democracy Now:

President Obama’s plan to overhaul the nation’s healthcare system and create a public insurance option has been dealt a possible setback in the Senate. A bipartisan group of six senators on the Senate Finance Committee has been working in secret for weeks to draft an alternative to Obama’s plan. The alternative legislation under consideration would not require businesses to offer healthcare coverage to their workers and would not contain a public insurance option, despite support for such an option from American voters. The Senate legislation was drafted during meetings in the office of Montana Democrat Max Baucus, the chair of the Senate Finance Committee. The senators crafting the legislation have received support in their secret efforts from the US Chamber of Commerce. Last month, the Montana Standard reported Max Baucus has received more campaign money from health and insurance industry interests than any other member of Congress. In the past six years, nearly one-fourth of every dime raised by Baucus and his political action committee has come from groups and individuals associated with drug companies, insurers, hospitals, medical supply firms, health service companies and other health professionals.

In related news, the National Journal reports twenty-two groups related to healthcare spent at least $1 million on lobbying during the second quarter. The Pharmaceutical Research and Manufacturers of America, or PhRMA, spent $6.2 million in lobbying expenditures. Pfizer spent $5.6 million, and the American Medical Association spent $3.9 million. Since 1998, the health sector has put $3.4 billion into lobbying efforts, ranking second only to the financial industry.

PPS: Check out this piece by Joanna Molloy in today’s Daily News:

My husband got the telltale bull’s-eye of the Lyme disease infection on his leg recently – but it’s the medical bill that bites.

We have to pay $297 for a “Lyme disease DNA test,” the bill reads, because the insurance company refused to pay the laboratory because the test is considered “experimental.”

Oh, and because on the same bill is the normal Lyme disease tick test at $49.50, which the company paid.

We wondered, did they have Dr. James Watson, co-discoverer of the double helix structure of genes, do the test himself?

Why was it so expensive, and did we really need to know what color eyes the tick had? We argued with the lab, and what do you know, there was a tick DNA sale going on that day; they dropped to 50 bucks.

For one short minute, we felt sorry for the health insurance conglomerates, as well as for the Blue Dog Democrats.

You know the Blue Dogs: They’re the conservative Democrats who are dragging their paws on President Obama’s wish to pass a law by September to give all Americans health insurance.

The Blue Dogs used to be called Yellow Dogs, because they were so loyal to the Democratic Party that they’d “vote for a yellow dog if it was on the ticket.” They changed to blue after feeling “choked blue” by the liberals.

The 52 Blue Dogs are linked to the Republicans. They want to “reduce the subsidies lower-income Americans will get,” The Wall Street Journal says.

As it is, medical bills cause half the personal bankruptcies in the U.S., even for people with health insurance. We called Alpha Blue Doggie Rep. Mike Ross of Arkansas to ask if he wants poor Americans to get less health care than rich Americans. He didn’t call back.

The Blue Dogs also want to know how we’re going to pay for insurance for the 46 million Americans, including 8 million children, who don’t have any.

Maybe their fear is fueled by the $508,000 their political action committee got from the health care sector – up 90% from two years before.

Oh, well, since Congress is going to recess before doing anything, lawmakers might want to come to New York and visit Dr. Daryl Isaacs, who has seen 23,000 patients at his SoHo practice in 30 years.

Unlike many of his colleagues, he still accepts health insurance, despite having gotten reimbursed as little as $3.98 for an office visit over the years.

Does he treat patients with no insurance?

Isaacs worries that if legislators “don’t do real reform” that reins in insurance companies and malpractice lawyers and keeps premiums down they will just be making a bigger salad.

“They must rein in the power of the insurance companies,” he said. “CEOs are getting millions, even a billion, in compensation. Yet you prescribe a drug, and they contact you and say why don’t you prescribe a cheaper drug. It’s apples and oranges.

“You ask them, do they cover physicals, but they really just want you to listen to the patients’ heart and lungs and take their blood pressure. They don’t want you to do blood tests for diabetes, cholesterol, kidney function, unless a patient is sick.

“Everybody in the U.S. should have a plastic card and every doctor, pharmacy, hospital, a machine like a credit card machine, you swipe the card, it gives medical records and pays the bill.

“In Florida some of the people go to different doctors and get the same test in one day. That’s why Medicare costs are so high. This would stop that. I would support a one-payer system.

“Radiologists are so afraid of getting a malpractice suit, they won’t say a test is ‘normal,’ so you have to order another MRI, another cat scan, a sonogram after a mammogram. One-third of the costs are extra tests.”

PPPS: Here’s the jaw-dropping interview by Jon Stewart with the wonderful Bill Kristol from last night. Billy admits the government provides the best health for patients…and that he doesn’t think we deserve it. This should be the clip Obama’s gang runs all day on TV: