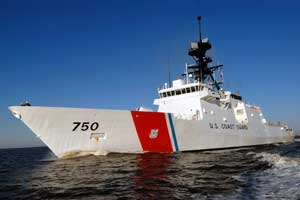 Last week, the Coast Guard kicked off construction of the 418-foot Stratton, engraving the initials M.O. into the ship’s keel in honor of Michelle Obama. The Stratton will be the third of eight so-called “National Security Cutters” that are set to be the crown jewels of the service’s revamped fleet. But the first lady may have lent her name to a flawed vessel, for critics of the new ships maintain that their communications systems are likely vulnerable to interception and that the Coast Guard’s entire modernization program is ridden with major problems.

The Project on Government Overight (POGO) and Michael DeKort, a former Lockheed Martin engineer, have been leading the charge against the new ships. In 2006, DeKort recorded a whistleblowing YouTube video that claimed the Coast Guard’s $25 billion, 25-year-long modernization effort to modify or replace nearly all of its ship and helicopters, known as Deepwater, was in trouble. Since then, DeKort, POGO, and members of Congress have criticized Northrop Grumman and Lockheed Martin, the two main Deepwater contractors, for alleged mistakes in building and refitting ships and equipment.

Before recording his YouTube video, DeKort contacted the Department of Homeland Security Inspector General’s office to request an investigation. An IG report (PDF) issued in February 2007 confirmed two of DeKort’s four claims about problems with Deepwater. The report explained how contractors had installed equipment that did not meet contractual requirements—topside electronics that weren’t weatherproofed, for example. So flawed was the work, the IG noted, that the contractors’ efforts to extend eight 110-foot ships to 123 feet resulted in hull deformation that made the ships essentially unusable. Congress held hearings, and the whole affair was a massive embarrassment for the Coast Guard and its contractors.

But DeKort wasn’t satisfied. He still thought some Deepwater electronic systems were vulnerable to eavesdropping. He also didn’t think the Coast Guard was doing enough to recover the money that had been wasted on the faulty work. In January, he filed suit (PDF) under seal against the contractors, citing the False Claims Act, which allows whistleblowers to sue on taxpayers’ behalf and get a fraction of the money themselves if they prevail.

In May, the DHS IG told the Coast Guard (PDF) that it could seek restitution totaling nearly $100 million from its contractors for their mistakes. But it still did not accept DeKort’s arguments about electronic security, and the $100 million wasn’t as much as DeKort thought the Coast Guard deserved.

DeKort went public with his suit in June. Last week, he slammed the DHS IG’s report for going easy on the contractors. In an interview, DeKort said that the DHS IG told him privately that they “completely blew” their determination on the electronic security standards and “got it wrong” but “they wouldn’t go back and change the record.” (The IG’s office does not generally comment on “other people’s comments,” a spokeswoman told Mother Jones.)

Lockheed Martin declined to comment on the NSC charges, too. But a spokesman said in an email that DeKort’s previous “allegations were repeatedly investigated by the Corporation including an investigation by the Corporation’s Vice President of Ethics & Business Conduct. These investigations each found Mr. DeKort’s allegations to be without merit and Lockheed Martin intends to vigorously defend” itself against DeKort’s lawsuit.

A Coast Guard spokesman said the service was “happy to take action” on the findings of the DHS IG report, but would not comment further.

“Congress just [sat] there and let the Coast Guard bullshit them,” DeKort says. Members of Congress might disagree with that, though. The House homeland security committee and the Senate commerce committee have both held hearings castigating Coast Guard officials for Deepwater’s failures. Some members of Congress believe that Deepwater’s problems stemmed from the Coast Guard’s decision to let Integrated Coast Guard Systems, a private company, hand out and oversee contracts for Deepwater. Such entities are known as “lead systems integrators”—an arrangement that became increasingly popular in defense contracting during the Bush administration. ICGS is a joint venture of Lockheed Martin and Northrup Grumman, and it has issued the vast majority of its contracts to those companies and their subcontractors.

Rep. Bennie Thompson (D-Miss.), the chair of the homeland security committee, says “the Coast Guard foolishly handed over responsibility for the Deepwater program to the private sector.” He adds that he and Rep. Elijah Cummings (D-Md.) “remain committed to regaining control of the wheel and steering the Coast Guard acquisition and procurement processes back on course.”

Part of that effort is a bill sponsored by Cummings that is nearing passage in the House. The new law would prevent the Coast Guard from using lead systems integrators to manage future contracting. But the legislation includes exceptions that cover much of Deepwater, and that program represents almost all of the Coast Guard’s planned acquisitions for the near future.

Nick Schwellenbach of the Center for Public Integrity, a good-government nonprofit, says the new law is a half-step at best. “The legislation is fine and contains many of the ‘best practices’ that organizations such as [the Government Accountability Office] suggest,” he says. “But if these practices don’t apply to the Coast Guard’s premier modernization program, what’s the point?”