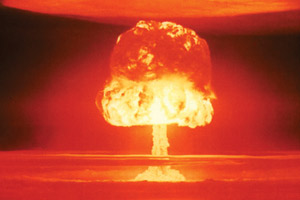 The scenario is a Hollywood staple: Terrorists infiltrate a poorly guarded nuclear weapons facility, capture the bomb, and hold the world hostage to their diabolical demands. But that could only happen in the movies, right? Unfortunately, no. Nearly eight years after 9/11, nuclear specialists are only just starting to coordinate industry-wide practices to keep the materials used to make doomsday weapons from falling into terrorist hands.

The nuclear industry has long collaborated on safety issues, such as preventing reactors from exploding. But even as the threat of terrorism has grown, security has remained an ad hoc affair, with each individual facility or country left more or less to its own devices. It was only last September that a Vienna-based nongovernmental organization called the World Institute for Nuclear Security (WINS) began bringing nuclear security specialists together to formulate procedures to prevent violent extremists from obtaining the key ingredient in nuclear bombs.

The group was the brainchild of former senator Sam Nunn, a longtime proponent of nuclear nonproliferation who, along with Ted Turner, cochairs the Washington-based Nuclear Threat Initiative. With initial funding of $6 million—half from Nunn’s organization and most of the rest from the US Department of Energy—WINS focuses on securing fissile materials at facilities around the world. It’s led by Roger Howsley, the former director of security, safeguards, and international affairs for British Nuclear Fuels, the UK’s government-owned nuclear concern. Mother Jones talked to Howsley about the alarming gaps in security at nuclear plants around the world.

Mother Jones: There has been a lot of talk about the risk of terrorists obtaining nuclear weapons. Is the concern justified?

Roger Howsley: It’s a matter of record that there are terrorist groups that have made plain that if they could access nuclear weapons or nuclear materials and use them for terrorist purposes, they would do so. If you look at some of the court cases related to terrorists, you find that there are people who have actively tried to get hold of nuclear or radioactive materials or have planned to try to get hold them with a view to using them. You have to presume that there is still interest in doing so.

MJ: How active is the black market for nuclear materials?

RH: The number of occasions where nuclear or radioactive materials have been smuggled or stolen is pretty small. The International Atomic Energy Agency keeps a trafficking database in which they have recorded upwards of 100 incidents a year, but I think a lot of those are very small, low-level things of no real significance. Of course the thing that governments most worry about is the possibility of someone stealing a nuclear weapon or enough nuclear material to produce an improvised nuclear device, which would be shocking. But we also need to understand that there would be a high level of public paranoia if it were just a small amount of radioactivity that was dispersed. I’ve heard people call dirty bombs “weapons of mass disruption” as opposed to destruction—psychologically, people don’t respond proportionately to the scientifically calculated harm that might be caused from a radioactive release. You only need to look at the sarin attack on the underground in Tokyo to draw parallels. Quite understandably, people react in a very frightened way when these sorts of things happen. So we shouldn’t underestimate the potential harm that a dirty bomb would do.

MJ: What is the most likely scenario under which terrorists might steal nuclear materials?

RH: I can remember once being contacted when I was a security officer at British Nuclear Fuels. It was a high security transport company calling. They said they’d been away for a couple days’ brainstorming on how they could improve security and thought they’d like to benchmark (that is, compare) with other transporters that carry particularly sensitive materials. They wanted to compare the number of attacks they’d had on their facilities and their transport operations compared with us. And I said, “Well, you can come and talk to us about it, but we’ve actually never had an attack on our facilities or transport operations,” whereas they regularly had their high security vehicles intercepted by bandits or whatever. The point of me saying this is that we don’t have statistical data to justify what we think is most likely to happen.

MJ: What does WINS hope to achieve?

RH: There was enormous reaction across the world after Chernobyl. People began to take nuclear safety much more seriously. In 1989 there was a new organization formed called the World Association of Nuclear Operators. They had looked at the situation, realized the nuclear industry was politically on its knees after Chernobyl, and unless they took really serious action, it was possible that the entire nuclear industry would just grind to a halt. WANO has worked well over the last 20 years or so to improve nuclear safety standards but also to improve the efficiency of reactors. It is very much a model for what we are trying to do. Human nature being what it is, though, people are usually better at reacting to events than trying to prevent them from happening. We should think today what we would do tomorrow after an event, and not wait for it to happen.

MJ: How can the nuclear industry improve security, given that so much remains unknown about potential threats?

RH: One thing that we’re trying to do is actually look at other industries, what their philosophies are. If you look at the diamond industry or the gold industry, they have a definite risk. People try to steal diamonds and gold all the time, so what are they doing in terms of insider threats? What I want is for WINS to think like that, think more imaginatively about how we can improve things. We’re not always necessarily looking for people to spend a lot more money on what they’re doing; it’s much more of a management attitude.

MJ: What is the biggest challenge to improving the security of nuclear materials?

RH: One of the things that’s characterized security generally over the years is that you can’t talk about it…for security reasons! Whereas people in the nuclear safety community have really got to know one another—there’s a stack of international groups that deal with nuclear safety and share best practices—the nuclear security community hasn’t done that. For example, after 9/11, when I rang my counterparts in nuclear companies in Europe and elsewhere, I found myself quite often introducing myself for the first time to the security director, saying I’d like to come and talk to you about what you’re doing in response to these terrorist attacks. There was just no infrastructure in place to do that. People keep to themselves. It’s “need to know,” and all of the things that have been criticized in various reports following 9/11.

MJ: Are there any legitimate security reasons for this?

RH: When you think about the risks we’re worried about, actually getting a group of professional security people together to talk about best practice doesn’t strike me as being a very great risk. We’re talking about good management practices and how to get your guards properly recruited, trained, motivated, deployed…things that are generally transferable around the world. We’re not talking about sharing the combination codes to one another’s facilities.