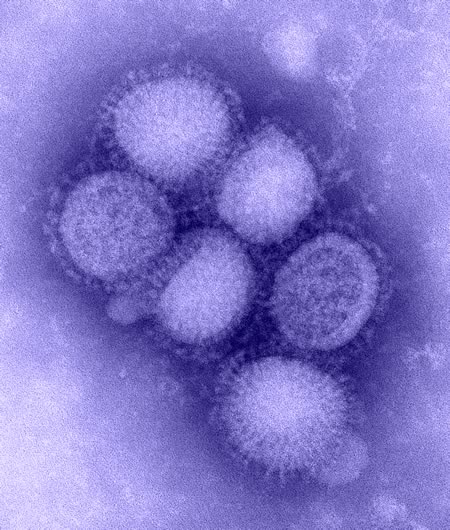 Photo courtesy of the Centers for Disease Control and Prevention

Barack Obama warned today of a resurgence of flu this autumn. But it’s summer in the northern hemisphere. Hard to fret in warm weather. Right?

Well here are some developments worth the worry, summed up by New Scientist.

In June, more than 98 percent of genotyped flu cases in the US were caused by the pandemic swine flu—which is to be expected, since seasonal flus tend to die out in summer.

But the same high percentages of pandemic flu are appearing in the southern hemisphere, where swine flu, A(H1N1), is replacing the seasonal flu.

In the Australian state of Victoria, swine flu now accounts for 99 percent of all flu cases, with similar numbers from South America. The seasonal vaccine is proving useless.

Yet many drug companies are still laboring to produce seasonal flu vaccines for use later this year for the northern hemisphere—when they might well prove useless.

It’s also possible that three viruses will be circulating later this year: the milder H1N1, plus H3N2, plus the swine flu A(H1N1). In this complicated scenario, seasonal and pandemic vaccines would be needed with people in different age groups requiring vaccines based on their exposure to past flus.

During previous pandemics, the pandemic virus mutated and its effects worsened. Some ominous signs are emerging now with swine flu, including a mutation to the virus’s polymerase enzyme that allows it to replicate more efficiently. This mutation appeared in Shanghai and could make the virus more contagious or more virulent or both.

Three cases of resistance to the main antiviral drug Tamiflu were discovered last week in Denmark, Japan, and Hong Kong—including one in a girl who had never taken the drug. This suggests that Tamiflu-resistant swine flu might already be circulating.

Plus the news from Germany today that swine flu is capable of spreading from people to pigs and then rapidly between pigs. This was an experimental exposure in Germany. But if swine flu really does get loose in the ghastly world of pig farms, there’s a risk of the virus mixing with other strains to create a real flu monster.

The German researchers were heartened the virus did not spread to five chickens housed with the pigs. That’s the worst case scenario: a swine-avian flu hybrid. The H2N3 seasonal flu currently circulating has the ability to bridge that gap since it’s composed of swine and avian flu genes dating back to the 1957 pandemic.