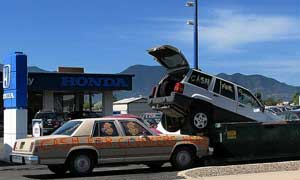 On Monday night the Car Allowance Rebate System, otherwise known as Cash for Clunkers, rolled off the lot for the last time. While everyone from Sen. Lamar Alexander (R-Tenn.) to climate change expert Joe Romm has praised the program—which offered drivers up to $4,500 to scrap a gas guzzling vehicle for a more efficient one—many questions remain about its implications for the environment and the US economy. Let’s look at the CARS American taxes paid for.

Not likely: While the popular program was never intended to rebuild the US auto industry, some commentators worry that the tune-up could actually backfire. Just as no one predicted that the program would burn through its initial billion-dollar allotment in a week’s time, everyone is unsure what will happen to auto sales now that the incentives have been phased out. In 1997, the end of a similar program in France led to a severe drop in auto sales—a hit that the fragile US economy could struggle to withstand.

The short-term boost for Detroit may also cost it customers in the long term. The top ten clunkers were all American made, but only four of the top ten new vehicles purchased with CARS cash were from the Motor City. The Economist warns that the Big Three, in particular GM and Chrysler, “may find that cash-for-clunkers, by turning more American heads towards Asia’s carmakers, is a present they regret receiving.”

Will CARS pass its emissions inspection?

Highly doubtful: The valuable environmental features present in earlier versions of the bill were stripped to drive CARS past recalcitrant Republicans. When compared with the rejected clunkers, the 700,000 vehicles purchased through the program represented an improvement in average fuel economy by a higher-than-expected 9 miles per gallon. But the bar was set exceedingly low. With an average of 25 mpg, the vehicles bought with the rebate are still rate below the federal corporate average fuel economy standard for cars (27.5 mpg) and well below the minimum vehicle efficiency standards in other developed nations—including China. And, because of an odd deal with vintage auto collectors limiting the rebate to clunkers less than 25 years old, some of the least efficient gas-guzzlers were excluded from the program.

The program’s environmental opportunity costs are also significant. Sen. Charles Schumer (D-New York) praised the program as “a smart investment in our nation’s economic and environmental future.” However, with analysts estimating that the government paid from $200 to $500 for each ton of carbon dioxide removed from the road, the bill could hardly be described as a savvy environmental investment. (By way of comparison, the Congressional Budget Office predicts that the Waxman-Markey cap and trade bill will price a ton of CO2 at $28 by 2020—meaning Cash for Clunkers has massively overpaid for its meager greenhouse gas reductions.)

In addition to funneling more money into America’s auto addiction instead of job-creating public transportation investment, the cash to pay for the second round of clunker rebates was drawn directly from the green energy loans portion of the stimulus bill. Money that could have gone toward funding clean energy research was instead being spent on Cadillacs and Hummers.

But the sleekest model is a simple one that’s been kicking around Congress since Kyoto: Comprehensive cap and trade legislation that would establish a firm carbon price and let consumers and companies figure it out from there. Waxman-Markey, for all of its defects, is still the best vehicle to move us toward a clean energy economy.