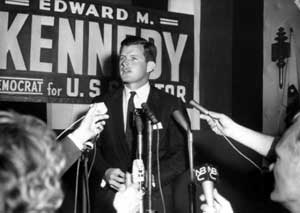 One of the great and bitter lessons of Senator Edward M. Kennedy’s political career is also the most timely for House Democrats: The need to seize the political moment on health care reform.

Republicans and Democrats have never been as close to fixing health care as they were in 1973, when the Nixon administration was engulfed in the Watergate scandal and eager to change the subject. Knowing that Ted Kennedy would soon introduce a politically potent plan for nationalized health care, Nixon charged Caspar Weinberger, his Health Education and Welfare secretary, with crafting a bill that would “regain the initiative in the health arena.” What Weinberger came up with looks positively Marxist compared to the way Republicans are slandering Obamacare: The plan, unveiled in Nixon’s State of the Union address, would have required employers to provide health insurance and offered federally-financed coverage to many low-income Americans.

Though that sounds pretty good in the context of Washington’s diminished expectations these days, Kennedy publicly opposed it at the time as a potential windfall for private insurance interests. A few months later, he announced his own plan, a single-payer system that would nonetheless preserve a role for private insurers as fiscal intermediaries and providers of supplementary benefits. Presidential historian Alvin Felzenberg, an adjunct professor at George Washington University, believes Kennedy could have negotiated an historic compromise with Weinberger, but gave in to pressure from the labor unions to wait for a better deal under a new administration. (Kennedy later gained a reputation for pragmatism in negotiating bills like No Child Left Behind). “Kennedy said that was his biggest regret,” Felzenberg told me today, “because he had a Republican president willing to dance with him.”

The death of that era, embodied by Kennedy’s passing today, is truly sobering. Kennedy and his labor allies could hardly be blamed for thinking that the tide of progressivism was still on the rise, or that the potential for honest debate was a given. Who could foresee that the GOP, far from chastened by Watergate, would become ever more beholden to Nixon’s polarizing Southern Strategy? Or that American pragmatism would give way to the politics of fear, lies, and ideology that we’ve seen in the recent town halls?

Ultimately, Obama and progressives in Congress will sign on to some sort of health bill; the stakes are too high for them to take a pass. The question is under what terms they’ll be able to shore up the effort in years to come. With the political pendulum on an uncertain arc, what cause now for Kennedy’s famous optimism?