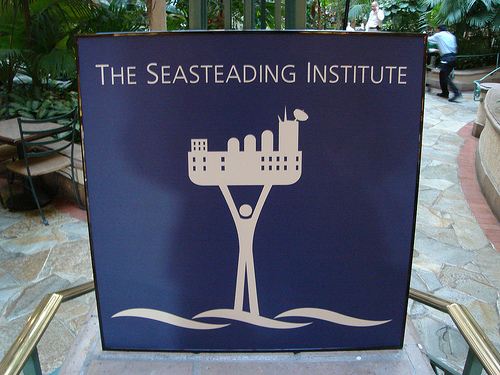 Used under a Creative Commons license from Flickr user mlinksva

It should come as no surprise that Patri Friedman, son of anarcho-capitalist professor David Friedman, and grandson of Nobel Prize-winning economist Milton Friedman, is a guy who prides himself on having innovative and controversial ideas. The project he’s been devoted to for the past year and a half is called the Seasteading Institute, a research center with a mission “to further the establishment and growth of permanent, autonomous, ocean communities, enabling innovation with new political and social systems.”

Where did the youngest Friedman get this idea? “I wanted to find other countries that I could possibly settle in,” Friedman said. “After researching places that people have ex-patriated to like Costa Rica, I realized that no country is better than the USA. So I looked into the idea of forming new nations. The ocean is the best place to do this, because in the ocean you don’t have to fight with others as you would have to on land.” The Institute defines seasteading as creating “permanent dwellings on the ocean—homesteading the high seas.”

Friedman cites Marshall Savage’s The Millenial Project: How To Conquer The Galaxy In Eight Easy Steps and Wayne Gramlich, the man who coined the term “seasteading” in the early 80s, as inspirations for his work. Gramlich happened to live just two miles from Friedman: The two met and the rest is history, or should I say future.

Friedman’s ideal is to live in a society where the rules are his own morals. He says that this approach was selfish at first, but he then realized that he could create a movement that is larger than his own personal utopia. “Let lots of different groups try out their own ideas about utopia,” he said. “They could vote to have a communist government. Small numbers of people can try a better way to live. A colony could start with about 100 people. They’d have to be dedicated but you don’t have to find that many of them.”

But creating utopias wouldn’t be the only benefit of seasteading: Friedman believes that  mobile, floating societies will be more

resistant to climate change than land-based civilizations, particularly when fighting rising sea levels. “The threat of an ice age is much more disastrous than global warming,” he said. And should such an ice age come, Friedman thinks, it would be easier to move people toward the equator if they lived on seasteads instead of on land.

As for how these seasteads would be powered, there’s solar energy, wind energy, wave energy, algae and phytoplankton energy, oceanic thermal energy, and more. Fossil fuels would only serve as a backup energy source.

Though Friedman received an initial $500k investment from Paypal founder Peter Thiel in 2008, the financial meltdown has crushed his first dreams of creating a luxury hotel/colony off the coast of Southern California any time soon. When I asked him if he thinks he’ll see these ideas come to fruition in his lifetime, the 33-year-old Friedman said, “It won’t be for at least another decade, but I have many decades left.”