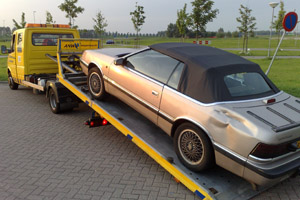 Classic: One of California’s top tort-reform advocates has gone and filed one of the very lawsuits he’s long campaigned against. Legal Pad has the full story on excessive litigation opponent-turned-excessively litigious plaintiff Fred Hiestand:

The man whose name is synonymous with tort reform — he’s the Civil Justice Association of California’s general counsel — has filed a class action against the city of Sacramento, the city’s police chief, city police officers and a tow truck company for towing his car after he left it in a no-parking zone.

What’s more, Hiestand is seeking damages from the tow truck company under Business and Professions Code Section 17200. That, in case you don’t recognize it, is California’s Unfair Competition Law, the very law that CJAC and business groups successfully curbed in 2004 via the voter-approved Proposition 64.

“It’s hysterical,” said Timothy Blood, a Coughlin Stoia partner who specializes in UCL suits. “The whole PR campaign during Prop 64 was that 17200 was driving businesses out of California. So what does [Hiestand] do? He sues a small business.”

“We’ve never said that all class actions are meritless,” Hiestand said. When you’ve exhausted all your other administrative options, they’re a viable choice, he said.

And just to show he’s not some money-hungry litigant, Hiestand pledged to give any award money left over from paying his costs to “fighting frivolous class action lawsuits.”

Hiestand’s not the first foe of “lawsuit abuse” to seek legal redress when the going got tough. Robert Bork filed a personal injury suit against a club where he fell and injured himself. Former Mississippi Senator Trent Lott railed against “jackpot justice” until Katrina destroyed his home and he joined a class action suit against his insurance company. That’s not to say that they were being frivolous; both settled out of court. But Hiestand’s filing has the mix of disingenuous literalness and inflated self-regard that are the hallmarks of truly pointless lawsuits. He contends that he knowingly left his car in a no-parking zone only to be towed illegally because there were no signs saying that might happen. Sounds a bit like the judge who unsuccessfully sued his dry cleaners for $54 million  because they didn’t live up to their “Satisfaction Guaranteed” sign. Funny how no one thinks they’re gumming up the wheels of justice when it’s their case on the docket.