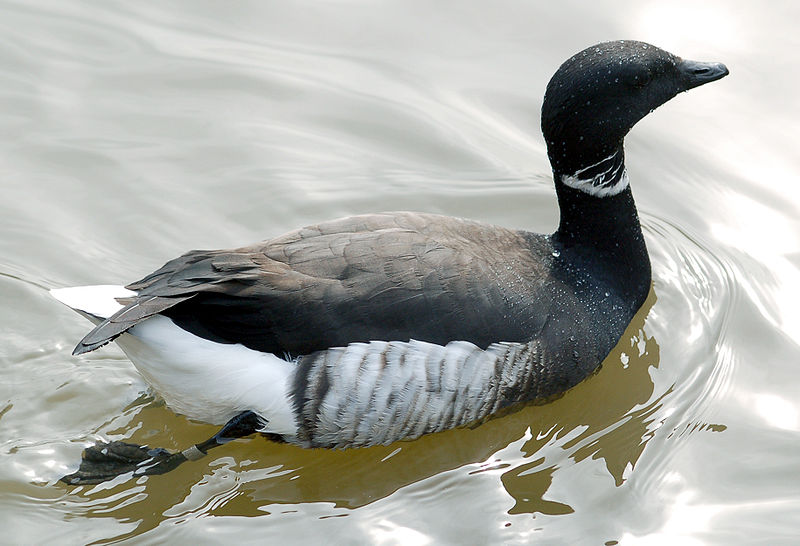 Big change. Usually Brant stream south along the Pacific flyway each fall. They’re a familiar site off the West Coast, long lines riding on tailwinds above the surfline at speeds over 60 mph.

Their destination is a series of shallow lagoons in Baja California, where California gray whales  breed, and where the birds feed on eelgrass.

But whereas once nearly the entire population of Pacific brant overwintered in Mexico and fewer than 3,000 were known to overwinter in Alaska, now 40,000 birds, or 30 percent of the population, are opting for Alaska instead.

The change coincides with a general warming of temperatures in the North Pacific and Bering Sea and its well-documented effect on the abundance and distribution of numerous marine species, including walleye pollock, Pacific cod, northern fur seals, and thick-billed murres.

The effects on species restricted to estuarine ecosystems had not been investigated. But David Ward of the USGS and lead author of the study appearing in Arctic has been investigating brants for 30 years.

The shift in migratory patterns appears related to changes in the availability and abundance of eelgrass. Coastal sea ice isn’t forming or is less extensive, and so more nutrient-rich eelgrass is accessible to the geese year round. Ward and his coauthors suspect that Pacific brant numbers will continue to increase in Alaska during winter, given climate predictions.

But there’s a big risk in this new scenario, and it was previewed in the winter of 1991-92, when mild temperatures were punctuated by an extended period of cold weather and the formation of extensive shoreline ice. This scenario could become more common as climatic variability increases. Nowadays, sudden, severe cold bouts would put more of the entire brant population at risk.

Changing winds are also affecting the migration of the geese. Traditionally the birds wait for a storm system to come down through the Aleutians so they can catch the tailwinds south. (I wrote about godwits doing the same thing in Diet For A Warm Planet.) But the storm track is changing and there are fewer days each fall with favorable tailwinds to assist the geese on their 3,000 mile-long migration to Mexico.

In other words, the brant may not be opting to stay so as much as they’re grounded.

Ward and his colleagues found  the increase in the number of brant overwintering in Alaska was clearly linked to fewer number of days with favorable southward winds.