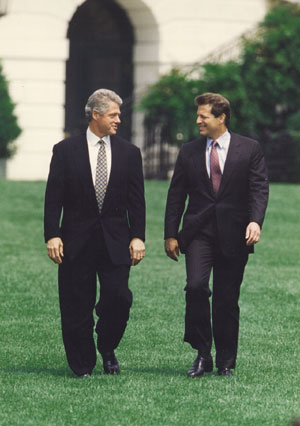 On Monday, USA Today ran a front-page article on the soon-to-be-released book chronicling a series of secret interviews Pulitzer Prize-winning author Taylor Branch held with President Bill Clinton throughout the Clinton presidency. The piece focused on a bizarre episode in which Russian President Boris Yeltsin during a visit to Washington in 1995 ended up in his underwear and drunk on Pennsylvania Avenue, trying to hail a cab. As for the Lewinsky affair, Clinton told Branch, he “just cracked” under political and personal pressures. USA Today also noted that Clinton and Al Gore had an explosive conversation following the 2000 election. But the newspaper provided only a few details on this meeting.

I’ve obtained a copy of the book, and that encounter, as Clinton recalled it to Branch, was more than dramatic; it was also weird.

During the discussion, Clinton told his vice president that he was disappointed that Gore had not used him in the last ten days of the 2000 campaign in strategically significant state—Arkansas, Tennessee, New Hampshire, and Missouri. But Clinton said he could understand that. What was more upsetting for him, Clinton remarked to Gore, was that Gore had not crafted a more winning message during the campaign, that he had not campaigned on any grand themes. Clinton insisted to Gore that he hadn’t cared about how Gore had referred to Clinton—and his personal scandal—during the campaign. Paraphasing this portion of the conversation, Branch writes that Clinton told Gore, “To gain votes, he would let Gore cut off his ear and mail it to reporter Michael Isikoff of Newsweek, the Monica Lewinsky expert.”

At one point in the conversation, Gore told Clinton that he was still traumatized by having been caught up in the fundraising scandals of the 1996 Clinton reelection campaign, and he indicated that he blamed Clinton. Clinton could hardly believe this, and he told Branch that Gore was probably in shock from the election or unhinged, remarking, “I thought he was in Neverland.”

In this same conversation, Gore pressed Clinton for an explanation of his affair with Lewinsky, noting that Gore had stood by him throughout the ordeal without Clinton ever confiding in him. There was little to say, Clinton replied. But Clinton did say that he was sorry. Gore responded that that this was the first time Clinton had apologized to him personally. This angered Clinton, who countered that he was only repeating what he had already said publicly. Moreover, Clinton noted, Hillary had more to resent that Gore did, and she had just campaigned successfully for Senate by unabashedly citing the Clinton-Gore record—not running away from it. Gore responded with his own anger, insisting that Clinton’s character had been at the root of his failure to win the White House. Clinton acknowledged that he had not confessed to those closest to him, but that he was glad he had not talked more about the affair, for that would have made the controversy even worse.

The 707-page book, titled The Clinton Tapes: Wrestling History with the President, is a fascinating read, full of the most inside information on the policy fights, political tussles, and personal controversies of the Clinton years. I haven’t finished the book, but here are other intriguing portions that caught my attention:

* In an interview with Branch shortly after he left office, Clinton passionately defended his last-minute pardon of Marc Rich, the fugitive financier. Summing up Clinton’s outrage over the dust-up caused by the pardon, Branch describes the now ex-president’s rant: “They said Clinton had a conflict because Rich’s ex-wife was a donor to his library. Lord have mercy, he cried, Papa Bush pardoned Caspar Weinberger and others before the Iran-contra prosecutions may have targeted Bush himself. Nobody fussed.” Clinton showed no remorse to Branch about this pardon.

* In 1996, when Washington author Sally Quinn was telling people that Hillary had not written her book, It Takes a Village, Branch suggested to the First Lady that she invite Quinn and her husband Ben Bradlee to the White House. “You know,” Hillary shot back, “she has been hostile since the moment we got here. Why would we invite somebody like that into our home. How could she expect us to.” Branch writes, Hillary “said Quinn and her friends simply invented gossip for their dinner circuit. They had launched one juicy affair between Hillary and a female veterinarian attending Socks, the Clinton family cat, with tales about how somebody discovered them in flagrante on a bedroom floor in the White House.”

* After the 1998 congressional elections, Clinton bemoaned the fact that GOP Rep. Jim Bunning had narrowly won a Senate seat in Kentucky. Branch writes, “He said Bunning, a former baseball player, was so mean-spirited that he repulsed even his fellow know-nothings. ‘I tried to work with him a couple times,’ said Clinton, ‘and he just sent shivers up my spine….I know you’re a baseball fan and everything, and you don’t like to hear it, but this guy is beyond the pale.'”

* When Clinton prepared for military strikes against Iraq in 1998, he griped about former President Jimmy Carter. “[Republican Senator Bob] Dole will support me,” he told Branch. “Carter will probably criticize me. Carter always criticizes, but he doesn’t have much positive to say.”

* In 1997, when Senate Republicans were opposing Clinton’s pick for CIA chief, Anthony Lake, Clinton told Branch he considered Senator Richard Shelby, an Alabama Republican (who had once been a Democrat) and a leading Lake detractor, to be a dogged and spiteful man. Clinton added that Shelby was supported by two GOP  “know-nothings” on his Senate committee, Jon Kyl of Arizona and Jim Inhofe of Oklahoma.

* In 1996, Esquire magazine was looking for a writer to contribute a pro-Clinton article to its election issue. After Clinton hit snags with Texas columnist Molly Ivins, Harvard professor Thomas Patterson, and bestselling crime author John Grisham, Branch took on the assignment.

* In 1994, after Bob Woodward’s book on the budget battles of Clinton’s first year in office, The Agenda, came out, Clinton told Branch he suspected that the major sources for Woodward were George Stephanopoulos, Paul Begala, and Alan Greenspan.

* In 1994, Hillary Clinton told Branch that a year earlier she had been at a dinner party where Henry Kissinger had whispered to her that if her health care plan became law he would never be allowed to see his personal physician again. Hillary had tried to explain to Kissinger why this was not true. But, Branch writes, “she said Kissinger merely scowled and growled behind his ‘game face’ of impregnable secret knowledge.” Hillary also disclosed to Branch that she had dreamed of being at a banquet with Kissinger and telling him that her health care reform effort was not dead and “there’s always light at the end of the tunnel.”

* In 1995, Clinton predicted to his confidantes that Colin Powell would challenge him in 1996, while Hillary and Gore contended that the retired general would not. After Powell declared he would not run, Branch writes, the president did not call Powell, fearing this would “advertise his relief.” Clinton’s “mistaken prediction about Powell,” Branch adds, “seemed to gnaw at Clinton.”

* Toward the end of 1995, when Japan was in the midst of political and economic crises, Gore urged Clinton to visit Japan. Clinton, though, nixed the dates Gore suggested, saying, “Al, I am not going to Japan and leave Chelsea by herself to take” her junior-year midterm exams. This caused a big fight between the two.

* Following his 1996 reelection victory, Clinton was mad about revelations of Democratic Party campaign finance irregularities. He feared—after Whitewater—that this could be a legitimate scandal. He was annoyed that Democratic Party officials could not provide him answers about what had gone wrong. But, Branch writes, “he thought fund-raiser Terry McAuliffe vaguely knew.” Referring to antagonism toward him within the press at this time—especially at The Washington Post and The New York Times—Clinton declared, “I am bitter about it.”

* In 1997, after New York Times columnist Maureen Dowd wrote an acerbic column about Clinton and golfer Tiger Woods—maintaining that the the two green-eyed hucksters deserved each other—Clinton told Branch, “She must live in mortal fear that there’s somebody in the world living a healthy and productive life.”