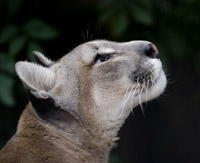 Yes, we’ve all heard that cougars, that pop culture term for older women who prefer younger male lovers, are running rampant. Especially in Palo Alto. But those “cougars” actually have a few things in common with the real, endangered cougars (Felis cougar concolor). The average cougar is only slightly smaller than a woman, measuring 5′ to 6′ in length and weighing in at 105 to 150 pounds. Cougars, also called mountain lions, pumas, and catamounts, are also known for their “screams” which some say sound distinctly like a woman. Hear for yourself here.

All joking aside, cougars are in trouble. They’ve been hunted and poached to the point that their natural prey species like deer are creating overpopulation problems. Somewhat ironically, the farmers and ranchers who complained about and sometimes shot cougars now have to deal with depleted grasslands because of exploding deer populations. Even though cougars are federally endangered, and even though there have only been 10 fatalities since 1990, some hunters insist on believing there’s actually a cougar overpopulation and that their children and pets are next on the dinner menu. In actuality, the cougar is shy, solitary, and rarely sighted: most interactions with humans end up with the cougar being eventually killed, rather than the other way around.

However, there’s no denying that the cougar is a formidable predator. It can leap 15 feet into the air, land from a 60′ drop and take off running, and will prey on animals as large as elk. They’re undeniably stealthy, and one of the few mammals in North America that can take on a full-grown human. So it’s understandable that hunters would be afraid of them: even with their high-powered rifles, they might not hear the cougar coming.

Although hunting and trapping do hurt cougar populations, one of its main threats is human development dividing or encroaching upon the 100 square miles each cougar needs as personal territory. The big cats only come together a few times a year to mate: other than that, they roll solo. Reading reports of cougar attacks, it seems that hikers are often the ones targeted. Luckily, only about 10% of cougar attacks are fatal, but to keep your interactions with this powerful, endangered creature safe, here are some tips:

Don’t hike/bike/jog alone, especially if you’re under 150 lbs. Don’t go out after dark. Don’t walk under ledges, or other handy places where a cougar could drop from above (a favorite ambush tactic). If you do encounter a cougar, don’t back down. Don’t crouch or squat: instead, spread your arms or coat to make yourself look bigger. Don’t run, it’ll engage the cat’s prey instinct. Don’t turn your back. Do make loud noises, throw things, and otherwise show the cougar you’re not prey and will put up a fight. Stare it in the eyes. And naturally, if you got mace, use it. Liberally.