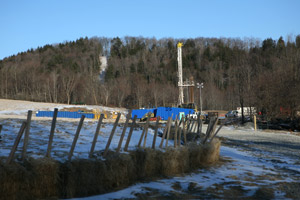 Pennsylvania environment officials have charged Cabot Oil and Gas with five violations after nearly 8,000 gallons of hydraulic fracturing solution spilled from a pipe system in two separate incidents near the town of Dimock last week. The department reported that a third, smaller spill, occurred at the site Tuesday morning.

According to the state, Cabot failed to prevent a fracturing fluid discharge, failed to keep that discharge from escaping into the environment and from entering a creek, and inappropriately dammed that creek after the spill, among other violations. The company could face fines topping $130,000.

“I was concerned with two releases,” said Bob Yowell, director of the north central regional office of the DEP. “A third release, although it was relatively small, gives us great concern that something unusual is happening at this particular well. This isn’t a normal situation.”

The spills began on Wednesday, Sept. 16 at 2 p.m. when a pipe coupling failed on the system that mixes the fracturing ingredients, sending as much as 2,100 gallons of fluid into the environment. At 8 p.m. that same day another pipe coupling broke in the same system, and 5,880 additional gallons of fracturing fluid were discharged, according to both state and Cabot accounts. On Tuesday morning, Sept. 22, another hose ruptured under pressure, releasing 420 more gallons of the same mixture, though only 10 gallons of that last spill escaped from the company’s spill catch system.

According to Ken Komoroski, a Cabot Oil and Gas spokesman, the fracturing procedure was being conducted by two contractors: Halliburton, one of biggest oil services companies in the world, and Baker Tanks, a petroleum storage tank company.

“Our policy is zero spills, zero unpermitted releases, and those goals were not met so there needs to be evaluations of what can be done to prevent them in the future,” Komoroski told ProPublica. “The spills were less than .5 percent gel, and at 99.5 percent water, this material is not hazardous or dangerous nor does it present any environmental risk.”

Pennsylvania officials allowed Cabot to continue fracturing the well while they conducted their investigation. According to the DEP’s Yowell, halting the fracturing may have presented additional problems, though he could not specify what those risks were. Cabot voluntarily halted the fracturing on Tuesday, after the third spill occurred.

The investigation into the spill is ongoing. According to a DEP press release and the notice letter sent to Cabot, a nearby wetland has been flushed and further remediation may be required, including excavation of soil surrounding the site.

ProPublica reported the spills Monday, stating that the fluids had seeped into Stevens creek and killed fish there, an assertion repeated in the DEP’s press release on Tuesday. Follow-up interviews with the state’s Department of Fish and Boat Commission, however, show that a small number of minnows were harmed and that the damage to the creek appeared minimal. However, water samples from the creek are still being evaluated, according to the DEP’s Yowell.

According to a Material Safety Data Sheet provided to the state by Halliburton, the substance spilled was a lubricating gel used in hydraulic fracturing that poses a substantial threat to human health and was described in the Halliburton document as a “potential carcinogen” that has caused skin cancer in animals.

Cabot’s Komoroski points out that the document refers to the gel’s concentrated form, and that the mixture spilled in Dimock was mostly water. He also disputes the information on the Halliburton form that warns the product is a “potential carcinogen.” The disclosure, required by law on the MSDS form, was an effort to be extremely conservative and account for the possibility that a derivative from the refining process could be part of the gel mixture, Komoroski said. He could not say what that derivative was, except that it is a hydrocarbon.

Halliburton did not respond to questions about the details of its MSDS disclosure for the product, called LGC-35 CBM.