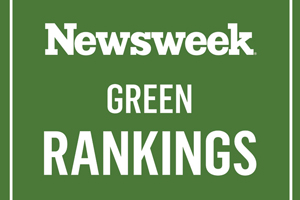 Newsweek has just released its first-ever environmental ranking of America’s 500 biggest companies. And the winner is…Hewlett-Packard. The mag gives HP props for e-waste recycling, renewable energy use, and its efforts to reduce greenhouse gas emissions. OK, but what about those annoyingly wasteful printer cartridges? More on that in a sec. But first, a few selected rankings: Dell is #2, Johnson & Johnson #3, Starbucks #10, McDonald’s #22, Wal-Mart #59, Whole Foods #67, Halliburton #169, and Monsanto #485. Energy and oil companies bring up the rear, with ExxonMobil down at #395 and Peabody Energy coming in dead last.

As interesting as it is to pore over the rankings, do they mean anything, or are they—like US News and World Report’s college list—just another exercise in self-reported accomplishments, stat rigging, and brand polishing? Green business guru Joel Makower says there are undoubtedly rough spots in Newsweek‘s methodology, but overall he’s impressed: “I’d rather step back and admire this first effort, however imperfect, and salute the team for doing what hadn’t previously been done, or done well: brought together a wealth of data on a broad spectrum of the world’s biggest companies to provide a snapshot of the green business world.” TreeHugger’s David DeFanza is more skeptical, noting that the rankings seem to emphasize a company’s green “intentions” over its real-world impacts, creating “an unsettling discrepancy between environmental-friendliness and ‘greenness.'”

Which brings us back to those HP printer cartridges. The Newsweek rankings accentuate the positive—in fact, they don’t even elaborate on why the “worst” companies deserved their ratings. Instead, they just give each company’s scores on several broad metrics. This can be confusing: For example, what does it mean that #500-ranked Peabody Energy, with a lousy Environmental Impact Score of 0.2 out of 100 (100=best), gets four little green leafs in the Toxic Emissions column (five=best)—but #3-ranked Johnson & Johnson gets just two? If Johnson & Johnson has a toxics problem, why not quantify that? This might not have changed its ranking, but some acknowledgment that even the “greenest” companies are far from perfect would have added a nice touch of transparency and complexity. (It looks like you might be able to get some of these stats if you order the full report—for $1,295.) Likewise, does corporate responsibility in areas besides the environment count for anything? In its introduction to the rankings, Newsweek praises Marathon Oil (at #100, the highest ranked energy company) for capturing natural gas flares…in Equatorial Guinea, one of the world’s most corrupt petro-states. But such inconvenient details would violate the spirit of the list, where nobody is forced to look bad.

That’s not to say that there’s no substance here, but it’s hard not to feel like the whole thing is an exercise in branding—for both the companies and Newsweek. No doubt many readers will come away with the impression that the top-ranked companies are the nation’s greenest, when in fact, they’re just the greenest S&P 500 companies, which may not be saying much. And no doubt many a celebratory press release and ad campaign will neglect this distinction. (See here.) The rankings are sure to become a regular feature in the magazine, spurring firms to catch its attention with new policies and projects. That could be a good thing if Newsweek keeps refining its methodology and uses the list to get companies to divulge more information on their real impacts. Or it could just turn the green rankings into just another list of PR-savvy usual suspects.

Update: Cary Krosinsky, vice president of Trucost, which provided the environmental impact data for the Newsweek list, thought that my post made it sound like the rankings did not take into account any negatives. That’s not the case, so I’ve reworded the line about TreeHugger to reflect its concern that the rankings emphasized companies’ environmental accomplishments over their sins. Trucost provided the magazine with more than 700 data points on each company’s environmental footprint, inlcluding resource use and pollution; some stats were provided by the companies themselves and others were calculated by Trucost. The “Environmental Impact Score” based on these data account for 45% of a company’s overall score on the list, which was tallied by the invesment research firm KLD. So, just to be clear: Negatives were taken into account. However, my basic point stands: The list makes it difficult for information-hungry readers to get a clear picture of exactly how “good” or “bad” a company’s impacts are, much less how they figured into its overall ranking. I understand why Newsweek decided not to bore its readers with all that data and number crunching, but presenting even a little slice of it online would go a long way toward assuaging skepticism and providing consumers and companies with more useful metrics for gauging what “green” really means.