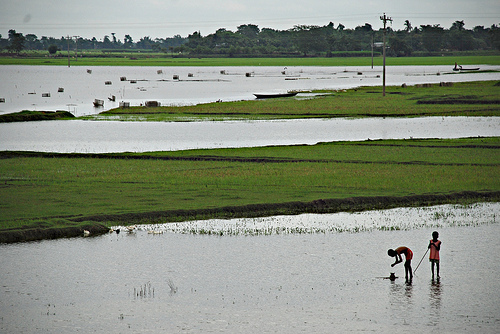 The number one priority at the G20 summit in Pittsburgh this week will be the economy, for obvious reasons. But the assembled leaders had earlier signaled that they’d tackle another thorny subject with massive financial ramifications: raising money to help poor countries deal with climate change. This important negotiation now seems to be slipping further and further down the G20 agenda. But if world leaders don’t address it soon, we’ll get stuck with a bill that makes the bank bailouts look like chump change.

This is a dangerous game, because money for adaptation is vital in its own right. McKinsey recently released a major study of the economies of countries that are especially vulnerable to global warming—and which are already losing up to 12 percent of annual GDP to existing climate events. Some areas in these countries will one day become unliveable. But the study found that between 40 to almost 100 percent of their national economic losses that are projected to be caused by climate change by 2030 could be averted by adaptation measures—like putting homes in flood-prone areas on stilts or improving irrigation and soil technology in drought-stricken regions.

Such investments aren’t cheap. Many require big sums upfront. Even the research on the best adaptation strategies remains pretty rudimentary right now. The World Bank estimates that poor countries need somewhere in the region of $100 billion a year by 2030 to adapt to climate changes that are already locked in, no matter what gets decided at Copenhagen. So far, though, the developed world has committed to a measly $300 million annually. And the world financial crisis has made wealthy countries leery of donating big sums for this purpose. Instead they’ve been casting around for more gimmicky solutions (currently, adaptation money will be raised via a levy on the Kyoto Protocol’s offset program, the Clean Development Mechanism.)

In July, Obama said that the G20 nations should report on climate financing at Pittsburgh. The EU said earlier this month that it would be prepared to chip in up to $21 billion, depending on what other countries contributed. This raised hopes that the gathering would finally come to an agreement on an adaptation fund. More recently, however, the US has tried to downplay those expectations, and instead made a call to phase out fossil fuel subsidies its big pitch at the summit. But time is running out. If countries like Bangladesh and Vietnam are to have any hope of preventing catastrophic upheavals and massive economic losses, they need money and time to implement carefully planned, systemic adaptation plans. If world leaders don’t act soon, the ultimate cost will be what Lord Nicholas Stern, author of the UK’s mega-survey of climate change economics, has termed “”the greatest market failure the world has ever seen.”