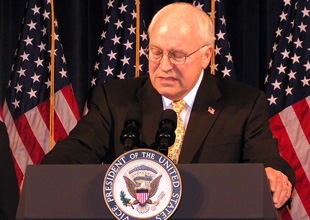 On Tuesday, President Barack Obama visited the National Counterterrorism Center outside Washington and declared that “because of our efforts” al Qaeda and its allies have “lost operational capacity.” He cited recent arrests of terrorist suspects in Colorado, New York, Illinois, and Texas, asserting that these actions have made the nation safer. Afterward, his critics responded with…silence. Since Obama was sworn in, conservative hawks, led by former Vice President Dick Cheney, have been pounding the president for being weak on national security, accusing him of leaving the country vulnerable to another catastrophic attack. But this chorus of scaremongers tends to go mute when the Obama administration scores apparent counterterrorism successes. Cheney, for instance, hasn’t said anything publicly about the arrest last month of Najibullah Zazi, the Denver airport shuttle driver, and others accused of planning an al Qaeda bombing operation.

Nor have Cheney and his amen corner acknowledged other gains in the fight against al Qaeda. Instead, it’s been a fussillade of potshots. Let’s roll the tape.

On February 3, two weeks after Obama moved into 1600 Pennsylvania Avenue, Cheney told Politico that there is a “high probability” that terrorists will launch a nuclear or biological strike on the United States and that they would have a better chance of success thanks to Obama’s policies. He added, “When we get people who are more concerned about reading the rights to an al Qaeda terrorist than they are with protecting the United States against people who are absolutely committed to do anything they can to kill Americans, then I worry.” In mid-March, Cheney said Obama’s actions will “raise the risk to the American people of another attack.”

On April 1, Abdullah Hamas al Filistini, reputedly a senior al Qaeda trainer, was killed by a CIA Predator drone strike in Pakistan—part of the search-and-bomb program started by President George W. Bush that the Obama administration has continued. Cheney said nothing about this attack. But three weeks later, the ex-veep again slammed Obama. Referring to the president’s banning of extreme interrogation techniques (a.k.a. torture), Cheney huffed during an interview with Sean Hannity that the “Obama people” believe that they don’t need “tough policies.”

In May, Cheney made a similar claim on Face the Nation, asserting that under Obama the nation will not have “safeguards” against terrorists. And at a much-covered speech at the American Enterprise Institute—delivered the same morning Obama was giving a speech on national security and civil liberties—Cheney again charged that the administration was placing the United States at risk by adopting “half-measures” in the fight against Islamic extremists: “There is never a good time to compromise when the lives and safety of the American people are in the balance.” That same day, GOP chair Michael Steele accused the Obama administration of endangering the nation by planning to shut down the Guantanamo detention facility. Five days later, Rep. Eric Cantor, the Republican House whip, claimed that the Obama crowd had a “lack of regard for national security.”

Such comments have been part of a Republican effort to sow doubts about Obama’s commitment to protecting the United States from al Qaeda and other murderous extremists. Yet in the past few months, a number of so-called high-value al Qaeda and Taliban targets have been killed by Obama-ordered Predator strikes in Pakistan. The White House refuses to discuss such assaults, which do result in civilian casualties, and there’s no telling the degree to which these attacks truly disrupt al Qaeda’s and the Taliban’s efforts. Some policy wonks contend that the Predator strikes are counterproductive, for they anger Pakistanis and make it more difficult for the United States to forge a working relationship with a Pakistani government that can be committed to combating al Qaeda and the Taliban. But in the world of counterterrorism, these attacks are regarded as wins. And Cheney, when he was vice president, hailed the Predator as a key weapon in the fight against extremists.

The Long War Journal, a website that chronicles the struggle against al Qaeda and other terrorist movements, tracks the high-value targets killed by CIA drones in Pakistan. Here’s its recent list:

* June 23: Khwaz Ali Mehsud, a senior deputy to Baitullah Mehsud, the top leader of the Taliban in Pakistan.

* September 8: Maulvi Ismail Khan, a military commander in the Haqqani Network, a terrorist group responsible for major attacks in Afghanistan.

* September 14: Najmuddin Jalolov, the leader of the Islamic Jihad Group, a breakaway faction of the Islamic Movement of Uzbekistan. He was allied with al Qaeda.

* September 14: Ilyas Kashmiri, the operations commander of the Harakat-ul-Jihad-Islami, a paramilitary organization active in Pakistan, Bangladesh, and India, and the operations chief of Brigade 313, a coalition of several terrorist outfits.

In counterterrorism terms, this is an impressive tally. (And according to the Long War Journal, Predator attacks in Pakistan in 2008 caused 286 al Qaeda and Taliban casualties; this year, through September, the number is 404.) Killing Baitullah Mehsud was particularly significant. As the Wall Street Journal noted, he was “Pakistan’s most wanted man, responsible for a spate of suicide bombings in Pakistani cities in recent years.” These attacks included the December 2007 assassination of former Prime Minister Benazir Bhutto and last year’s bombing of the Marriott Hotel in Islamabad, which killed 54 people. There was a $5 million bounty on his head for his support of the insurgency in Afghanistan. Moreover, the Journal reported, “the strike on Mr. Mehsud was the first such attack not immediately condemned by Pakistani officials. Pakistan’s foreign minister and the head of its Interior Ministry both said the killing was a significant success in the battle against militants.” (By contrast, according to US News & World Report, the Bush administration “had refrained from going after Mehsud.”)

Also, a US commando raid in Somalia on September 14 reportedly killed Saleh Ali Nabhan, an al Qaeda operative suspected of being part of the operation that bombed the US embassies in Kenya and Tanzania in 1998.

According to Nexis and Google searches, Cheney has made no public comment about the killing of any of these militant leaders and operatives. Nor have Cantor, Steele, or any other Republican leader. Nor have Glenn Beck or Rush Limbaugh. Certainly, it may be difficult for elected officials to discuss explicitly attacks not officially recognized by the White House, but none of these leading conservatives have acknowledged that the Obama administration has been racking up what are considered successes—arrests at home, attacks overseas—in the fight against al Qaeda and its allies. Instead, this pack has repeatedly brayed about Obama’s decisions to end waterboarding and to shut down Guantanamo, depicting these policy shifts as essentially acts of surrender in the struggle against Islamic terrorists. To score political points, they purposefully ignore the battlefield reality. When it comes to what’s truly happening on the ground, for Cheney and the others, it’s all quiet on the counterterrorism front.